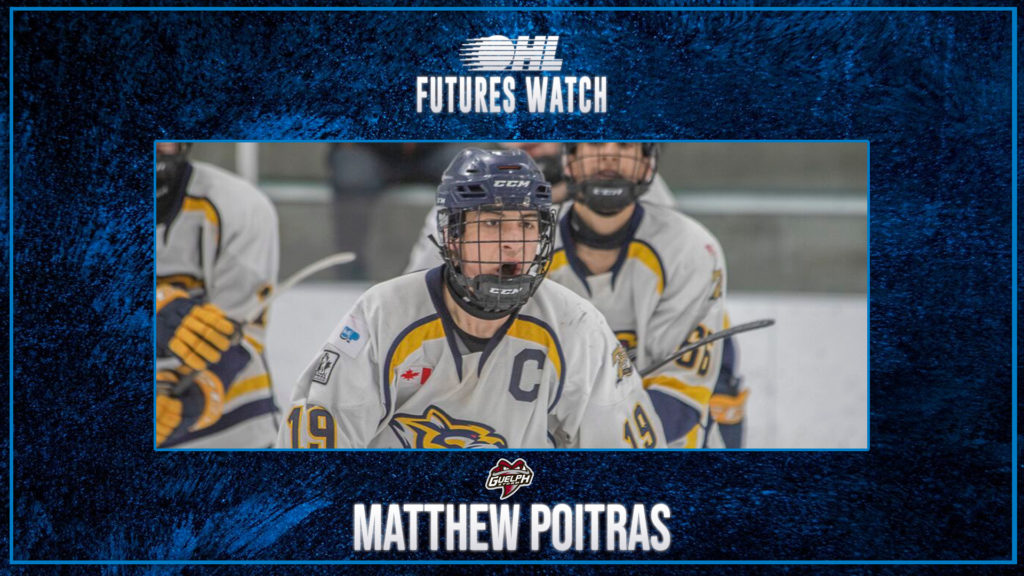 Touted as one of the top offensive talents out of the 2020 OHL Priority Selection draft class, the Whitby, Ont. native joins the reigning 2019 OHL Champions equipped with superb playmaking skills and elite vision. Having donned the C with the Whitby Wildcats over the 2019-20 season where he notched 68 points in 36 games, he brings with him strong leadership skills and a positive energy that can light up the dressing room.

He’s a complete package who has Storm head coach and GM George Burnett confident he can make an immediate impact come puck drop.

“I think he’s very engaging and a very competitive young man. He has a high skill level and he takes a lot of pride in all the different areas of the game. His leadership sets a high example and I think all those things allow him to fit in and take on a role within our hockey club immediately,” Burnett said of the 12th overall draft pick.

For Poitras, who has fond memories attending nearby Oshawa Generals games as a young kid, the opportunity to suit up with the esteemed OHL club located only an hour and a half away from his hometown is a dream come true.

“It’s awesome to be considered one of the top offensive players in the draft class by the team, it’s an honour,” said the 17-year-old centreman. “I just want to show what I can do at the next level, hopefully continue to contribute offensively and focus on other parts of the game I need to improve on.”

#OHL Futures Watch 👀:@Storm_City first round #OHLDraft pick Matthew Poitras (@poitras_matt) is all smiles 😃 as he discusses influences, abilities and his excitement despite a lengthy wait for his #OHL debut with @sarahjeanmaher 🎥 pic.twitter.com/7v6hcV2rFs

Awaiting word on the 2020-21 OHL season, Poitras has spent a lot of time in the gym putting on weight and gaining strength. While provincial COVID-19 regulations have kept he and his teammates from meeting or skating together in person, he’s had the chance to familiarize himself with the organization virtually on a regular basis.

“We’ve been involved in everything from virtual yoga, to virtual team building to fun games. We’ve tried to cover all aspects of the different things that kids will experience once they’re here and hopefully create an environment that is positive for these kids to participate in and make them feel a part of things before they actually can get here,” said Burnett. “We believe if you’re comfortable with the people and your surroundings, we’re going to get the best out of you. It’s been good and I think Matthew’s benefited from being involved with the other players.”

Since hearing his named called out 12th overall last April, Poitras has kept in close touch with teammate Danny Zhilkin and looks forward to learning from veterans like Keegan Stevenson.

“He was on the team when they won it all so he knows what it takes to win,” he said of his teammate.

The participation from Poitras and his fellow Storm rookies during the team’s regular virtual meetups has also gone a long way with Burnett, who spoke to how impressed he’s been with the young players’ initiative during what has been a difficult year.

“If the young kids in Matthew’s age group are starting to ask questions or have an opinion or speak in front of a group, I think good things are happening and it only means real good things will come,” he said. “I can’t wait to see him on the ice. I know the way he plays and I think with him, there are areas we will hopefully improve on: our compete and skill level. I think he brings elements to both of those areas that will be beneficial not only to him but to our program.”

While he continues to prepare for his OHL rookie debut in Guelph, Poitras shares Burnett’s confidence in his ability to help the team improve.

“My talent, my hard work and winning puck battles will contribute to offensive success. I’ll fit in well with the system and it’ll work out,” he said.

And in tandem with his offensive flare, he’s also confident his positive energy will help the team continue to live up to their winning ways.

“I just like to be a fun guy and keep it loose before games,” he continued. “I don’t like to be too serious because if you’re too serious you might grip your stick a little too hard and not play the game you want to play. If you work your hardest every shift, it’ll show others to do the same thing and just create a winning mentality in the locker room.”