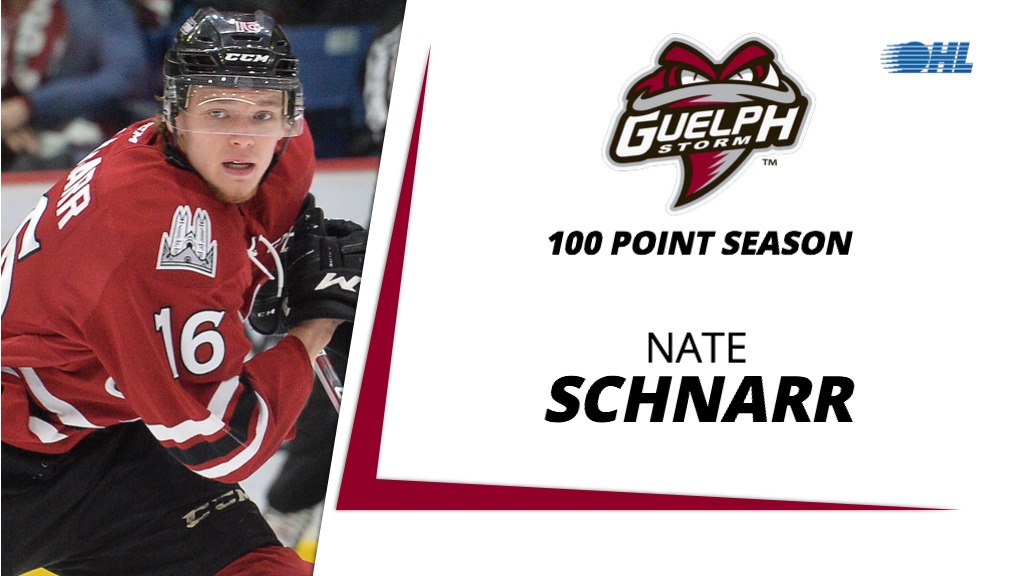 Part of a star-studded lineup in Guelph alongside prominent names in Nick Suzuki and Isaac Ratcliffe, Arizona Coyotes prospect Nate Schnarr is the first Storm player to hit the 100-point mark this season.

The 20-year-old from Waterloo, Ont. entered triple digits on Saturday, recording a goal and an assist in Guelph’s 7-2 road win over the Owen Sound Attack. Schnarr stretched his point streak to nine games, increasing his overall production to 100 points including 32 goals, 68 assists and a plus/minus rating of plus-42.

Keep it 💯 @ArizonaCoyotes #Prospect @Schnarzy68 officially has 100 points on the season! #IamtheSTORM pic.twitter.com/60VaHrhC0H

Schnarr records the 11th 100-point season in Storm history and the first since Scott Kosmachuk of the 2014 OHL Championship team. His 68 assists currently sit second in the OHL and are the most by a Storm player since Jeff O’Neill (81) in 1994-95. He becomes the sixth OHL player to record 100 points this season.

A 6-foot-3, 190Ib centreman, Schnarr has 179 career points (67-112–179) in as many OHL regular season contests. He was Guelph’s third round pick in the 2015 OHL Priority Selection from the Waterloo Wolves Minor Midgets.

The Arizona Coyotes selected Schnarr with their third round (75th overall) pick in the 2017 NHL Draft.