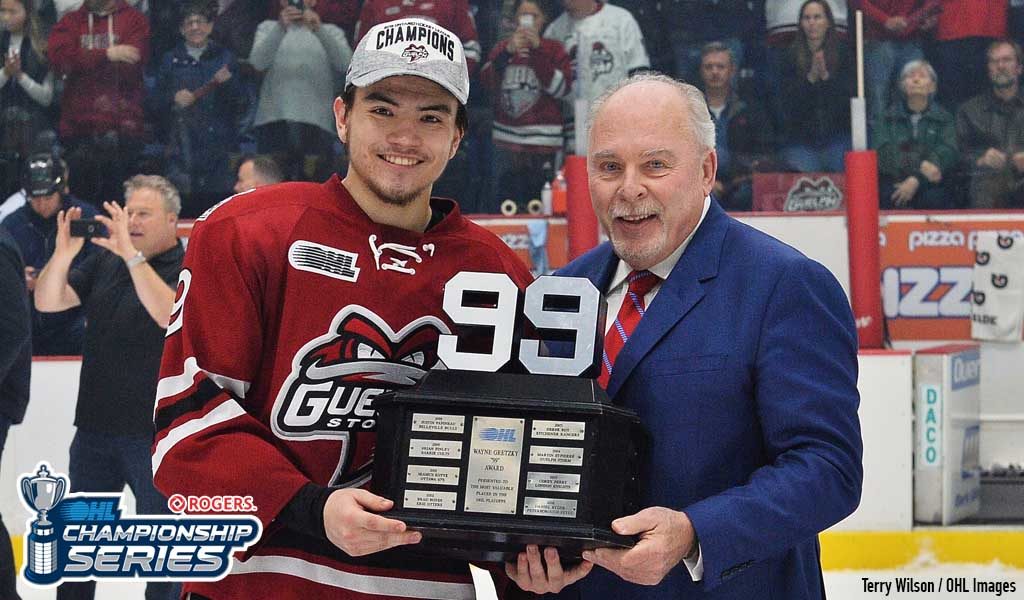 Guelph Storm forward Nick Suzuki has been named the Most Valuable Player of the 2019 OHL Playoffs and is the recipient of the Wayne Gretzky ’99’ Award.

The Montreal Canadiens prospect finished the OHL Playoffs with a Guelph Storm franchise record 42 points including 16 goals and 26 assists over 24 games. Suzuki put up 11 points (3-8–11) over six games in the Rogers OHL Championship Series.

“It’s been unbelievable for me coming here with everyone,” Suzuki said post-game. “This was the goal when I got traded here and to have it happen is unreal. I couldn’t have done it with a better group of guys.”

The 19-year-old former first round NHL Draft pick had tremendous success on a line between big wingers Isaac Ratcliffe and MacKenzie Entwistle. He found the back of the net for the 16th time on Sunday, setting a new Storm record by eclipsing the prior mark of 15 held by both Todd Bertuzzi (1994-95) and Brian Willsie (1996-97).

“The chemistry that we have together is unbelievable,” said Suzuki. “Ratty and Entwistle are two great players, easy to play with and even better guys off the ice so we all get along.”

A midseason acquisition from the Owen Sound Attack, Suzuki had points in 21 of his 24 playoff contests including 12 multi-point efforts. He finished tied for the league-lead with four game winning goals and finished second with 95 shots on goal. His league-leading 42 playoff points are the most since London’s Mitch Marner (16-28–44) in 2016 while he also surpassed Martin St. Pierre‘s 2004 franchise record of 35 points.