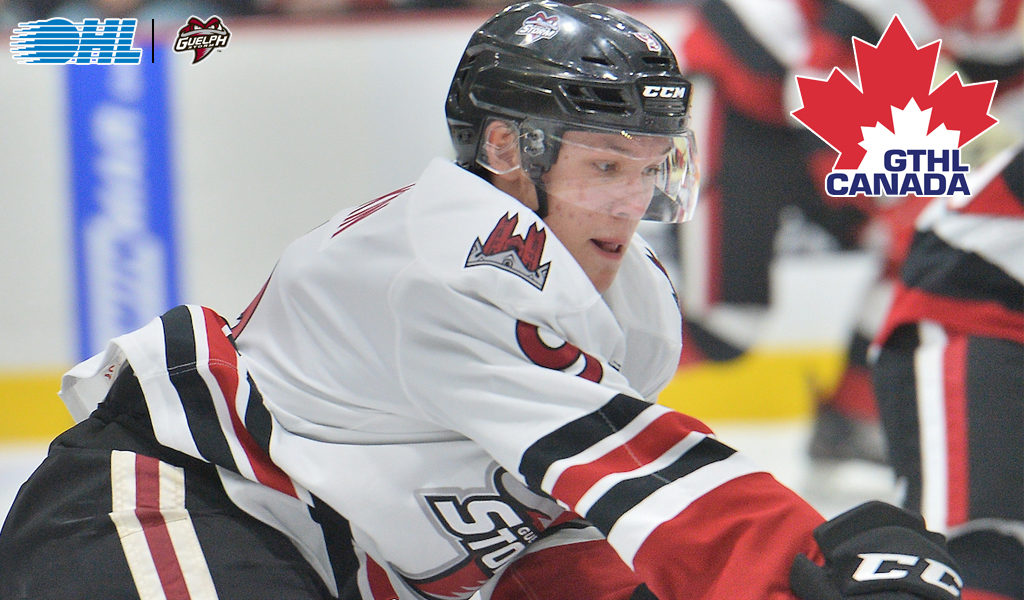 Dating back to his very first OHL shift, Danny Zhilkin had a lot of positives to reflect on over his rookie season.

As he prepares to hit the international stage as one of 13 OHL players representing Team Canada at the 2021 IIHF World Under-18 Hockey Championship later this month, the Guelph Storm forward hopped on the GTHL Instagram account (@GTHLHockey) for a live Q&A with GM Peter Kourtis and Marketing and Communications Coordinator Steph Coratti.

“It’s a great honour, an unbelievable feeling, and a lot of motivation right now to train for sure,” the 17-year-old forward said of his upcoming opportunity.

From his transition to the League, to his first OHL goal, to his love for the city of Guelph, Zhilkin sat down to discuss his 2019-20 campaign ahead of his mandatory at-home quarantine leading up to his travels to Plano, Texas for the tournament.

“I don’t think I realized how far I’ve come as a person and as a player,” he continued. “When I’m on the ice it doesn’t feel like I’m doing anything differently but then I watch videos of myself and it looks like I’ve grown a lot as a skater and a shooter. I don’t think there were any surprises, I just have to believe in myself and have that confidence along the way.”

Our Instagram Live with former @TorontoMarlboro and current @Storm_City forward @ZhilkinDanny is TONIGHT at 6pm!

We’ll talk to Danny about recently being named to @HockeyCanada‘s U18 team and more!

Zhilkin was selected 14th overall in the 2019 OHL Priority Selection out of a strong U16 Toronto Marlboros squad where he had impressed with 32 goals and 24 assists for 57 points in 69 games.

“I heard you had to work on your speed a lot because the pace is a lot faster so I was in the gym every day,” he remembered upon making the jump to junior. “I worked on my leg speed a lot and obviously the little things like shooting but the speed is probably the biggest factor.”

The first rounder didn’t waste any time getting to work in the OHL ranks, finding the back of the net in his first shift – a moment made even more magical by the roaring cheers of the Storm faithful.

“I actually got to score on my first goal on my shift so that was pretty amazing. I kind of blacked out looking at all the fans cheering for me, it was unbelievable,” he recalled of his League debut on Sept. 9, 2020 when he opened the scoring just 1:30 in. “It’s a great feeling playing in such a great city. It’s a professional environment and everyone’s so happy all the time in Guelph and it’s such a hockey city.”

Zhilkin totaled 15 points (7-8—15) over his 60-game rookie season with the Storm. Looking back on the year, there isn’t anything he’d do differently.

“I don’t have any regrets from my first year. I didn’t get as many points as I would’ve liked but points aren’t everything. I think I still contributed on the ice. I think it was a great season and I just have to keep working hard,” he said of his opening stint with the reigning 2019 OHL Champions.

“We knew it was going to be a rebuild year, but I think it went really well. We had a lot of great rookies including myself, and we were actually first throughout the first half of the season. The vets did a good job of keeping us up in the play so it was great.”

Among the many standout memories spanning his rookie campaign are his many tilts with the division rival Kitchener Rangers; games that served as opportunities for the veterans to give the younger players, like Zhilkin, a bit of a push.

“I think I like playing Kitchener the most. It kind of helps me to play harder, skate faster and shoot harder,” he said of the rivalry.

With a successful first season long in the books, all focus is now on striving for gold. Zhilkin has been maintaining his online workouts and shooting pucks consistently to stay hockey-ready ahead of the U18s. Following a week-long quarantine at home, Zhilkin will fly to Texas and then quarantine again for four more days before a pre-tournament camp beginning April 21 where he’ll be reunited with a pair of old Marlboros teammates in Ethan Del Mastro and Wyatt Johnston.

Though he hasn’t played an OHL game in over a year, he’s confident he can pick up where he left off when he faces off against Finland in pre-tournament action on Apr. 24.

“I think that exhibition game against Finland is going to help a lot before the tournament. Other than that I think everyone on the team is staying in shape and will be ready to go. I know I’ll be ready to go.”