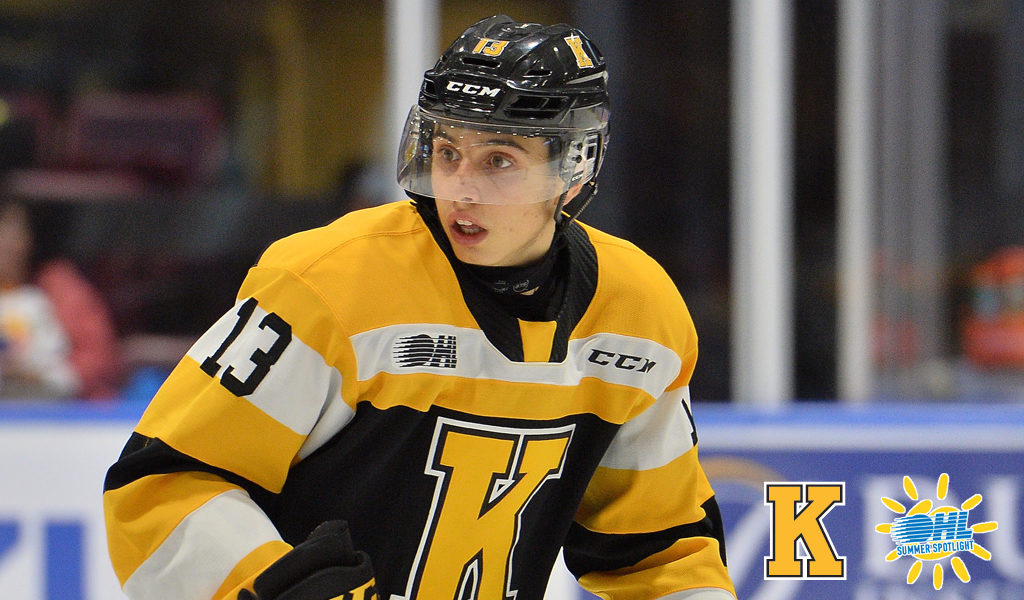 Francesco Arcuri has a talent for capitalizing on his chances when his coaches need him most. After all, he went a perfect 4-for-4 in the shootout last season – the most ticks by a 16-year-old skater since the shootout’s inception in 2005-06.

It’s a feat he wants to carry over next year as a key part of the Kingston Frontenacs’ future success, and he’s confident in his ability to do so.

“I’m fast, I’m powerful, I can score goals,” said the 17-year-old forward of his ability.

Arcuri’s summer focus has been getting bigger, faster and stronger – something every OHL rookie wants, as he put it. He’s been regularly training with his skating coach, Dawn Braid, and working out with Derrell Levy at In-Tech High Performance Training.

Heading into his sophomore stint following a 20-point (7-13–20) production in a 60-game rookie campaign, he’s ready to be a leader. That means showing his teammates he can continue to score in big moments and taking on a more vocal role. As far as he’s concerned, it also means becoming one of the top players in the league and a top pick at the 2021 NHL Draft, the latter of which is always back of mind.

“Next season is a big step moving forward for me in my career in terms of being a leader, for my teammates and for continuing to have my coach trust in me,” Arcuri said.

Coming out of a tough 2019-20 campaign that saw the Fronts barely sneak into the Eastern Conference’s eighth place seed when the season came to its early ending, the organization has made prime moves in the extended offseason. Among those moves has been the return of head coach Paul McFarland.

Just 16-years-old and already showing signs of being a shootout specialist, @KingstonFronts rookie Francesco Arcuri’s (@FArcuri13) four shootout markers are the most by a 16-year-old rookie since the establishment of the shootout in 2005-06. pic.twitter.com/zeVO2S6qCu

McFarland’s impressive coaching resume on the Toronto Maple Leafs bench has Arcuri excited for what he’s confident will be an impactful season for the Frontenacs.

“I think we’re ready to explode next year,” he said. “We have a long of young pieces and we’re full of talent. We’re going to make a big impact coming up.”

Of course, playing alongside exceptional talent Shane Wright – an opportunity he’s had since their shared GTHL and OHL Cup championships with the Don Mills Flyers over the 2018-19 season – makes that objective easier. Looking back, sharing the OHL Draft experience with Wright made the transition to the league easier as well.

“Coming in to the OHL, you want to know you have good guys going to your team. It’s always nice to go with a friend,” said Arcuri of his long-time teammate. “We have a lot of chemistry together and, moving forward, we’re going to work together to take the team to another level.”

And that strong chemistry extends to the whole team, both on and off the ice.

With an up-and-coming squad that includes the likes of top pieces Zayde Wisdom and Martin Chromiak as well as a slew of solid returnees that include Nick Wong and Jordan Frasca, Arcuri’s ready to turn that chemistry into wins.

If part of earning those wins means continuing to own that role as a shootout specialist, even better. After all, it’s a testament to the coaches’ trust he’s been working hard to maintain, and paramount to turning heads as a top OHL skater and a top NHL draft pick.

“The coaches want to win games and they had trust in me so they put me in the shootout when we needed it,” he finished. “Whatever the coaches want or need me to, I’m doing to do it the best I can. And it just so happened with shootouts, I always capitalized on my chances.”