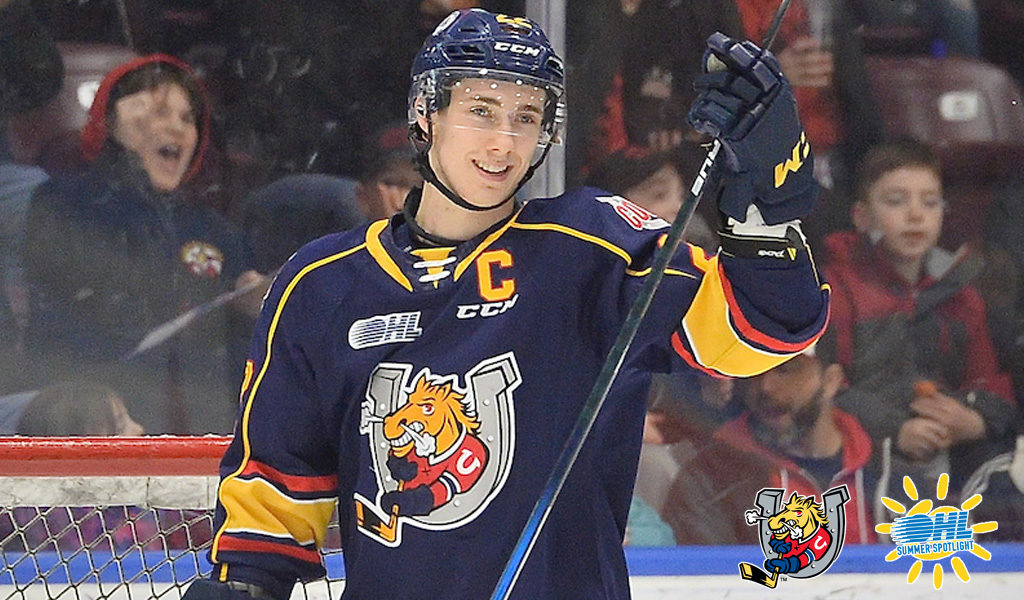 Luke Bignell knows a thing or two about leadership. Now, he’s putting the knowledge he’s gleaned from his father and older brother into action.

The OHL has been a family affair for the Bignells, with father Greg patrolling the blue line for the Belleville Bulls from 1986-90. He had coaching stints in Kitchener, North Bay and Kingston between 1994-2003 before oldest son Adam followed in his footsteps with the Bulls from 2010-15.

Despite just one goal over five seasons in Belleville, Adam Bignell was a fan favourite at the Yardmen Arena, becoming known throughout the league as an efficient shot blocker and fierce competitor. He was recently hired on by the Waterloo Regional Police  Service.

“I’ve been watching and hearing about the OHL for years, so being able to play has been a dream come true,” said Luke, the youngest of three boys. “I’ll never forget draft day and seeing the smiles of my entire family, it will always be one of my best memories.”

Selected in the fifth round of the 2016 OHL Priority Selection by the Barrie Colts, Bignell has developed into the club’s captain, donning the ‘C’ on his jersey midway through an up-and-down 2019-20 season that included a coaching change and a number of roster moves throughout.

A hard-working, versatile forward with an ability to play centre or the wing, Bignell has set his mind to being a source of consistency for the up-and-coming franchise. He chipped in with a career-high 14 goals and 37 points.

“It was a challenging season, starting with the sad news and absence of Dale Hawerchuk right off the bat,” Bignell recalled. “We really missed him last year.

“There were a number of changes,” Bignell continued. “I thought we had some periods where we played quite well together in the second half and it would have been nice to see how the playoffs panned out.”

The Colts took on quite a different look between opening night and March 12th, the final day of the 2019-20 regular season. Moving on were former first overall pick Ryan Suzuki, fourth-year defender Tyler Tucker, talented forward Matej Pekar and hard-working captain Jason Willms and into the fold came Dallas Stars prospect Nicholas Porco along with some younger talent in forwards Ethan Cardwell and Evan Vierling along with rookie defenceman Connor Punnett. The Colts finished just above .500, sporting a 29-28-4-2 record.

“It was made pretty clear during our exit interviews that the vision moving into 2020-21 and beyond is that we want to be one of the top teams in the Eastern Conference. Everyone knows we need to be bigger, faster and stronger and the extra time off has given all of us the opportunity to work on those things.”

Apart from his daily training regimen, Bignell has enjoyed keeping tabs on an old friend. All he has to do is check out the Carolina Hurricanes on TV to get a glimpse of former teammate Andrei Svechnikov and his inspiring creativity.

“I’ve been watching it every night when he’s playing. It’s pretty spectacular, just the kinds of things he can do at high speed. What’s crazy is that he was that good just a couple years ago playing against 16-year-olds.

“He’s worked hard for it,” he added. “He deserves all of the success he’s having.”

The Colts enjoyed a run of four Central Division titles and an Eastern Conference championship in a span of six years from 2012-18, but with the continued absence of Hawerchuk due to a renewed battle with cancer and a young but developing core of up-and-coming talent, what the club might need most right now is a sure-minded, confident captain.

Bignell will put his mind to the task of leading the Barrie boys into 2020-21, hoping to set the team up for success into the future.

“I think we’re going to be a competitive group for a few years,” said the overage forward. “We want to be winners in the year ahead, and even if I’m not around to see what things look like in the seasons after that, I’d still like to set the tone for a competitive team moving forward.”