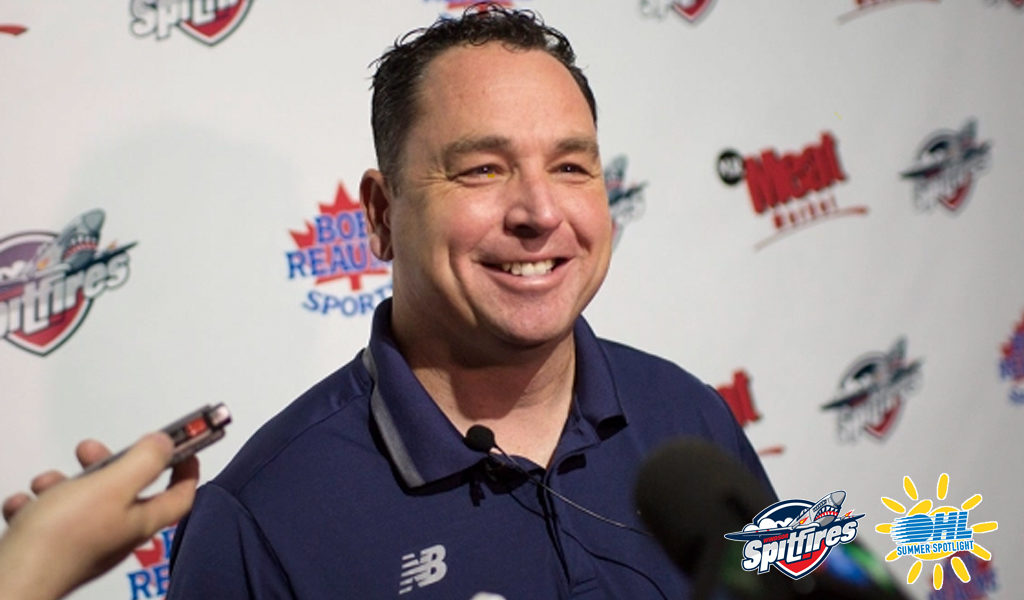 It’s been just over a year since Bill Bowler took over as General Manager of the Windsor Spitfires; an exciting, eventful, rewarding year, if you ask him.

“It’s exciting for me because every day is different. Something new comes up daily, whether you’re dealing with players, families, agents, and obviously scouting,” said Bowler. “As the manager, you have your hands in a lot of different areas of the organization, and coming to work is real fun because it’s different every day.”

It goes without saying he’s had big shoes to fill following the departure of Warren Rychel after a 13-year tenure that saw a resulting 500+ combined wins and a trio of Memorial Cup championships.

The start of a new chapter in Windsor ✈️#OHL all-time assists leader and franchise scoring leader Bill Bowler has been named @SpitsHockey GM and VP of Hockey Operations.

Having absorbed a wealth of information from Rychel throughout his previous coaching and front office roles with the Spitfires, Bowler was confident stepping into the role last summer. A year later, following a season plagued with challenges nobody could anticipate, he still doesn’t hesitate to thank and credit those he’s been able to learn from over the years.

“I’ve been lucky to have access to a lot of information and I’ve had been able to lean on a lot of people,” said Bowler, who was also GM of the Greater Ontario Junior Hockey League’s LaSalle Vipers for six years. “From [Rychel] to everyone involved, you try to gather and absorb as much information as you can and that way when you’re making decisions, there’s some history into what you’re doing and why you’re doing it.”

If you look at the standings, it was undoubtedly a year of improvement from last season. The Spits finished out the shortened 2019-20 campaign at sixth in the Western Conference with 76 points to their names, a 16-point uptick from the previous year’s eighth place showing. But there’s a lot more to running a junior hockey franchise than wins and losses, Bowler emphasizes. As his first order of business, he’s been focused on ensuring that improvement extends off the ice and into a positive player environment overall.

“The biggest thing on my to-do list was to take care of the player environment and create a culture where we want to be an organization people love to work and play in,” he explained.

And just like that, @SpitsHockey are back on top of the Western Conference ✈️@PredsNHL pick @AfanasyevE11 buries the OT winner off a perfect pass from @Angle89Tyler 👌 pic.twitter.com/JuGqQuEasC

With that in mind, the organization has made some strides over the past season. They brought in new staff members including a new Culture/High Performance Coach in Brian O’Reilly, father of NHL forward Ryan O’Reilly and former Spitfire Cal O’Reilly, who has previous experience working with the organization. They’ve also added new off-ice programs and community drivers.

It’s a good start, but Bowler says they still have a long way to go to accomplish what he hopes will be an identity as “one of the best CHL franchises in the league.”

“Only one team wins and only a percentage make it to the National Hockey League, so our goal is to create well-rounded employees and student athletes. When I know our players are leaving our program and speaking highly and giving back to our program, I know we’ve done a good job.”

A former Spitfire skater himself, giving back to the program he once played with is a sentiment he’s, therefore, familiar with. He stands as the OHL’s all-time leader in assists and remains the Spitfires’ all-time points leader at 467 over a four-year career spanning 1991-95. He served as captain in his overage year where he was also awarded the Leo Lalonde Memorial Trophy as the League’s Overage Player of the Year.

“Being a former player for this organization, it’s real important to me that we continue to improve as the Spitfires and as a member of the Ontario Hockey League,” he continued. “As General Manager, it’s my job to ensure that I uphold the legacy.”

Of course, that isn’t to say the team shouldn’t strive to be competitive on the ice – some playoff experience would have been nice, especially for a team that hasn’t won an OHL playoff series since 2011 – but a healthy environment that boasts players who are comfortable and confident will, ultimately, reflect in the standings and beyond, Bowler stresses.

“Because of the group and what we were able to accomplish last year, we want to grow on that, and we’re very comfortable and confident we’ll improve again,” he said of the team. “That’s expected of our group and our coaches, and we anticipate our people and players getting better and improving.”

And watching those players improve in all aspects has been among the most rewarding parts of his role, he says. It’s a large part of how Bowler wants to make his mark in Windsor.

“These are young people that we’re trying to mold into quality individuals when they leave our program,” said Bowler. “You’ll see what the hard work has done.”