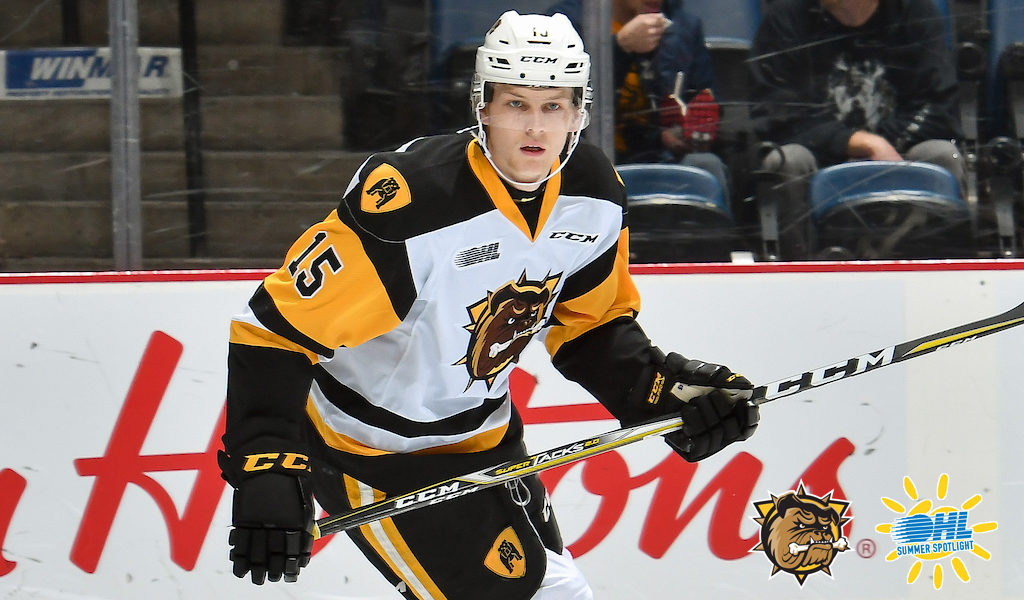 Navrin Mutter stands out on the ice. He likes playing tough in the corners against the top lines, and he’s one of the best in the league at it.

That crash and bang style of play is point of pride for the Hamilton Bulldogs forward, and recognition as the East’s Best Body Checker in the 2019-20 OHL Coaches Poll following a second place finish the season prior has certainly strengthened that pride.

“I think over the years I’ve stated that role very well and I’m one of the best in the league at it,” said the 19-year-old winger. “I take pride in that style of play. Most players don’t, and I know I’m kind of gifted with that.”

Heading into his fourth OHL season, the Lucan, Ont. native is now eyeing a bigger, all-around role and a regular spot in the top six.

“I want to be able to play bigger roles and be a leader on the team, as I know I am,” he continued. “I want to be playing more in the top-six and be that guy who can be relied on to put pucks in the net, too. I think I want to get my game to an overall level in every aspect of the game.”

The 2001-born skater already considers himself a well-respected leader with a knack for lighting up the room with jokes but keeping the tone serious when necessary too.

“I’m very respected in the room. I like to keep the room pretty light and jokey in the morning but there’s also times where I feel like I’m respected enough where I can take control of the room and if we need to be serious, we’ll be serious,” he said.

Part of being a leader means making the younger guys feel welcome, something he’s made a point of doing over the extended offseason.

“It’s great to shoot the guys texts, the new guys coming in. I like keeping them excited for the year and not too worried about meeting the guys,” he said. “I know I’ve talked to [Donovan] and those guys, and as for the younger guys who are on the team now, we’re always keeping in touch and it’s good to get on the ice with a few of them in the summer.”

Dipping his toes in the NHL with the Colorado Avalanche at their development last summer helped strengthen those leadership qualities too. His biggest takeaway? Getting a better sense of the game as a professional.

“It gets really professional and you can quickly see how it’s a job,” he said of the NHL level.

It was an opportunity he got to experience with former teammate Brandon Saigeon.

“It was an unreal time, an amazing experience, and it was cool to share that with Brandon. Just having a buddy there made it more fun,” he said.

Following the Bulldogs’ 2018 OHL Championship came a couple of tougher seasons, but Mutter is optimistic about his team’s hunger for a strong showing in 2020-21.

Hard to the net, soft touch for the finish 👏

“I think we’ll do really well. We’ll be in good shape, we’re getting better every year and I think we could go deep in the playoffs this year and will make a big jump from those last couple years. We definitely want to be above .500 and that’s no question. I think we just have to be dialed in.”

And with those team expectations come individual goals and expectations as well, with sights set on earning that top-six spot sporting a stronger, all-around game. Though he may not be much of a points guy, he’s confident he’ll top off last season’s 20-point showing while maintaining his unique, standout style of play.

“I lean towards getting more points this year because I know I’m capable of it, but I know if I’m going to move on to the next level, it’ll be more of a shutdown role. If I can just keep getting better at that every year, that’s my biggest goal.”