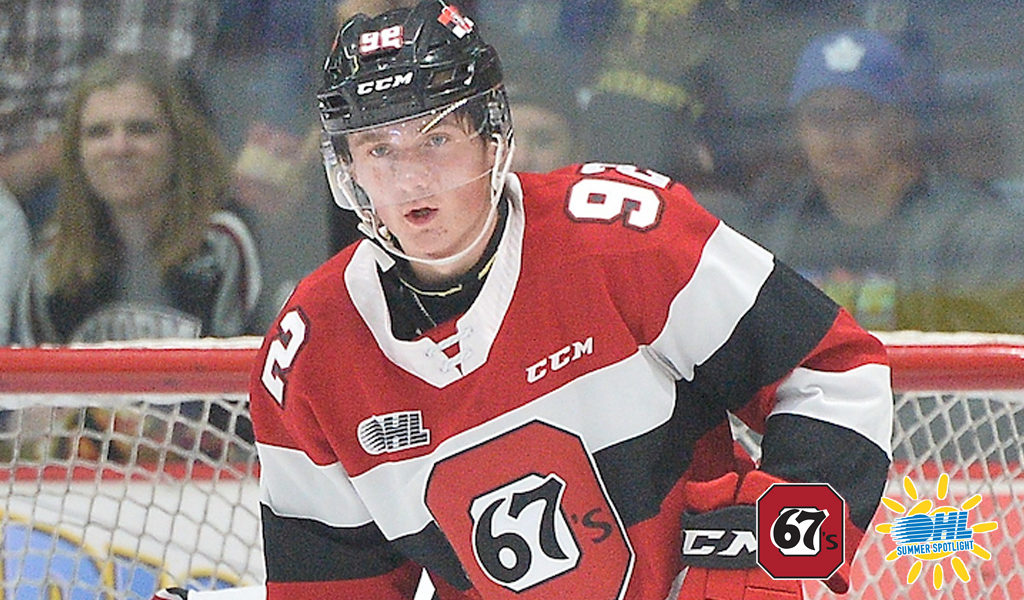 Limited to just 16 games in a season interrupted by surgery to repair a torn labrum, Graeme Clarke set his mind to conquering the challenges set before him and did so with flying colours.

Just months after being selected by the New Jersey Devils in the third round of the 2019 NHL Draft and having the opportunity to attend camp with 67’s teammates Nikita Okhotyuk and Mitchell Hoelscher, Clarke suffered a freak injury on October 14th doing what he loves most – scoring goals.

“Yeah I was off to a great start and then my shoulder went out after I celebrated a goal in Kingston,” he reflected. “As I put my arms back down my shoulder dislocated, which was kind of a carry-over injury from when I hurt my shoulder the season prior. This time I decided it was best to have surgery done to repair the issue, which was a tough pill to swallow but it was the right decision to make.”

Following consultation with doctors, the Devils and the 67’s, Clarke went under the knife in October with a timetable of 4-6 months to return to the lineup.

“The fact that he came back way ahead of schedule points to the dedication that Graeme applied to his physiotherapy and recovery,” said 67’s general manager James Boyd of Clarke, who needed the minimum four months to get back to playing condition. “That’s kind of become a trademark of Graeme in our organization. He’s got this laser focus that when he decides to do something he applies himself, sticks to a schedule and tight regime whether he’s rehabbing an injury or working on his shot after practice.”

Clarke missed a total of 46 games between October 14 and February 25. He only needed just shy of three minutes to score in his return, lighting the lamp against the same Frontenacs as part of a three-point effort in a 7-3 win.

“Yeah that one felt good,” he recalled. “All of that hard work paid off.”

The 19-year-old was quick to extend thanks to 67’s athletic therapist Dan Marynowski, who spent countless evenings at the rink working with Clarke as he built up strength in his shoulder.

“Guys like Dan do a lot behind the scenes that they don’t always get credit for. He spent a lot of time in the treatment room with me, putting in extra hours to make sure I got back into the lineup and I’m very thankful for that. I’m also grateful to the Devils and the 67’s for the patience and care they showed throughout the whole experience.

“I had opportunities to work on stuff while I was injured that I may not have been able to do otherwise,” Clarke continued. “Certain areas of strength and just working on my skating were all things I invested a lot of time in while I was out of action and I feel like the work I put in is going to continue paying off into next season.”

Clarke registered eight points over seven games post-injury before the season was cancelled due to the COVID-19 pandemic. Like the rest of his 67’s teammates coming back for 2020-21, there’s definitely a sense of unfinished business after the Barber Poles recorded a second straight 50-win campaign only to have the chase for a championship cut short.

Expected to be a big part of any success the 67’s have in the coming season, he’s spent the extended offseason at home in Ottawa with kid brother and Barrie Colts defender Brandt preparing himself for what comes next.

First game back and the @NJDevils prospect has his @Ottawa67sHockey up nice and early 👊 pic.twitter.com/SUj92Z5s8r

“At the start of the pandemic things were a little slower so we played a lot of ping pong  and shot pucks and stuff like that, but now that things are picking up and we have a targeted start date, we’re both working out and on the ice a lot,” he said. “He gets on my nerves sometimes,” he added with a laugh, “but that’s okay.”

The elder Clarke will slot into an Ottawa forward corps with minutes opening up following the graduation of overagers Austen Keating and Joseph Garreffa. Nobody’s sure where reigning OHL Most Outstanding Player Marco Rossi, a top prospect for the 2020 NHL Draft, will land.

“It’s almost like making a blockbuster trade in the offseason and adding a couple really good players to your lineup,” said GM Boyd of the presence of Clarke and fellow injury returnee Dylan Robinson poised to start the new season at 100 percent. “Graeme has shown a lot of resilience through what he overcame last year, and we’re all looking forward to seeing what he’ll do when the season starts.”

OHL Mourns the Loss of Bob Nevin
7 hours ago