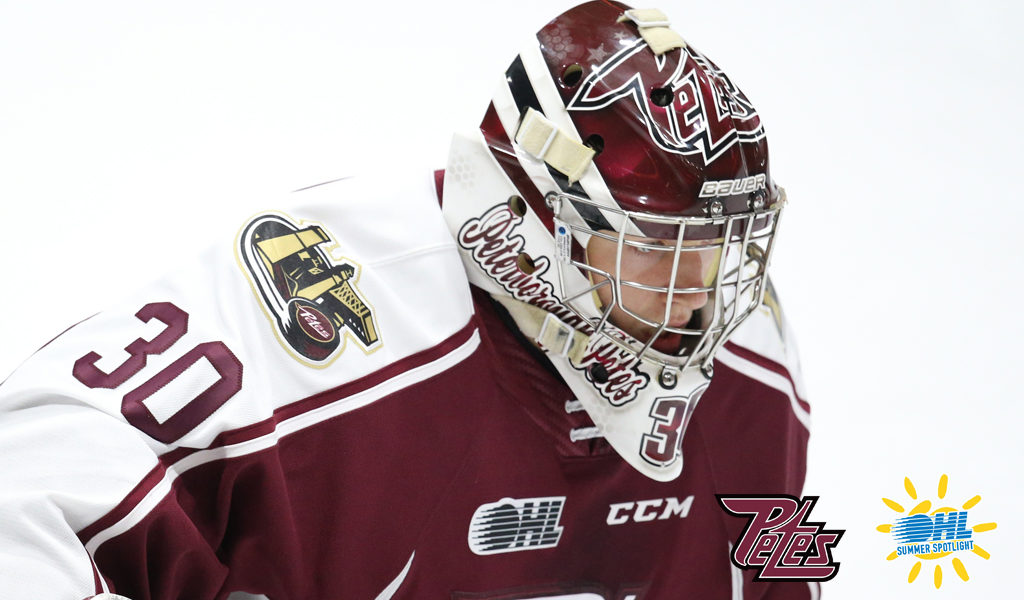 Tye Austin has been putting in the work.

The 6-foot-5 Peterborough Petes goaltender been making the most out of what has certainly been a strange past few months. Without the typical gym setup for most of the extended offseason, he’s been finding different ways to work out which, he says, has improved his athleticism and his control on the ice.

“I think I’m more of an athlete now,” said the Petes puckstopper from his home in Dunrobin, just outside of Ottawa.

His work ethic, both on and off the ice, is a point of pride. He was named to the OHL Scholastic Team in back-to-back seasons, a testament to his hard work and his desire to put 100% in everything he does.

“I treat school like hockey,” he expanded. “I do all the extra work and give 100% with everything I’m doing, just like I do with hockey. I take pride in the skills I’ve learned from it as well, like organization and being independent, and I bring those skills back and forth between the two.”

Following an exciting season that saw the Petes finish second in the Eastern Conference, the team will be losing some key pieces heading into 2020-21. After suiting up for only 17 games last season, Austin is looking forward to taking on a bigger role in net. It’s an opportunity well-earned for the 18-year-old goaltender, says Petes head coach Rob Wilson.

“18 seems to be the year when goalies come into their own. Tye has waited patiently for his opportunity. He’s not a guy to take time off when it comes to school or practice time, and to balance both is not easy. To have the ability to do that speaks volume of his discipline and his value on his scholastics but also on hockey. He’s been very impressive that way,” said Wilson. “He’s a very big body, for one, which everybody knows, but size is an important factor now as a goaltender.”

Patience is key in growing and developing as a goaltender; Austin knows that. He’s also learned a lot from his past two seasons as a backup. “You can learn a lot from staying back and having that patience and learning from someone who’s older and who has done that.”

We’re happy to recognize this year’s Bobby Smith Trophy nominees from each #OHL club. A big congratulations for all your hard work and excellence both on the ice and in the classroom! pic.twitter.com/H7AEjlVtMx

Having a guiding force in Hunter Jones has been a big help.

“Being behind Jonesy the last couple years, I’ve been able to learn a lot. He acts like a pro and next season I want to perform like a pro on and off the ice,” said Austin of his fellow netminder.

“He’s an open guy, he’s a good guy to talk to. I think I’ve learned his habits and his routines. He’s consistent and focuses on his body and that’s why he’s able to perform so well. On the ice he’s so calm and controlled. I think that’s something I’ve adopted from him. It’s something I’ve been able to bring in to my game as well and it’s helped me.”

Of course, Austin is far from the only player stepping into a bigger role next season. He’s confident in the younger guys’ ability to step up and has faith the coaching staff’s plans will lead them to a successful campaign.

He’s also confident in his ability to, like Jones, be a leader on and off the ice.

“I’m playing a complete different position than a lot of the other guys so it’s hard to relate, so I think the biggest thing is leading by example off the ice and encouraging guys on the ice,” he finished. “Doing the extra stretching and showing others how to treat your body so you can perform at the best level, and then getting on the ice early and encouraging the younger guys to get a couple extra reps in before and after practice.”