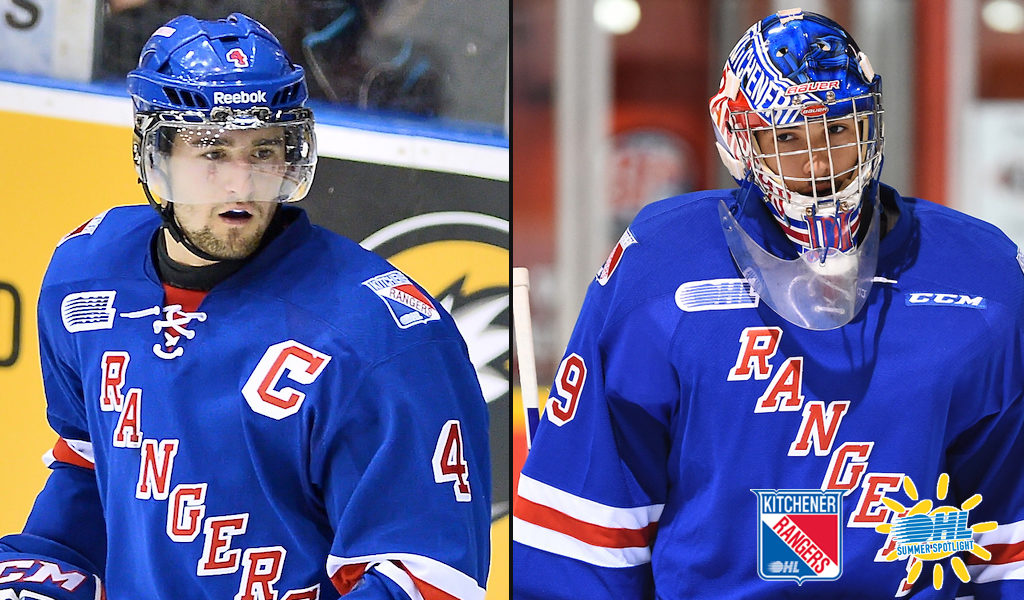 A shoulder to lean on. A voice to be heard. An ear to listen.

For whatever it is a player may need, a pair of Kitchener Rangers graduates are making themselves available.

Last month, the team announced the launch of their Alumni Mentorship Program as a resource aiming to connect current players with team alumni. Former captain Ben Fanelli and goaltender Jordan DeKort were named the program’s inaugural mentors over the next two seasons.

Being able to reach out to someone who has been in their position has a lot of value, stresses Fanelli, who played parts of four seasons between 2009-14 and served as the captain over the 2013-14 campaign.

“I think people seem to forget these athletes are human too and they’re not immune to the adversities that exist in life and certainly exist in adolescent years into the early twenties,” he said. “So it’s about bringing that human side back into the locker room that sometimes is absent just because of how serious things can get and how much value we can put on this game.”

DeKort suited up in net for 34 games with the Rangers as part of a four-year OHL career and, like his former teammate Fanelli, is looking forward to sharing his experience in the league with the Rangers’ current and upcoming squads.

“I think one thing we’re both excited about is that it gives another outlet to the players,” said DeKort. “I know when I played that would’ve been very important and would’ve been something I would’ve taken advantage of. So we’re hoping to provide those resources, that’s something Ben and I both feel is super important.”

Fanelli and DeKort will be accessible to players on a regular basis, either one-on-one or as a group, and will be speaking to the whole team at least three times throughout the season. The goal is to build trustworthy relationships with the players and help out where possible.

Regardless of how those relationships foster over time – whether it’s through monthly visits in the locker room, regular phone calls, or coffee dates – Fanelli wants to ensure the process remains a simple, informal one.

“I said to [McKenzie] out of the gates that I want this to be simple because the more complicated you make it, the less authentic it becomes and the less impact it has,” he said. “It’s about friendship.”

Happy and humbled to be a part of this outstanding opportunity. https://t.co/Xc5IwW6LP1

“Jordan and Ben have played in the league as Rangers and have personally experienced the highs and lows of playing at such a high level. They are both a perfect fit for this role, and we are excited to launch this program,” said Head Coach and General Manager Mike McKenzie in a release.

Upon graduating from the OHL and overcoming a severe brain injury, Fanelli has embarked on a new chapter as the organizer of Heroic Minds where he works as a motivational speaker, hosts his own podcast and has launched his own clothing line.

DeKort has also gone on to create his own program, Gamechangers, aimed at empowering young athletes through interactive workshops.

The newly launched alumni mentorship program is a win-win for both former players, who anticipate the opportunity to returning to the Aud and getting involved with the Rangers organization once again; an experience they both look back on fondly.

“Selfishly, I’m looking forward to being back in an awesome locker room and culture that I obviously will always have a place in my heart for,” said Fanelli of the opportunity. “If I can make sure their players and employees have a smile on their faces and are feeling good and relaxed, if I can do that in the locker room, it’s the least I can do to return the favour after all the incredible things they’ve done for me.”

Growing and improving on the player experience is a priority for the organization, Rangers Chief Operating Officer and Governor Joe Birch said in a release. Going forward, both Fanelli and DeKort are hoping other teams put forth similar programs and offer the same support to players.

“I’m really proud of the Rangers for taking steps to create programs like this that are really going to help the players and create a better atmosphere for everybody,” said DeKort.