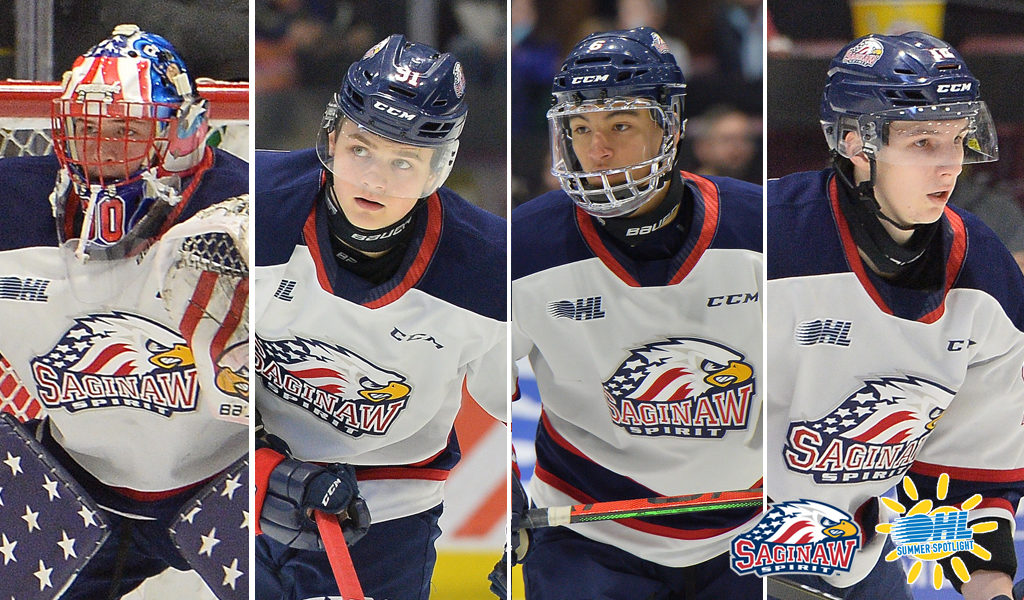 In these unfamiliar times, four Saginaw Spirit teammates were happy for a bit of familiarity.

It’s the first step toward cracking the final World Junior team come tournament time, and a dream come true for all four players.

“It’s a really cool moment whenever Team Canada calls you to participate in that camp for the whole week and listen to all the great speakers and goalie coaches,” said Lennox, the Spirit’s 17-year-old goaltender.

Getting to attend with three of your teammates is a bonus.

“It’s every kid’s dream to play for the world juniors with Team Canada so what could be better than doing it with your own friends, your own teammates, right?” said Millman, who was a later addition to the camp.

“I’ve always kind of been the underdog throughout my hockey career, so to get invited late is kind of typical me. I look at it as there’s definitely someone who wanted me there for a reason and someone who pushed for me to attend.”

For Perfetti, one of this year’s top NHL Draft prospects, it’s also the first step toward some unfinished business after being cut from last year’s roster in December.

“It’s the first thing to check off before making the team so that’s my main goal after being cut last year,” said Perfetti. “It’s important I had a good camp, showcased myself as much as I could with the limited time. I trying to do whatever I can to express I’m a good fit for the team.”

Of course, making an impression had to come about a little differently this year. The annual camp was completely virtual this summer, without any on-ice component due to the ongoing COVID-19 pandemic. It was a definite learning experience, but in some ways, it offered the attendees a head start, said Perfetti.

16 #OHL players have been invited by @HockeyCanada to take part in their virtual National Junior Team @SportChek Summer Development Camp.

“Once we get to camp and to the real tournament, we’re not going over that and slowing down by having to go over our systems again. We already covered that. We already know how we want to play, we know what we need to do. It was a lot of information and you had to retain a lot, but it was very beneficial for everyone to have that head start to how we want to play and how the team’s going to be run.”

Getting that head start is very beneficial, echos Millman.

“The summer camp this year was more of a learning experience, seeing who can retain information and who’s paying attention and that way everyone, come December, has a head start on all the packages so they can learn,” said the Philadelphia Flyers prospect.

Morning workout activations, team building activities via Zoom, guest speakers, and other various online education sessions were among the components of the virtual camp that wrapped up July 31. The days were long but the lessons were invaluable, and while the players weren’t on the ice – let alone face-to-face in the same room – they were well engaged throughout.

“The virtual camp was very well put together, they put in a ton of work to make sure we interacted throughout the camp to keep us engaged at all times during the seminars and meetings,” said Suzuki, a first round Carolina Hurricanes draft pick who also attended last year’s summer camp.

“There was some review of camps from the past, but any time I’m with Team Canada, you can tell from the second you talk to anyone from the organization they are first class.”

With its lack of on-ice portion came its inevitable challenges, but Lennox isn’t too worried about remaining roster-ready as he prepares to suit up in net for the season’s proposed December start.

After a 44-point season, @NHLFlyers prospect @Mason_Millman of @SpiritHockey has been added to @HockeyCanada’s National Junior Team Summer Development Camp.

“The biggest thing for me is going to be facing all these top players again, like facing all the shots and catching myself back up to the pace that I was at,” Lennox said. “Sometimes I don’t always have Cole Perfetti or Ryan Suzuki shooting on me, so I have to get back to that and I think I can do that pretty quick.”

And while repetition is a key component in development, as Perfetti points out, the Hockey Canada staff were able to paint a clear picture of the kind of game they’re looking for.

“I think they did a good job showing clips and on-ice examples, which made it clear as to how they want us to play and made sure everyone had a good understanding of what they want to do,” explained Perfetti. “I think they did a good job without being able to go on the ice and ensuring everyone is able to retain that information and not taking any strides backwards.”

With all of camp’s information retained, the work toward cracking that final Team Canada roster and fulfilling a shared childhood dream continues. And fact that four Spirit attendees get to share in that experience together – the most attendees of any CHL team – is no coincidence, says Perfetti.

“It’s a true testament to how we run things in Saginaw,” he spoke of his team. “They do things the right way there and they prepare the players.”