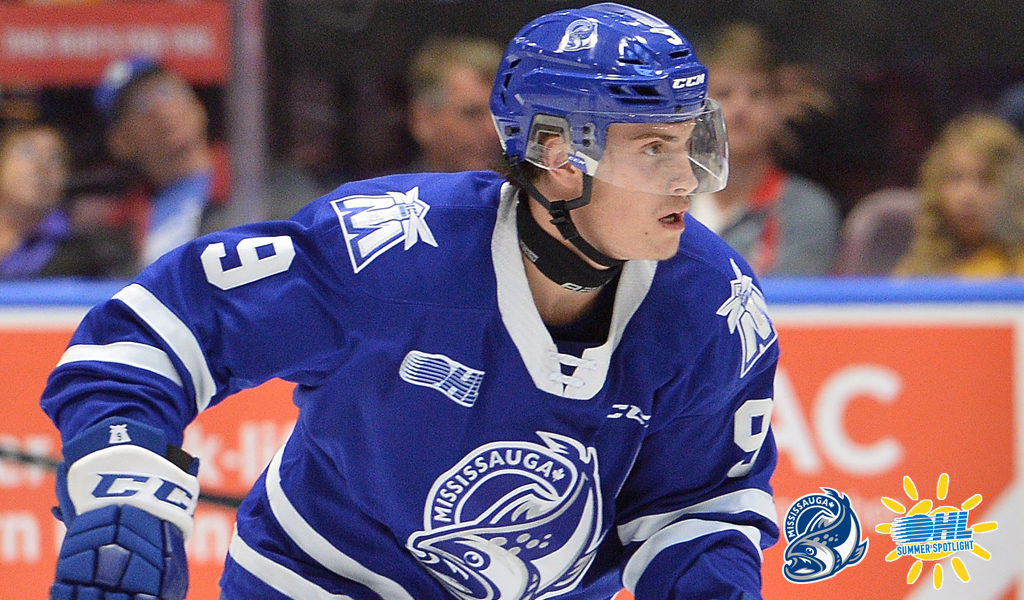 If you ask Keean Washkurak about his greatest hockey influences, there’s a particular memory that sticks out in his head:

He’s with the Waterloo Wolves back in his minor hockey days. He has a pair of goals and is gearing up to take a penalty shot. Before driving to the net, he looks to the crowd and sees his father, Joel, looking up at him, arms crossed and eyes focused on the game. Seconds later, he earns the hat-trick.

The nearly 19-year-old Mississauga Steelheads centreman has always touted his father, a former Kingston Frontenac and a long-time OHL official and referee, as the biggest influence on his career.

“It’s kind of a little competition at this point that we have. He kind of chirps me about how he played and how tough he was. I always say ‘just look at the points, Dad,” he joked.

“He’s always been a hard-working guy and that’s what I’ve taken from his playing style.”

The importance of hard work is among the many lessons he’s learned from his father’s countless days at the rink. He’s always considered himself a hard-working player; in fact, it’s an identity he’s worked hard to establish, and one that’s earned him recognition as the East’s Hardest Worker in back-to-back seasons.

“It was a great honour hearing I had won it for the second year in a row. It made me really proud, it made my dad really proud,” he said of his consecutive OHL Coaches Poll honours.

“Establishing that identity is a big thing for me. I’ve carried it with me throughout my life, not just in hockey but in life, and bringing that mindset into hockey has made me the player I am today.”

Hard-working @StLouisBlues prospect Keean Washkurak (@washer_9) of the @OHLSteelheads credited his father Joel, a former #OHL forward and official for contributing to the way he plays today.

Washkurak is a complete 200-foot centreman; a playmaking forward who sees the ice really well. Back home in Waterloo for the extended offseason, he’s been on the ice, working on his patience and confidence with the puck. You should always be working on those, he says.

He’s a big goal-setter. With the 2020-21 season set to start in December, he wants to be an over-a-point-per-game player; something he was able to do last season, having put forth 52 points over a 49-game stint as a member of a Steelheads squad he deeply believes in.

“We gelled really well last season,” he said of his teammates, pointing in particular to the close bond he has with Steelheads top scorer Cole Schwindt, with whom he’s played against since he was seven years old.

There’s no knowing if the Steelheads would’ve made a deep playoff run, coming off a 27-29-4-1 season at sixth in the Eastern Conference when the OHL season was halted, but Washkurak is confident his team would’ve made a name for themselves.

“We really have a close tight-knit group. Every guy is feeling very comfortable throughout our room and that really shows on the ice.”

Admittedly, Washkurak is a quiet guy. As one of the older players on the squad next season, he has another goal: to use his voice more and be a leader the younger guys can depend on. He admires the leadership of a player like Ryan O’Reilly, who won the Stanley Cup with the St. Louis Blues days before Washkurak would be selected by the Blues 155th overall at the 2019 NHL Draft.

And the pick is in! #stlblues #NHLDraft pic.twitter.com/ZYzRYWOsKV

After attending the Blues’ rookie camp last summer, Washkurak knew he had a lot to work on to be able to compete at the NHL level; another goal of his. Among his takeaways was the incredible speed of the game, both on and off the ice. He made note of the “little things” that, he says, not too many people can pick up on; things like attacking guys with the puck, closing on them quickly, making quick, heads-up plays.

“They can see different things and make different plays, it’s way quicker in the NHL and they’ve adjusted to that. That’s basically what being a pro is.”

With sights set on a pro career, last year he put in extra workouts before and after practice. He spent a lot of time improving on faceoffs or those tight spots around the net to create more chances and goals, and he honed it on those “little aspects” of the game he caught wind of at the NHL level.

Ultimately, he believes, that work ethic his father has always instilled in him will get him there.

“I want to carry that on throughout my OHL career and, if it happens, my pro career,” said Washkurak. “A lot of guys love having that hard working guy that’ll do anything for their team.”