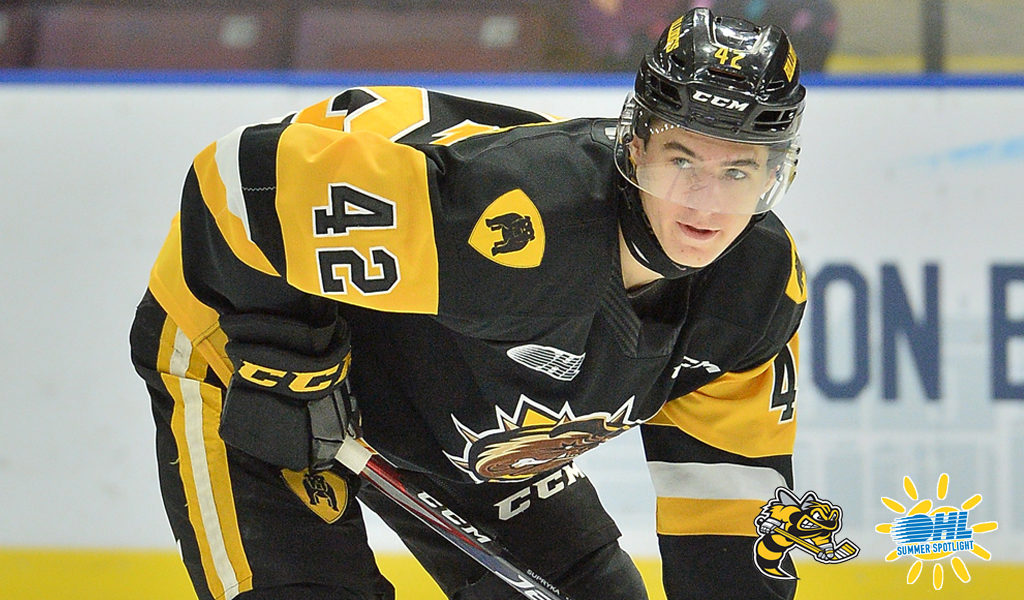 Cameron Supryka is ready to get things going in Sarnia.

After bouts with the Peterborough Petes and Hamilton Bulldogs over the past two years, the 18-year-old defender has found a new home with the Sting for his third OHL season.

Described by Sting GM Dylan Seca as a “well-rounded defender” and a “player the group has coveted for some time” in a release back in June, Supryka is excited about the opportunity for a fresh start on a squad looking to turn things around following a last place finish in the Western Conference last season.

“I think they underachieved last year from what their potential really was. That’s what’s even more exciting for me,” he said.

The Belleville native was traded this summer from the Bulldogs in a swap that sent fellow defenceman Colton Krammerer the other way. Joining the other conference means playing in a lot of unfamiliar rinks, but Supryka is looking forward to the change in scenery. He’s also confident about where he fits in.

“I’m just thinking that now I’m getting my opportunity to play. I think I have a lot to prove to everyone,” Supryka said. “I’m a really good skater and I think I can play a two-way game that is solid and exactly what Sarnia needs to fill some holes in their d-corps.”

And with a fresh start will hopefully come the opportunity to see postseason hockey for the first time in his OHL career.

Supryka’s 2018-19 campaign ended early when he was sidelined with a facial injury in early March preceding the Bulldogs’ first round playoff exit at the hands of the Ottawa 67’s. A groin injury then cut his stint short this past February before the remainder of the season was cancelled due to the COVID-19 pandemic. They were small injuries with bad timing, but Supryka chooses to look at the silver lining.

“Both injuries have helped me lead into my summer training and kept me motivated throughout the summer to get back on the ice and prove people wrong,” he said.

With a December 1st start date on the horizon, Supryka has been working hard on getting his conditioning back up to be able to play high minutes. He went into the offseason looking to improve his stick tactics and placements. Having switched to defence only about 4-5 years ago, he’s been working hard on the defensive side of his two-way game.

The off-ice portion of his training has been going well too. He’s been working alongside his stepmom, Jillian, who is a nutritionist with the Ottawa Senators, as well as his father Jason, who worked as an assistant coach for the Belleville Bulls before the team’s relocation to Hamilton. Of course, spending a lot of time around the Bulls growing up did wonders for his development too, says Supryka, who would often pick the brains of his father and brother, Josh, who played 19 games with the Kingston Frontenacs back in 2016-17 and currently plays for Carleton University.

“Being around the game and the atmosphere definitely helped with my own development,” he said.

He has fond memories of watching Bulls practices after school, getting to go on the ice when they wrapped up, and sometimes joining the team on the road as a stick boy, all while fostering a dream of his own to play in the Ontario Hockey League; a dream that was strengthened by the friendships he formed with some of the other players that came through the Bulls system. He looked up to P.K. Subban, who he recalls always went out of his way to talk to him and even visited his school to read books to his grade two class. He became familiar with P.K.’s two younger brothers, Malcolm and Jordan, as he got older and found himself spending more time at the rink chasing that dream.

Niki Petti is another player that stood out.

“Niki would always go out of his way to ask me if I needed anything. Even when the Bulls moved to Hamilton, I remember Niki stayed in touch with me and would ask me if I needed any sticks or skates,” Supryka remembers. “Those guys definitely made me want to be in the position they were in one day, helping out other kids and making other kids feel the way they made me feel at the rink every day: happy and always wanting to be around them.”

It’s those kind of sentiments that Supryka carries with him as a player today, and as one of the older players heading into Sarnia next season, he wants to be there for the younger guys in a similar type of way. Priding himself on having a good work ethic, he also wants to bring with him some of the hard work tactics he’s picked up over his previous two stints on two different teams.

“I remember Dylan Wells was always the last guy at the rink every single game, always doing extra stuff,” he recalled. “Always asking for more video, always working out, always stretching. Those are the things I really picked up on from Dylan and those are the things I want to pass on in Sarnia.”

He’s also hoping that having a couple familiar faces will help him settle in that much more easily, having played with Brayden Guy and Ethan Langevin on Team OMHA Black at the OHL Gold Cup back in 2017.

“I’m excited to see what he can bring to our table,” said Guy earlier this summer.

It’s been a big offseason for @StingHockey and @brayden_guy9 is looking forward to making a big impact next season with his teammates, both old and new 🐝

As he looks toward sporting the black and gold come December, he looks forward to playing higher minutes with a squad he’s confident will turn heads.

“There are a lot of new pieces coming in to help but if you look at their core group of guys, they’re already a solid team,” he said.

And while leaving former teammates behind is always tough – something he knows as all too well as he heads into what will be his third OHL stop – he also can’t wait for the new friendships that lay ahead.

“When I first went into Hamilton, I didn’t know anybody but I left there with 30 new friends. I’m hoping to do the same with Sarnia.”