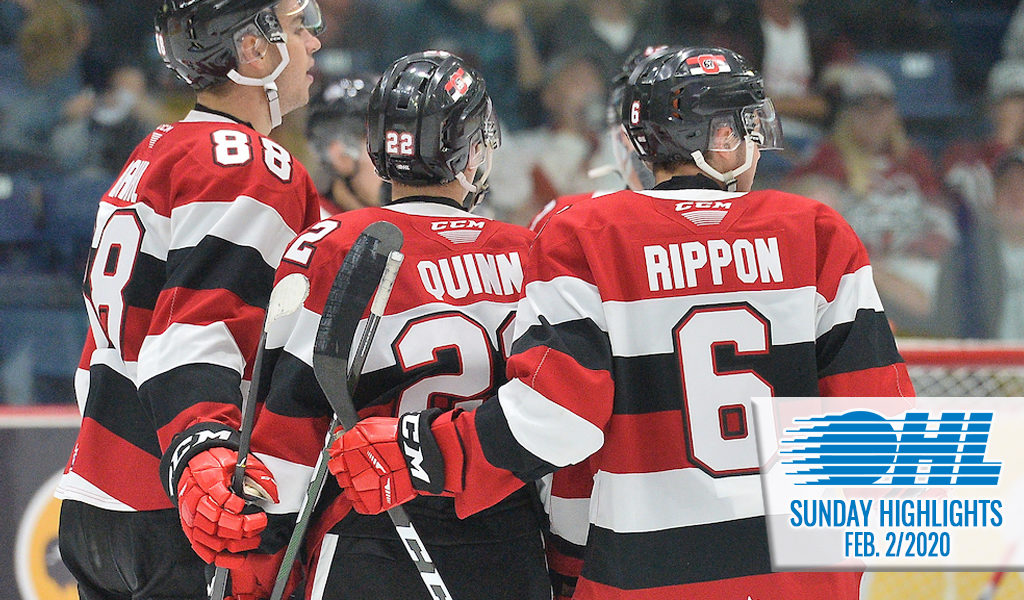 OTTAWA 5, SOO 2
The Ottawa 67’s officially punched their ticket to the postseason with Sunday’s 5-2 victory over the visiting Soo Greyhounds, their ninth consecutive appearance in the win column. OHL vet Austen Keating (23) scored minutes into the game for an early 1-0 lead, and Zack Trott (20) answered midway through the second period with the Soo’s tying goal. Jack Quinn reached goal number 40 to lift his team up 2-1, before teammate Noel Hoefenmayer (19) followed up with one of his own. Marco Rossi scored his 30th goal on the empty net to extend the Ottawa lead, as did Quinn for his league-leading 41st goal with Keating getting the assist for his 300th OHL point. Greyhounds sophomore Cullen McLean (4) nabbed one more with 14 seconds left for a final 5-2 score. The Greyhounds put 38 shots on Ottawa’s Cedrick Andree, while the 67’s posted 26 shots on Nick Malik. Ottawa sits atop the OHL standings with a 39-7-0-0 record and wins in 26 of their last 27 games. The Greyhounds’ three-game win streak comes to a halt as the team drops to 23-24-2-0 and ninth in the Western Conference.
GAME CENTRE

MISSISSAUGA 10, SUDBURY 3
St. Louis Blues prospect Keean Washkurak put up a career-high six points (2-4—6) while Calvin Martin (14, 15, 16) recorded a hat-trick and a helper as the Mississauga Steelheads continued their climb up the Central Division with a big 10-3 blowout of the division leading Sudbury Wolves. Martin found the back of the net first before Wolves overager David Levin (17) earned the tying goal. The Fish then came flying back with seven in a row off the sticks of Aidan Preuter (9), Florida Panthers pick Cole Schwindt (23), Washkurak (14, 15), Martin, rookie Ole Bjorgvik-Holm (2) and NHL Draft hopeful James Hardie (28), who has now scored in seven of his last eight games. Isaak Phillips (8) notched another for Sudbury before Martin struck with his second of the night. Wolves captain Macauley Carson (16) finished off the scoring for Sudbury, and rookie Michael Stubbs (2)  got the Fish to double digits with 13 seconds to go. The shots totaled 37-30 in favour of the Wolves, who now see their record drop to 25-23-1-0 with a second straight loss. The Fish are now at 23-23-2-1, just two points behind the top seeded Wolves.
GAME CENTRE

KINGSTON 6, NORTH BAY 3
The Kingston Frontenacs found themselves back in the win column Sunday afternoon as they doubled up on the host North Bay Battalion 6-3. Battalion rookie David Campbell’s (1) first OHL goal put his team on the scoreboard but the Fronts responded with markers from Zayde Wisdom (22) and Lucas Rowe (7). Captain Luke Moncada (27) and Nick Grima (3) reclaimed the North Bay lead, but the Fronts came back with four unanswered thanks to Martin Chromiak (8), Nick King (6), Vitali Pinchuk (6), and Shane Wright (28), who leads all CHL rookies in points with 46 (28-18—46) to his name. Kingston’s Ryan Dugas stopped 33 of the 36 shots he faced for the win as the Fronts were outshot 36-25. The Fronts sit at the bottom of the East Division with a 15-28-2-2 tally, while the Troops remain fifth in the Central Division at 11-35-2-0 with a fourth straight loss.
GAME CENTRE

OSHAWA 3, HAMILTON 2 – OT
Captain Kyle MacLean found the back of the net 2:26 into overtime to secure his Oshawa Generals the 3-2 win over the visiting division rival Hamilton Bulldogs. Early goals from Mitchell Brewer (1) and NHL Draft eligible Ty Tullio (23) gave the Gens an early 2-0 advantage until Payton Vescio (3) as well as Los Angeles Kings prospect and all-time leading Bulldogs goal scorer Arthur Kaliyev (35) answered to tie things up by the beginning of the second period. The remainder of the middle frame would remain scoreless, as would the final period, before MacLean (10) sealed victory off a patient pass from Montreal Canadiens prospect Allan McShane. The Gens outshot the Dogs 37-34 and improve to 25-27-4-2 on the year, hovering in the middle of the East Division. The Bulldogs fall to 20-22-5-1, 10 points below Oshawa at fourth place.
GAME CENTRE