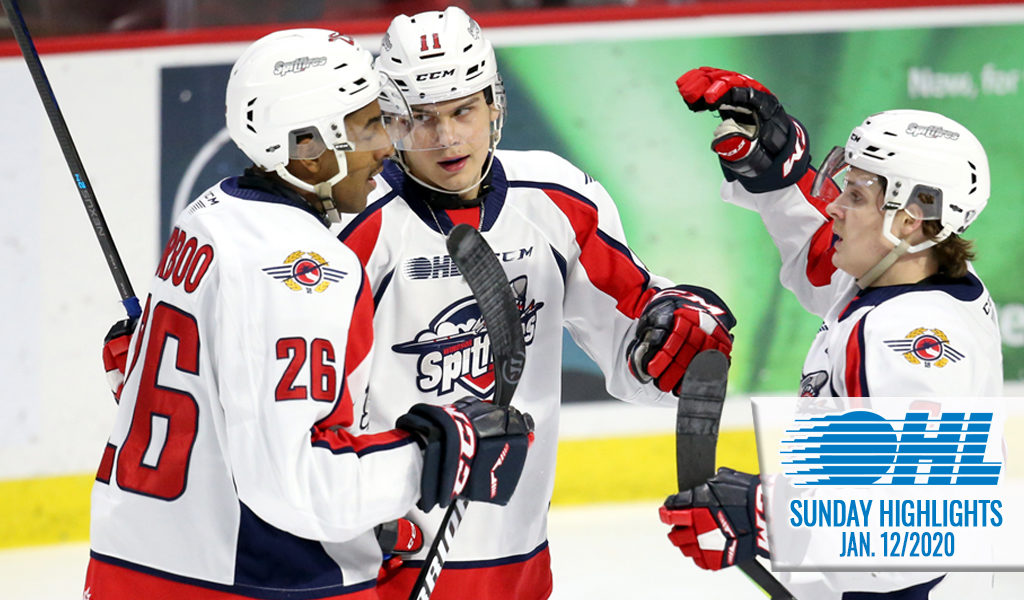 WINDSOR 5, KITCHENER 4
Nashville Predators pick Egor Afanasyev found the back of the net with 58 seconds left in overtime to lift his Windsor Spitfires past the Kitchener Rangers 5-4 and into the Western Conference’s top spot. Windsor rookie Wyatt Johnston (5) and sophomore Will Cuylle (15) opened the scoring before Kitchener’s Mike Petizian (10) responded less than a minute later to cut the lead in half. Columbus Blue Jacket prospect Tyler Angle (21) extended Windsor’s lead, until goals from Arber Xhekaj (3) Dallas Stars prospect Riley Damiani (17), and Jonathan Yantsis (30) pushed Kitchener up by one. Fellow Dallas Stars prospect Curtis Douglas (16) potted one to even things at 4-4, before Afanasyev’s 18th of the season came off an impressive pass from Angle to secure the win in the extra frame. Spits netminder Kari Piiroinen stopped 24 of 28 shots that came his way, while Los Angeles Kings prospect Jacob Ingham recorded 33 saves on the other end. This is the third of four meetings between both clubs, the first two of which ended in Kitchener’s favour. The Spits’ win pushes them one point above the Rangers and Saginaw Spirit for first in the Conference and boosts their record to 25-9-5-0. The Rangers fall to 24-11-4-2 but remain first in the Midwest Division with 54 points.
GAME CENTRE

OTTAWA 7, OWEN SOUND 4
NHL Draft eligible Jack Quinn completed his second hat-trick in just five games, guiding the Ottawa 67’s to a 7-4 win over the visiting Owen Sound Attack. Quinn (28) opened the scoring in the opening frame, and Joseph Garreffa (23) scored the lone second period goal to widen Ottawa’s lead to 2-0. Quinn (29) kicked off a nine-goal third period that saw action on both sides of the ice. Attack sophomore Nolan Seed got his team on the board with his first of the season before Quinn completed the hat-trick with his 30th on the year. Owen Sound defenceman Carter Robertson (7) notched his first of two on the afternoon before Cameron Tolnai (4) and Garreffa (24) put Ottawa ahead 6-2. Mark Woolley (1) and Robertson (8) got two more for the Attack, and Daylon Groulx (10), the newest member of the Barber Poles, rounded out the game with his squad’s seventh and final goal. Owen Sound outshot Ottawa 37-28, with Cedrick Andree registering 33 saves in net for the 67’s. Mack Guzda total 21 saves on the Attack’s end. Ottawa, whose lengthy win streak ended the day before in a shutout loss to the Peterborough Petes, has now claimed both wins on the season against Owen Sound and continue to sit atop the OHL standings with 62 points and a 31-7-0-0 tally. Owen Sound remains fifth in the Midwest Division and see their record drop to 18-16-3-3.
GAME CENTRE

LONDON 7, SOO 1
Washington Capitals first rounder Connor McMichael scored twice to help the London Knights skate past the Soo Greyhounds in a 7-1 contest. London sophomore Gerard Keane opened the scoring midway through the opening period with his first of the season and was followed up by McMichael’s 29th and 30th goals on the year. Chicago Blackhawks prospect Alec Regula (13) struck next to lift the London lead to 4-0. Third year Soo skater Joe Carroll (9) got the Greyhounds their only goal of the game towards the end of the second period, before London saw three more off the sticks of St. Louis Blues pick Liam Foudy (15), Keane (2), and NHL Draft prospect Luke Evangelista (16). The Knights outshot the Greyhounds 29-26 and finish their weekend with four points out of six under their belts. Their record climbs to 25-13-1-1 as they remain second in the Midwest. The Greyhounds fall to 20-19-2-0 and continue to hover at fourth in the West Division.
GAME CENTRE

ERIE 6, SARNIA 2
Two-goal performances from Brendan Hoffmann and Austen Swankler led the Erie Otters to a second straight win, this time past the Sarnia Sting in a 6-2 decision. Newly acquired forward Kyen Sopa (16) potted his second goal in his second game with the Otters before sophomore Sting skater Theo Hill (6) followed up to even the score. A pair from Hoffmann (7, 8), and one from Chad Yetman (22) in between, brought the Otters up 4-1. Fifth year OHL vet Ryan McGregor (16) struck next, and Swankler’s (10, 11) two capped off the Erie win. Sarnia remains in the West Division’s fifth place spot, falling to 16-22-4-0 with their ninth loss in their last 10 games. Erie’s win brings them up to 18-14-2-6 at fourth in the Midwest.
GAME CENTRE

OSHAWA 6, PETERBOROUGH 4
Nashville Predators pick Philip Tomasino and rookie Brett Harrison scored a pair each to help their Oshawa Generals to a second straight victory, this time in a 6-4 win over the East Division rival Peterborough Petes. Oshawa rookie David Jesus (2) netted his second goal of the season to get things started before newly acquired forward Akil Thomas (16), a Los Angeles prospect, earned his first goal as a member of the Petes. Harrison (13) and Tomasino (27) struck next, while Toronto Maple Leafs draftee Nick Robertson (27) nabbed a goal minutes later. Tomasino (28) and Harrison (14) found the back of the net again, as did Robertson (28) before fellow Leafs pick and leading Petes scorer Semyon Der-Arguchintsev (6) traded goals with Oshawa’s Ty Tullio (18) towards the end of the match. Sunday’s game is the fourth of six between both teams, the first three of which ended with Peterborough in front. Jordan Kooy saved 28 of 32 attempts in net for the Gens, and Hunter Jones totaled 22 saves on the night. The Petes’ record drops to 26-13-2-1 at second in the East Division, while the neighbouring Gens bump up to 21-13-3-2 in third place.
GAME CENTRE

MISSISSAUGA 3, SUDBURY 1
The Mississauga Steelheads moved into second place in the Central Division with a 3-1 win over the division leading Sudbury Wolves Sunday afternoon, the fourth of six meetups between both teams. A day after it was announced he had signed with the club, Rylan Bowers scored his first OHL goal in his Steelheads debut to open the game’s scoring midway through the first period. Following a scoreless middle frame, NHL Draft eligible James Hardie (19) got on the board in the third, and was followed up by an empty netter from Richard Whittaker (15). As the final seconds counted down on the clock, Sudbury’s Matej Pekar (17) spoiled the shutout with a late goal to end the game. The shots ended 35-31 in favour of Mississauga, whose record improves to 17-22-2-1 on the year behind the Wolves. Sudbury sees their record fall to 21-19-1-0 with a 43-point total. Both teams round out the weekend with four out of a possible six points.
GAME CENTRE