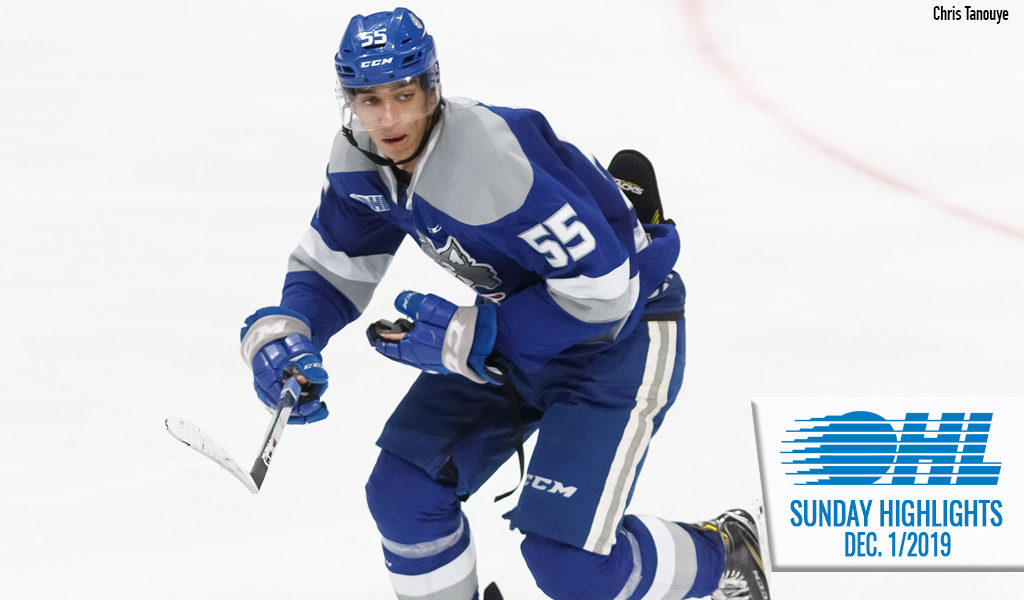 SUDBURY 5, MISSISSAUGA 4 – OT
Top 2020 NHL Draft prospect Quinton Byfield’s (18, 19, 20) first career OHL hat trick, which included the OT game winner, guided the Sudbury Wolves to a 5-4 victory over the Mississauga Steelheads in a Sunday afternoon Central Division clash. Byfield’s first on the night opened the scoring for the Wolves 7:42 into what would be a busy first period, as the Steelheads responded with three straight to jump ahead. Shane Bulitka (13) and Mississauga’s Aidan Prueter (3) traded late period goals to bring things to 4-2 after twenty minutes. Two more from Liam Ross (2) and Byfield would ultimately bring things to overtime, but Byfield’s third on the night just 35 seconds in got the job done for the Wolves early. Joe Ranger stopped 38 of the Wolves’ 43 shots, while Sudbury’s Christian Purboo stopped 12 of 16 shots before Mitchell Weeks stepped in for 17 saves. Byfield’s three goal-night bumps him up to the fourth place slot in OHL scoring, and his Wolves remain first in the Central Division with a 16-11-1-0 record. Mississauga continues to hover at fourth place, as they fall to 8-16-2-0.
GAME CENTRE

LONDON 6, SOO 5 – OT
After a back-and-forth sixty minutes, Columbus Blue Jackets prospect Liam Foudy (13) scored on the power play 35 seconds into overtime to hand the London Knights their seventh straight win. Fourth-year Knight Cole Tymkin (5) put his team on the board 4:12 in, but Cole MacKay (13) and Zack Trott (7) put the Greyhounds ahead to finish off the first. NHL Draft hopeful Antonio Stranges (8) and Luke Evangelista (9) put London back in the lead midway through the second period, before Robert Calisti (7) and Connor McMichael (25) traded goals to lift that lead to 4-3. Third period markers from Soo’s Jaromir Pytlik (11) and Jaden Peca (10) as well as London’s Josh Nelson (4) evened things up at five apiece, signalling the need for OT. Foudy got the job done off a rebound inspired by a Ryan Merkley point shot, lifting London to 17-5-1-1 at the top of the Western Conference. The Greyhounds’ second straight loss keeps them at the bottom of the West at 10-15-2-9. MacKay scored the Hounds’ teddy bear toss goal shorthanded 5:33 into the opening frame.
GAME CENTRE

KITCHENER 2, GUELPH 1
The Kitchener Rangers spoiled the Guelph Storm’s 13-game point streak with a 2-1 win on home ice. A late first period goal from Reid Valade (8) got things going for the Rangers and New Jersey Devils prospect Michael Vukojevic (2) scored an empty netter in the remaining minute of the game that would prove to be the game winner. Michael Bianconi (2) managed to get one for the Storm with five seconds left on the clock, spoiling Jacob Ingham’s shutout but in his first start at The Aud since November 1st. Bianconi’s goal would be too late to disrupt Kitchener’s lead as they earned their third straight win with head coach Mike McKenzie behind the bench. Guelph, who took their first regulation loss since October 20th, remain second in the Western Conference with 34 points and a 15-5-1-3 record. The Rangers’ 10th win on the season brings them up to 10-10-2-2 as they sit in fifth place in the Midwest Division, chasing the Owen Sound Attack who are ahead by just two points.
GAME CENTRE

FLINT 5, SARNIA 3
The Flint Firebirds soared to a 5-3 win over visiting Sarnia. The Sting jumped out to a 2-0 lead thanks to Sam Bitten (8) and Jacob Perreault (13, 14), but Flint responded with four of their own that included two from Florida Panthers prospect Vladislav Kolyachonok (7, 8) and singles from Connor Roberts (9) and Jake Durham (12). Down by two, Perreault was able to get one more past Anthony Popovich, but Flint’s Jack Phibbs (7) scored with just nine seconds left to widen his team’s lead to a 5-3 final. Sarnia rookie Benjamin Gaudreau made 34 saves on 38 shots, while Popovich totaled 39 saves. Flint now  sits at 16-10-0-0 while the Sting fall to 12-14-0-0 on the season.
GAME CENTRE

OTTAWA 6, NORTH BAY 1
The Ottawa 67’s capped off a perfect weekend and skated to their seventh consecutive win with a dominating 6-1 performance over the North Bay Battalion in their home barn. The Barber Poles came flying early with three consecutive goals from leading scorers Marco Rossi (15, 16) and Austen Keating (14) to start things off. North Bay’s only goal of the afternoon came from third-year forward Mitchell Russell (8) midway through the second, while Yanic Crete (6), Joseph Garreffa (14), and Alec Belanger (4) lifted Ottawa up by five, making the 67’s the OHL’s first 20-game winner. Their perfect weekend keeps them tied with the division rival Peterborough Petes at 40 points for first place, and North Bay’s 22nd loss of the season keeps them at the bottom of the league. Rossi sits second in the OHL with 33 assists, and fifth in overall scoring with a current 49-point total.
GAME CENTRE 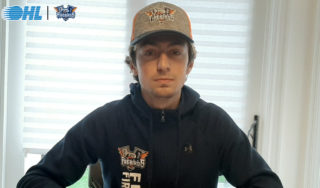