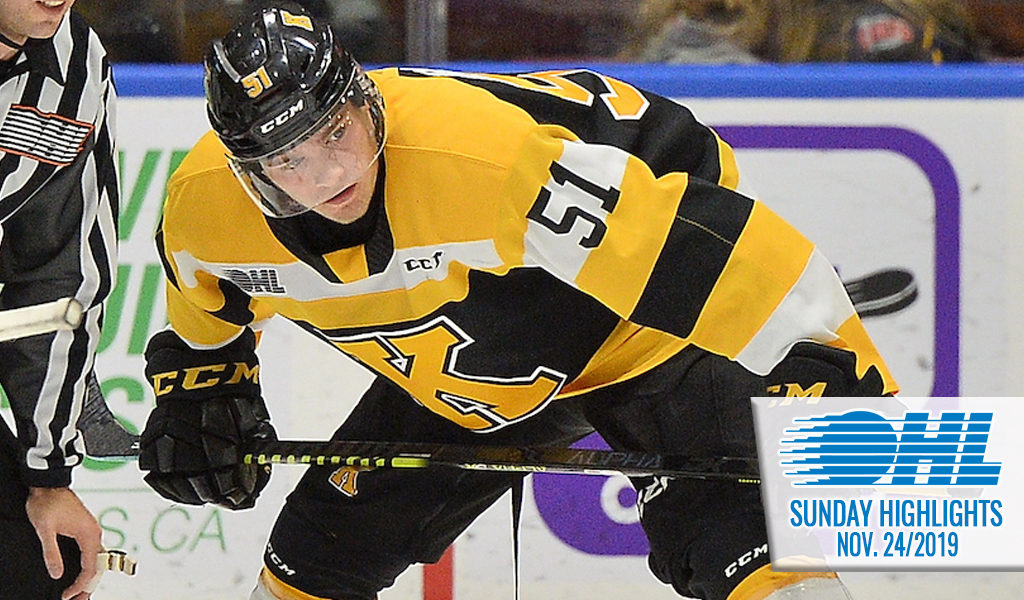 KINGSTON 3, MISSISSAUGA 2
A second consecutive two-goal performance from Shane Wright (9, 10) guided the Kingston Frontenacs to their fourth straight win Saturday afternoon in a 3-2 decision over the Mississauga Steelheads. Third-year forward Nicholas Canade (4) and draft eligible winger James Hardie (7) were the Steelheads’ only scorers, with Hardie scoring the Steelheads franchise’s first penalty shot goal since November 2010. Kingston defenceman Jake Murray (2) joined Wright in the goal-scoring department for Kingston. The Fronts have some catching up to do in order to keep up with the likes of the fourth-place Hamilton Bulldogs, who sit nine points above them, but nonetheless their four points on the weekend bump them to 5-14-2-2. The Steelheads finished the weekend winless, at 7-15-1-0.
GAME CENTRE

LONDON 4, ERIE 0
The London Knights skated to their fourth straight win Sunday afternoon as 20-year-old Dylan Myskiw locked down his first OHL shutout in a 4-0 win road win in Erie. After a scoreless first period, NHL Draft hopeful Antonio Stranges (8) opened the scoring with a burst of speed, scoring his fifth goal against the Otters this season.  Goals from veteran Billy Moskal (6), Ottawa Senators prospect Jonathan Gruden (9), and Columbus Blue Jackets pick Liam Foudy (11) followed suit to put the Knights up by four before the end of the second. A scoreless final 20 minutes sealed the deal for the Knights, whose four-point weekend now slides them into a first place tie in the Midwest Division. Both teams finished with an equal 26 shots. London will rest until Friday when the Windsor Spitfires come to town, while the 11-7-2-5 Otters are back in action Thursday night at home to the Kitchener Rangers.
GAME CENTRE

NORTH BAY 4, NIAGARA 3
Coming off a 4-0 loss on Friday night, the North Bay Battalion edged visiting Niagara 4-3, effectively ending the Dogs’ three-game win streak. The Central Division matchup saw seven different scorers get on the board, including OHL vet Nick Grima (1), who earned his first goal with the Troops since his acquisition in early October. North Bay scored shorthanded just 1:35 after puck drop, but goals from Niagara’s Philip Tomasino (14) and Andrew Bruder (5), his fourth goal in six games, put the Dogs ahead after the first 20. Grima, Brad Chenier (11), and Luke Moncada (11) tallied for North Bay in the second and third periods. A late goal from Jake Uberti (6) lessened North Bay’s lead to 4-3, but the IceDogs would fall just short as time expired. The Battalion earned a much-needed two points to improve to 5-19-0-0. Niagara falls to 9-12-3-1 and will rest before heading to Sarnia on Friday.
GAME CENTRE

OSHAWA 7, SUDBURY 0
Zachary Paputsakis earned his first career OHL shutout, stopping all 27 shots in the Oshawa Generals’ 7-0 home win over the Sudbury Wolves on Sportsnet. The Gens scored four of their seven markers in the first period and, after a quiet second period, came back with three more in the final 20 minutes. Their seven goals came from seven different scorers including Woodbridge, Ont. native Lleyton Moore (1), who scored his first of the season and first as a General. Brett Neumann (18), Ryan Gagnier (2), Brett Harrison (5), Danil Antropov (6), Daniel Walker (2) and Kyle MacLean (3) also lit the lamp for Oshawa as the Generals improved to 16-6-0-1, one point back of Peterborough and Ottawa in the East Division. Sudbury will look to recover from their winless weekend and fourth straight loss when they host the Barrie Colts back in their own barn on Friday.  Oshawa will host the Mississauga Steelheads back at home on Thursday before hitting the road to Ottawa.
GAME CENTRE

WINDSOR 4, OWEN SOUND 3 OT
Draft eligible forward Jean-Luc Foudy (9) banked in the overtime winner from below the goal line to give the Windsor Spitfires a 4-3 edge over visiting Owen Sound. Kaleb Pearson (6) found the back of the net just over six minutes into the first, but a powerplay goal from Vegas Golden Knights prospect Connor Corcoran (7) evened the score. OHL veteran Brady Lyle (6) put the Spits back in front with a one-timer, but Tyler Angle (14) gave the Attack their second powerplay goal of the night. Matthew Philip (12) and Cole Purboo (11) traded second period goals, and a scoreless third period would send things to OT, where Foudy would win it for the Spits. Windsor collected a big four points on the weekend and have picked up at least a point in each of their last 13 games. The big weekend has the Spits flying high atop the Western Conference with a 15-3-3-0 record and 33 points. The Attack’s overtime loss sends them to 10-9-3-1 as they remain fourth in the Midwest Division behind the Erie Otters. Owen Sound has now lost six in a row.
GAME CENTRE

SOO 5, SARNIA 2
Both the Greyhounds and the Sting were coming off losses heading into Sunday’s matchup, but Sault Ste. Marie was able to get it done, ending their three-game roadie with two points in Sarnia in a 5-2 win. Tye Kartye’s (11) eleventh of the year opened the scoring for the Soo on their first shot of the game, but Jacob Perrault’s (10) response came minutes later, tying things at one. Goals from Joe Carroll (3) and Tanner Dickinson (3) put the Greyhounds back in the lead. Ryan McGregor (6) got one more for the Sting, cutting the Soo lead to 3-2, but third-year Greyhound Cole MacKay (11, 12) scored what would be the insurance goal with 5:48 left in the second period. MacKay then sealed the deal with an empty netter as the final seconds on the clock counted down. Ethan Langevin faced 38 shots, while Greyhounds netminder Bailey Brkin stopped 25 of 27. The Sting fall to 11-12-0-0, with the Soo not far behind at 10-14-1-0, rounding out the bottom of the West Division.
GAME CENTRE