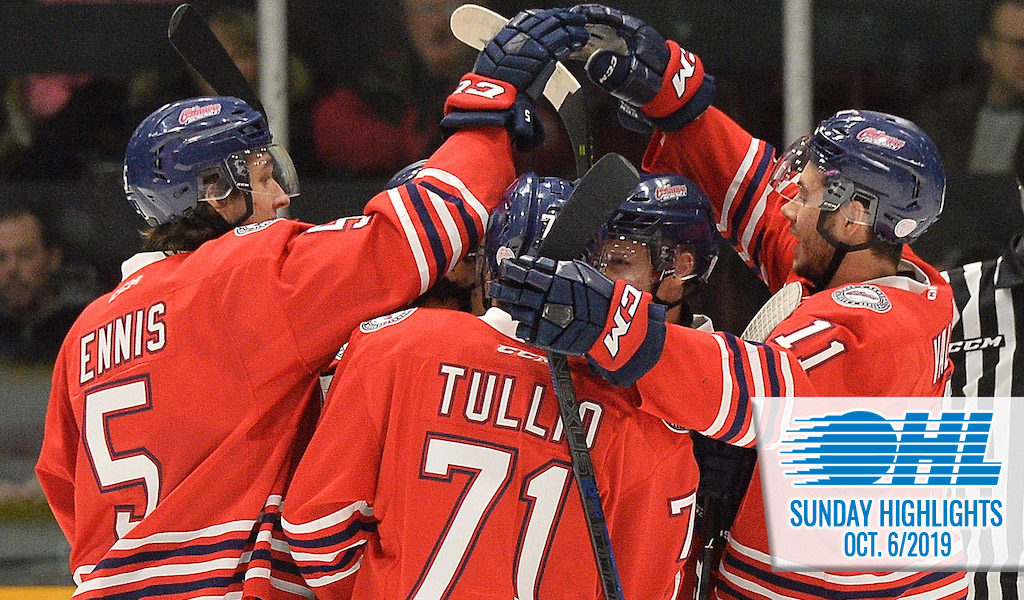 OSHAWA 4, SAGINAW 3
Florida Panthers prospect Serron Noel (2, 3) scored a pair of third period goals as the Oshawa Generals won a fast-paced showdown over the reining West Division champion Saginaw Spirit for their seventh straight win. The 4-3 home ice victory pushes the Generals to the top of the CHL standings with a 7-0 record as captain Kyle MacLean returned to the lineup for his season debut. The Spirit carried a 2-1 lead into the latter half of action before Oshawa scored for three straight off the sticks of Nico Gross (4) and Noel. Cole Coskey (5, 6) brought the Spirit within a goal with 20 seconds remaining but it was too little, too late as the Generals won before a crowd of 5,160. Brett Neumann (3) also scored for Oshawa while Andrew MacLean made 35 saves for his sixth victory. Coskey scored twice for Oshawa while captain Damien Giroux (7) also lit the lamp. Saginaw outshot Oshawa 38-28, going 2-for-4 on the power play. The Spirit own a 4-3-1-0 record tied atop the West Division.
GAME CENTRE

MISSISSAUGA 4, WINDSOR 3
James Hardie (3, 4) banged home a rebound for the game winner 8:20 into the third period as the Mississauga Steelheads claimed their second straight win on home ice. Hardie scored twice on the afternoon as the Trout defeated the Windsor Spitfires 4-3, also getting goals from Thomas Harley (3) and Cole Schwindt (2). Kai Edmonds made 22 saves in goal, surrendering Windsor goals by Tyler Angle (5), Kyle McDonald (3) and Egor Afanasyev (2) as the Steelheads improved to 2-4-0-0. The Spitfires fall to 4-2-1-0.
GAME CENTRE

KITCHENER 4, OTTAWA 3
The Kitchener Rangers came back from down 3-1 as rookie Francesco Pinelli (6) began the march back to victory with a beautiful goal. Jonathan Yantsis (5) and Donovan Sebrango (1) scored second period goals to put Kitchener in the lead for good as they defeated the visiting Ottawa 67’s 4-3 before a Sunday crowd of 6,296. Mike Petizian (1) also scored for the Rangers and LA Kings prospect Jacob Ingham made 35 saves, helping the Rangers triumph despite being outshot 38-23. Austen Keating (2), Jack Quinn (4) and Mitchell Hoelscher (4) provided the Ottawa offence was Quinn finished with a goal and two assists. The Rangers went 2-0 on the weekend, improving to 3-1-1-1. Ottawa went 1-2 on their weekend road trip, falling to 4-3-0-0 in the East Division standings.
GAME CENTRE

HAMILTON 3, KINGSTON 2 – SO
Tag Bertuzzi (2) tied the game with 4:11 remaining before netting the shootout winner as the Hamilton Bulldogs snapped a five-game slide, defeating the visiting Kingston Frontenacs 3-2. Jan Jenik (3) also scored while Arthur Kaliyev picked up two assists on the afternoon. Zayde Wisdom (2, 3) provided both Kingston goals as the Frontenacs earned a point in their sixth straight loss. Kingston’s Brendan Bonello made 35 saves, helping the Fronts return home with one point as they were outshot 37-29. Hamilton’s Zach Roy made 27 saves before turning away all three shootout opponents he faced. The Bulldogs improve to 2-5-0-0.
GAME CENTRE

PETERBOROUGH 4, SOO 3
Toronto Maple Leafs prospect Nick Robertson (8) scored the game winner on a second period penalty shot as the Peterborough Petes took a 4-3 win in Sault Ste. Marie. Dustin Hutton (2), Cameron Butler (2) and Max Grondin (2) also provided offence while Hunter Jones picked up the win with 25 saves. After starting 4-0, the Hounds dropped both of their home games this weekend as Joe Carroll (1), Jaden Peca (3) and Rory Kerins (4) scored goals on Sunday. Both teams own a record of 4-2-0-0.
GAME CENTRE

GUELPH 5, SARNIA 3
Pavel Gogolev (2) and Keegan Stevenson (3) scored third period goals to push the Guelph Storm past the Sarnia Sting 5-3 on the road. Owen Bennett earned his first OHL win with a 25-save showing while other Storm goals came from Eric Uba (2), Danny Zhilkin (2) and Daniil Chayka (3). Stevenson finished the afternoon with a goal and two assists to go with a plus-4 rating. Sam Bitten (3), Ty Voit (1) and Jacob Perreault (3) scored goals as the Sting dropped their fifth straight decision. Guelph improves to 2-1-1-1.
GAME CENTRE