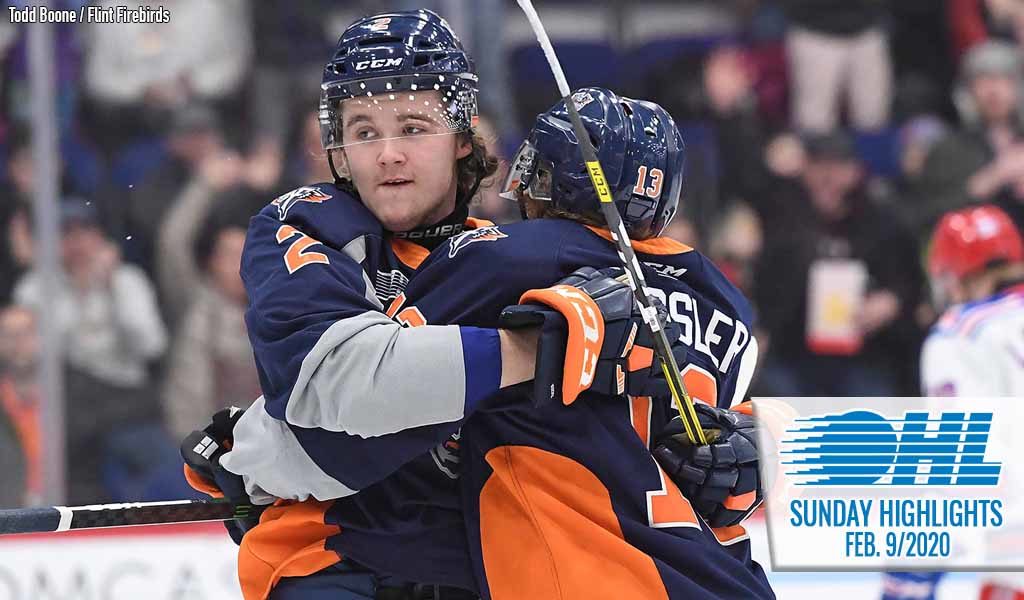 FLINT 5, OSHAWA 3
The Flint Firebirds’ record-setting win streak continued as a pair of goals from St. Louis Blues prospect Tyler Tucker (12, 13) and Evgeniy Oksentyuk (24, 25) helped them to a 10th consecutive victory in a 5-3 defeat of the Oshawa Generals. Oksentyuk and Florida Panthers prospect Vladislav Kolyachonok (11) gave the Birds a 2-0 advantage through the opening 20 minutes before Tucker’s back-to-back markers widened that cushion to 4-0. Overager Brett Neumann got his Gens on the board with his 36th of the season, and Nashville Predators pick Philip Tomasino (35, 36) notched two in a row to cut Flint’s lead to 4-3, until Oksentyuk (35) hit the empty net to push the lead to a final 5-3. Tucker earned first star in the win with two goals and an assist as the Firebirds got a 23-save performance from Anthony Popovich. Flint continues to maintain second in the West Division and see their record improve to 32-17-1-1, while Oshawa remains in the middle of the East Division and fall to 26-18-4-2 on the year.
GAME CENTRE

MISSISSAUGA 5, KINGSTON 4
James Hardie’s game winner with 54 seconds remaining led the Mississauga Steelheads to a 5-4 victory in Kingston. Hardie opened the scoring with his 30th goal of the season for a 1-0 lead the Fish would carry into the middle frame. From there, Michael Stubbs (3) and two in a row from Aidan Prueter (10, 11) gave the Fish the 4-0 advantage. Rookie Shane Wright (31) and fourth year OHLer Dawson Baker (17) kickstarted the Kingston comeback, cutting Mississauga’s lead in half to round out the second period, and Martin Chromiak (9) brought them within one at the beginning of the final frame. Zayde Wisdom (24) tied the game with 1:17 left in the. third, but Hardie (31) found the back of the net with just 54 seconds left on the clock to seal the victory for the Steelheads. Kai Edmonds made 32 saves for the win while Christian Propp gave way to Ryan Dugas in the Kingston crease. The Fronts drop to 17-29-2-2 and remain fifth in the East Division. The Steelheads bump back up to .500 with a record of 24-24-3-1in the Central Division’s second place slot.
GAME CENTRE

KITCHENER 7, SARNIA 0
Lucas Pfeil stopped 28 shots while Florida Panthers prospect Greg Meireles (25, 26) and rookie Declan McDonnell (16, 17) found the back of the net twice as the Kitchener Rangers blanked the Sarnia Sting 7-0 on the road. Overager Jonathan Yantsis (34) and Arizona Coyotes prospect Axel Bergkvist (8) struck first, followed up by McDonnell and Meireles in the second period. Meireles opened the final frame with his second of the game, capping off a three-point performance, before Liam Hawel (14) and McDonnell, who now has five goals in his last two games, wrapped up the scoring. The Rangers’ third straight win keeps them atop the Western Conference at 32-12-5-2 while the Sting continue to sit fifth in the West Division with a 17-29-5-1 record.
GAME CENTRE

OTTAWA 9, NORTH BAY 1
A six-point performance from Jack Quinn (1-5—6) helped the Ottawa 67’s bounce back to their winning ways with a 9-1 blowout of the visiting North Bay Battalion. The first period saw goals from Ottawa’s Austen Keating (25), Alec Belanger (10), Quinn (44), Kevin Bahl (8) and Joseph Garreffa (27). The Barber Poles extended their lead in the middle frame on goals from rookie Teddy Sawyer (2), Noel Hoefenmayer (22), Keating (26), and Mitchell Hoelscher (28) for a 9-0 lead heading into the final 20 minutes. Brandon Coe (18) would spoil the Ottawa shutout 58 seconds in, closing out the scoring with his 50th OHL goal. Will Cranley earned his 12th straight win between the Ottawa pipes, stopping 16 of the 17 shots he faced as Ottawa took the shooting column 40-17. Keating’s two goals were part of a four-point showing that included his 200th career assist. The 67’s improve to 41-8-0-0 on the year atop the OHL standings, while the Battalion fall to 11-38-2-0 at fifth in the Central Division with a seventh straight loss. North Bay rookie Ty Hollett made his OHL debut.
GAME CENTRE

SUDBURY 7, NIAGARA 3
Fifth-year OHL veteran David Levin (22, 23, 24) completed his first hat-trick of the season, helping his Sudbury Wolves to a 7-3 victory over the visiting Niagara IceDogs. Owen Gilhula (10) and Macauley Carson (17) hopped on the board first before Niagara rookie Anthony Agostinelli (4) scored his first of two on the night. Levin and Owen Robinson (12) both scored within the opening minute of the second period before Agostinelli (5) found the back of the net again to bring the score to 4-2. Carson (18) earned his second of the night before Levin netted two in a row to finish off the hat-trick. Jake Uberti (13) earned one more for the IceDogs a minute and a half into the third to round out the scoring. The IceDogs’ losing skid hits its ninth game as they fall to 17-30-4-1 and remain eighth in the Eastern Conference, just one point ahead of the ninth place Kingston Frontenacs. The Wolves remain at the top of the Central Division and improve to 27-24-1-0.
GAME CENTRE