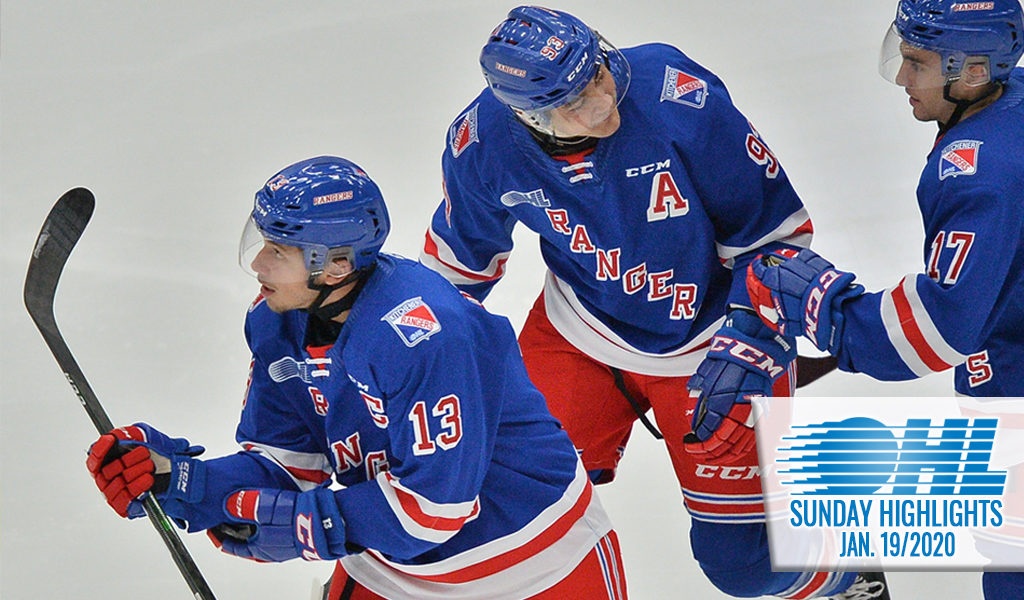 KITCHENER 5, GUELPH 4
Los Angeles Kings draft pick Jacob Ingham put up 42 saves between the pipes and Isaac Langdon scored twice as the Kitchener Rangers hopped to first place in the Western Conference after crawling back from a 3-0 deficit to edge the Guelph Storm 5-4. The Storm jumped to an early 3-0 lead thanks to Andrei Bakanov (8), Eric Uba (16), and Montreal Canadiens prospect Cam Hillis (16). The second period saw Mike Petizian (12) and Isaac Langdon (4) pull Kitchener within one before Uba’s (17) second of the game widened Guelph’s lead. The Rangers then responded with three in a row from Arber Xhekaj (4), Langdon (5), and Dallas Stars pick Riley Damiani (20) to claim the lead in the game’s final minutes. Sunday’s game was the second of a back-to-back between the two clubs, the first of which the Rangers won by a score of 6-3. Kitchener now owns an 8-0-2-0 record in their last 10 games and haven’t lost in regulation since Dec. 20. They boast an overall record of 27-11-4-2 and 60 points atop the Conference, while Guelph sinks to 22-15-1-4 at third in the Midwest with their seventh straight loss.
GAME CENTRE

FLINT 8, KINGSTON 5
A five-point afternoon from Dallas Stars prospect Ty Dellandrea (2-3-5) sent his Flint Firebirds soaring past the Kingston Frontenacs in an 8-5 comeback win. First period goals from Riley McCourt (12) and Jake Durham (17) gave Flint the early lead before the Fronts responded with four straight from Shane Wright (21), Martin Chromiak (4), Francesco Arcuri (5), and Kallaway Mercer (2). Dellandrea’s (19, 20) pair was followed up by two from Ethan Keppen (14, 15) and one from St. Louis Blues pick Tyler Tucker (9) in between. Jakob Brahaney (3) netted Kingston’s fifth and final goal of the game, and Riley Piercey (12) capped off the Flint win with less than five minutes to go. Christian Propp faced 46 shots and totaled 38 saves, while Anthony Popovich earned the win in relief, turning aside seven of eight shots. Flint improves to 23-17-1-1 for third in the West Division, while Kingston’s seventh loss in 10 games drops them to 12-24-2-2 as they remain fifth in the East Division.
GAME CENTRE

PETERBOROUGH 9, NIAGARA 2
The Petes put 58 shots on the Niagara IceDogs and saw two-goal games from Winnipeg Jets prospect Declan Chisholm, Toronto Maple Leafs pick Nick Robertson and San Jose Sharks propsect Zach Gallant as they charged to a 9-2 victory. Overager Oliver Castleman (18) put the Dogs up first, but four straight off the sticks of Chisholm (8), rookie Mason McTavish (26), Robertson (30), and Gallant (22) gave the Petes the upper hand. Rookie Cameron Snow (5) was able to nab one more for the Dogs, but the Petes came flying back with goals from John Parker-Jones (6), Gallant (23), Chisholm (9), Jack York (3), and Robertson (31). Chisholm and Gallant both finished the game with four-point performances. The Petes earn their 28th win of the season and remain second in the East Division with 59 points, while the IceDogs drop their seventh of their last 10, hovering in the middle of the Central Division at 16-21-4-1.
GAME CENTRE

LONDON 6, ERIE 2
Connor McMichael’s fifth hat-trick of the season and second in just four games helped the London Knights to their third consecutive win in a 5-2 contest with the Erie Otters. Chad Yetman (25) struck first for the Otters and was followed up by two in a row from McMichael (31, 32) as well as one from Chicago Blackhawks prospect Alec Regula (14). Brendan Sellan (5) netted one more for the Otters before McMichael, a Washington Capitals first rounder, completed the hat-trick with his 33rd goal of the year. NHL Draft prospect Luke Evangelista (17) found the empty net to widen the lead, and rookie Max McCue capped things off with his first OHL goal. The shots ended 36-31 in favour of the Knights, with Erie’s Daniel Murphy totaling 30 saves and rookie netminder Brett Brochu finishing up with 29 saves. London sits second in the Midwest at 27-13-1-1, while Erie’s second straight loss drops them 19-16-2-6 and fifth in the same division.
GAME CENTRE

WINDSOR 5, SAGINAW 3
The battle for the top of the West Division ended in favour of the Windsor Spitfires, whose five different scorers helped them to a third straight victory in a 5-3 decision over the Saginaw Spirit. Spirit rookie Davis ‘T-Bone’ Codd (5) found the back of the net first before the Spits notched four in a row from Wyatt Johnston (6), Nashville Predators pick Egor Afanasyev (19), Kyle McDonald (12), and Pasquale Zito (2). The Spirit cut Windsor’s lead with goals from Carolina Hurricanes prospect Ryan Suzuki (9) and Mason Millman (12), but Curtis Douglas (18) earned one more for the Spits to cap off the 5-3 win. The shots totaled 32-28 in favour of Windsor in the sixth of eight matchups between both teams this season. Windsor sees their record improve to 27-9-5-0, while the Spirit see a four-game winning streak snapped and drop to 27-13-2-2, just one point below Windsor in the division.
GAME CENTRE

OTTAWA 5, OSHAWA 3
New Jersey Devils draftee Mitchel Hoelscher put up a pair of goals in Ottawa’s 5-3 win over the East Division rival Oshawa Generals in their fifth of eight meetups this season. Adam Varga (5) and Alec Belanger (7) earned Ottawa a first period 2-0 advantage before NHL Draft eligible Ty Tullio (19) cut the lead in half. Hoelscher’s (25) first on the night extended that lead once again, but Oshawa tied it up off the sticks of Montreal Canadiens pick Allan McShane (18) and Jacob Winterton (5). Highly touted NHL Draft hopeful Jack Quinn’s league-leading 35th goal gave the 67’s the edge before Hoelscher (26) found the empty net to cap off a final two goal lead. The shots ended 28-21 in favour of the Barber Poles, who round out a perfect three-in-three weekend with their fourth straight victory. Their record bumps up to 34-7-0-0 as they continue to fly atop the OHL standings while the Gens fall to 21-15-3-2 at third in the East Division with a second straight loss.
GAME CENTRE