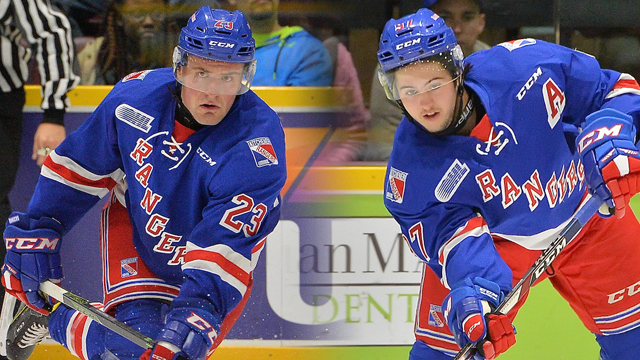 KITCHENER 3 MISSISSAUGA 2 OT
The Kitchener Rangers dug out of a 2-0 hole, falling behind in the opening three minutes of the game before charging back for a 3-2 overtime win. Toronto Maple Leafs prospect Jeremy Bracco (8) took a feed from Greg Meireles to go in on a breakaway and seal the victory as the Rangers improve to 8-3-0-1. Florida Panthers prospect Adam Mascherin’s  (6, 7) second of the game came with 1:30 remaining to force overtime. Draft eligible winger Owen Tippett (11, 12) provided both goals for Mississauga in the loss.
GAME CENTRE

OSHAWA 5 GUELPH 4 OT
Florida Panthers prospect Riley Stillman set up Kenny Huether (3) in the slot to give the Oshawa Generals a 5-4 overtime win over the visiting Guelph Storm. The Gens rallied back from a 3-0 deficit before Guelph’s James McEwan tied the game in the final of the minute of the third period to force overtime. The Storm had first period goals from Isaac Ratcliffe (6), Nic Sicoly (1) and Givani Smith (5). The Generals charged back with four straight markers off the sticks of Anthony Cirelli (9), Domenic Commisso (7), Jack Studnicka (4) and Danil Antropov (1). Guelph rookie Ryan Merkley set up McEwan at the side of the net to earn the Storm a point before they fell in OT. Oshawa goaltender Jeremy Brodeur made 19 saves to earn the win in relief. The Generals have won five of their last six games, improving to 7-5-0-0 for second in the East Division.
GAME CENTRE

OTTAWA 6 SUDBURY 2
The Ottawa 67’s racked up 56 shots, scoring six times in a 6-2 win in Sudbury. Noel Hoefenmayer (3), Austen Keating (5) and Artur Tyanulin (5) each had a goal and an assist while Leo Lazarev made 33 saves. The win sees the 67’s snap a four game skid as Chase Campbell (5), Ben Fanjoy (4) and Jared Steege (2) also scored. Macauley Carson (6) and Kyle Capobianco (4) responded with goals for Sudbury while goaltender Zack Bowman made 50 saves.
GAME CENTRE

KINGSTON 5 FLINT 3
Carolina Hurricanes prospect Jeremy Helvig made 35 saves while youngsters Nathan Dunkley (3) and Jason Robertson (4) each had a goal and an assist as the Kingston Frontenacs took a 5-3 win in Flint. The Fronts were outshot 38-23, but had other goals from captain Stephen Desrocher (2), Sergey Popov (1) and Warren Foegele (1) to end their road trip on a high note. Ryan Moore (11), Mathieu Henderson (3) and Ty Dellandrea (5) all scored for Flint.
GAME CENTRE

LONDON 7 HAMILTON 2
Sam Miletic (5, 6) and Janne Kuokkanen (4, 5) each scored twice as the London Knights took a 7-2 win in Hamilton. Victor Mete (5), Cole Tymkin (1) and Cliff Pu (6) also scored in London’s third straight victory as the Knights went 3-for-4 on the power play. The Bulldogs, who were in pink on Pink in the Rink day in Hamilton, were outshot 28-21, getting goals from Justin Lemcke (2) and Brandon Saigeon (2). The Bulldogs have dropped three straight decisions but still sit atop the East Division with a 7-4-1-0 record.
GAME CENTRE