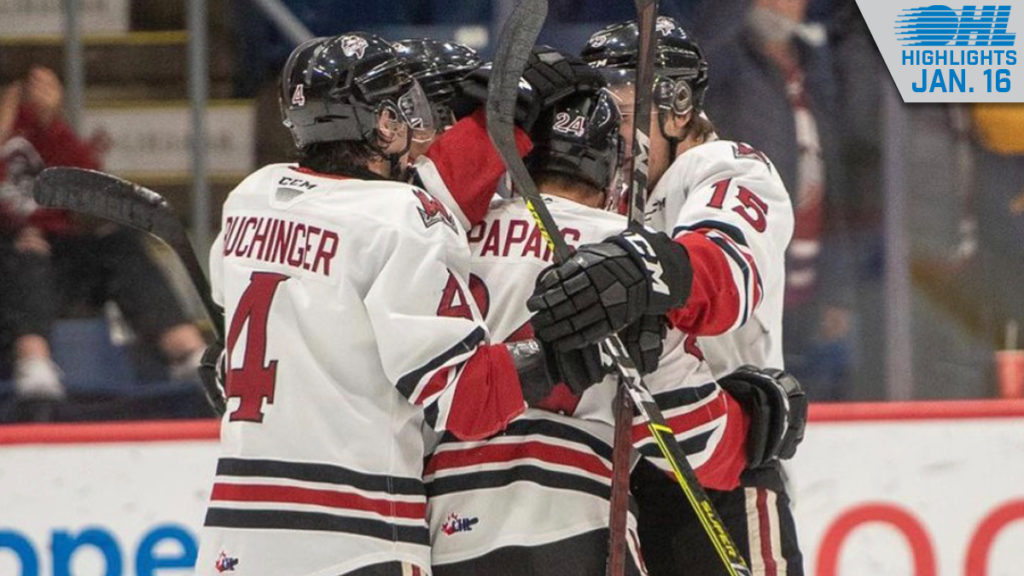 GUELPH 7, KITCHENER 4
– The Storm prevailed in their long-awaited return as Valentin Zhugin had a goal and three assists in a road win over rival Kitchener.
– Jake Karabela, Braeden Bowman and Luka Profaca all had a goal and an assist while Cameron Supryka recorded two helpers.
– Ryan McGuire scored his first career OHL goal for the Storm.
– Andrew LeBlanc scored his first career OHL goal and added an assist for Kitchener.
– The Storm outshot Kitchener 41-18, staying out of the penalty box the entire game in their first action since Dec. 18th.
– Brayden Guy and Ashton Reesor made their Storm debuts.
– Guelph earns a fourth straight win, improving to 18-8-1-1, one point back of first place London in the Midwest Division.
– The Rangers drop their fourth straight decision, sitting eighth in the Western Conference with a 13-15-1-1 record.
– The two clubs have split their season series, with Guelph having won the last three encounters.
– Linesman Kevin Hastings skated in his 1000th career OHL regular season game, becoming just the third official in League history to do so. Hastings is in his 22nd season as an OHL official, having worked his first game back on Sept. 26, 1999.
GAME CENTRE & HIGHLIGHTS

The Boys are back in business.

Our next game is on Tuesday against the Flint Firebirds. #StormCity | #IamtheStorm pic.twitter.com/7NsFNujEVY

HAMILTON 8, KINGSTON 1
– Battle for top spot in the East Division went hard in the direction of host Hamilton as Mason McTavish and Avery Hayes both had two goals and an assist in an 8-1 win.
– George Diaco scored a lacrosse-style goal while Ryan Humphrey had three assists and Logan Morrison picked up a goal and a helper.
– Maddox Callens scored Kingston’s lone goal late in the first period.
– Hamilton outshot Kingston 39-14, winning for the first time in three tries against the Frontenacs this season.
– The Bulldogs surge three points ahead of Kingston atop the East Division, improving to 18-9-2-2.
– Kingston drops a third straight decision, falling to 17-8-3-0.
GAME CENTRE & HIGHLIGHTS

George Diaco’s Michigan goal leads the Bulldogs to an 8-1 victory on Sunday afternoon!#DawgMentality#OHL#HamOnthttps://t.co/Yd7vprwmIipic.twitter.com/w9Szm1KWOk

SARNIA 4, LONDON 2
– San Jose Sharks prospect Ben Gaudreau turned aside a season-high 49 shots, backstopping the Sting to their fourth straight win against the rival Knights.
– Nolan Dann had a goal and an assist for Sarnia while Nolan Burke scored his club-leading 19th goal of the season.
– Rookie defenceman Alexis Daviault scored the deciding goal 56 seconds into the second period.
– Sean McGurn and Logan Mailloux provided London goals in the loss.
– Sarnia won despite being outshot 51-13 in a penalty-filled affair. It marks Sarnia’s third win this season when being held to less than 15 shots.
– Sarnia improves to 13-13-3-0, sitting tied with Owen Sound for sixth place in the Western Conference.
– The Knights fall to 19-9-1-0, one point up on Guelph for first in the Midwest Division.
GAME CENTRE & HIGHLIGHTS

BARRIE 8, NORTH BAY 2
– Anthony Tabak matched a career-high with four points (2-2–4) while LA Kings prospect Brandt Clarke had a similar total with a goal and three helpers as the Colts scored eight in North Bay.
– Clarke’s 32 points (6-26–32) over 25 games push him into the scoring lead among OHL defenders.
– Tampa Bay Lightning prospect Declan McDonnell picked up three assists in the win while Ethan Cardwell had a goal and two helpers for the Colts, who outshot North Bay 32-25.
– Barrie’s Ben Pickell opened the scoring with his first career OHL goal.
– Matvey Petrov and Brandon Coe each scored their 22nd goal of the season for the Battalion.
– Mack Guzda stopped 23 of 25 for the win.
– The Colts have won eight of their last 10, improving to 16-8-3-0 for fifth in the Eastern Conference.
– North Bay has lost seven of their last 10, falling to 18-12-2-2 for third place in the Eastern Conference.
GAME CENTRE & HIGHLIGHTS

The @LAKings first-round pick finds the back of the net 🔥

Brandt Clarke (@brandtclarke55) adds to his productive afternoon, as the @OHLBarrieColts are on the verge of earning a well-deserved two points on the road in North Bay 📽️ pic.twitter.com/LhE5tWwp7D

SAULT STE. MARIE 6, OWEN SOUND 1
– The Greyhounds climbed out to a 3-0 first period lead and never looked back, becoming the second OHL team to reach the 20-win mark.
– Calgary Flames prospect Rory Kerins posted his sixth 4+ point effort of the season with two goals and two assists.
– Tanner Dickinson and Cole MacKay both picked up a goal and an assist while Tye Kartye scored his League-leading 27th goal of the season, coming shorthanded.
– Owen Sound’s Nicholas Porco ended Samuel Ivanov’s shutout bid with 5:08 remaining in the third period.
– Sault Ste. Marie outshot Owen Sound 36-24, with their top-ranked power play unit going 2-for-3.
– Ivanov stopped 23 of 24 for the win while Owen Sound rookie Corbin Votary made 26 saves in two periods of relief work.
– The Greyhounds lead the Western Conference with a 20-12-2-0 record.
– Owen Sound falls to 13-13-1-2, being outscored 11-3 in consecutive road losses in the Soo this weekend.
GAME CENTRE & HIGHLIGHTS

WINDSOR 6, FLINT 3
– Down 3-2 midway through the second period, Windsor scored four unanswered goals, with Detroit Red Wings prospect Pasquale Zito providing two of them.
– Matthew Maggio also scored twice for Windsor while Wyatt Johnston and Will Cuylle each logged three assists.
– Johnston’s has recorded at least three assists in four straight games, and maintains the League scoring lead with 60 points (20-40–60) in 31 games.
– New York Rangers prospect Brennan Othmann scored twice and added an assist for Flint.
– Windsor outshot Flint 35-25, going 2-for-5 on the power play.
– Xavier Medina made 22 saves for the win opposite Flint’s Luke Cavallin, who made 29 saves.
– The Spitfires return to the win column, improving to 17-10-2-2, tying Guelph for third in the Western Conference.
– Flint falls to 17-13-0-2, trailing Windsor by two points in the standings.
GAME CENTRE & HIGHLIGHTS

MISSISSAUGA 3, OSHAWA 1
– 2022 NHL Draft prospect Luca Del Bel Belluz earned first star honours with a goal and an assist as the Steelheads stretched their current point streak to nine games.
– Roman Basran carried a shutout into the final two minutes of play before Stuart Rolofs scored for Oshawa. Basran stopped 19 of 20 for the win.
– Zachary Paputsakis turned aside 34 of 36 to earn second star recognition for the Generals.
– The Steelheads lead the OHL standings with a 23-7-1-2 record. They haven’t lost in regulation since Dec. 12th.
– Oshawa loses at home for the first time since Nov. 28th, falling to 15-12-1-2 to sit sixth in the Eastern Conference.
GAME CENTRE & HIGHLIGHTS

The @OHLSteelheads forward tallies his 18th goal and 45th point of the season, as he continues to make his case as a legitimate #NHLDraft prospect 📽️ pic.twitter.com/uvkNj29OTA