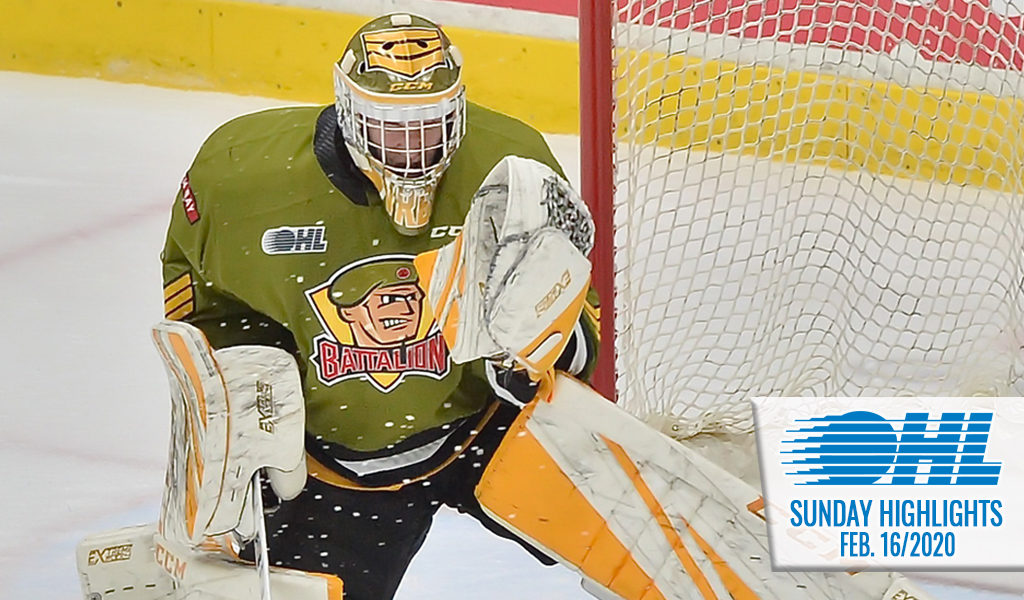 NORTH BAY 3, MISSISSAUGA 2 OT
Simon Rose (3) found the back of the net with just 28 seconds left in overtime and rookie goaltender Joe Vrbetic shut down 38 of the 40 shots he faced to help defeat the visiting Mississauga Steelheads 3-2 and stretch North Bay’s point streak to its third game. Mitchell Russell (12) and Calvin Martin (17) traded first period goals. Following a scoreless middle frame, both Harrison Caines (6) and Dallas Stars draftee Thomas Harley (18) both scored in the third to force extra time, where a strong individual effort from Rose handed the Troops the win. Kai Edmonds stopped 19 of the 22 shots that came his way in net for the Fish and Vrbetic’s 38-save afternoon comes less than 24 hours after a 41-save shutout the night before.  The Battalion continue to round out the Central Division’s fifth place spot but see their record improve to 13-38-3-0, while the Steelheads’ tally drops below .500 to 24-25-4-1 as they sit tied with the Barrie Colts for second in the division.
GAME CENTRE

WINDSOR 3, OTTAWA 2 SO
Will Cuylle scored the lone shootout goal to send his Windsor Spitfires home with a 3-2 win, handing the first place Ottawa 67’s their first loss on home ice since Nov. 8. Nashville Predators prospect Egor Afanasyev (25) and Columbus Blue Jackets pick Tyler Angle (26) pushed the Spits up 2-0 heading into the third period. In the game’s final minutes, Ottawa overager Austen Keating (28) cut Windsor’s lead in half before Jack Quinn’s league-leading 45th goal of the season came with nine seconds left on the clock to tie things up at two. Cuylle, a top NHL Draft prospect, would find the back of the net in the shootout, and Ottawa would fall in their first post-regulation loss of the season. The shots ended 36-24 in favour of the Barber Poles, whose record moves to 42-8-0-1 on the year. With their third straight win, Windsor improves to 32-15-5-0 as they remain third in the West Division, one point back of the red hot Flint Firebirds.
GAME CENTRE

SUDBURY 7, NIAGARA 1
Buffalo Sabres prospect Matej Pekar (23, 24, 25) recorded his fourth hat-trick of the season as the Sudbury Wolves earned their fourth straight win in a 7-1 blowout of the division rival Niagara IceDogs. Pekar scored two early goals 25 seconds apart to open the scoring, before rookie Kosta Manikis (6) and Carolina Hurricanes prospect Blake Murray (26) followed up in the middle frame to widen their advantage to 4-0.  Jackson Doherty (4) finally gave Niagara some life in the opening minutes of the third, but another two from Pekar and Manikis (7), who posted a career-high two goal game, pushed the Wolves further ahead. Murray (27) capped off his two-goal game on the power play with 1:44 to go, earning the Wolves their seventh and final goal. Andrew MacLean faced 48 shots in net between the pipes for the IceDogs while Christian Purboo shut down 27 of the 28 shots he faced. The Central Division-leading Wolves move up to 29-24-1-0 on the season, while the IceDogs fall to 17-33-4-1 at fourth in the division with a 12th consecutive loss.
GAME CENTRE