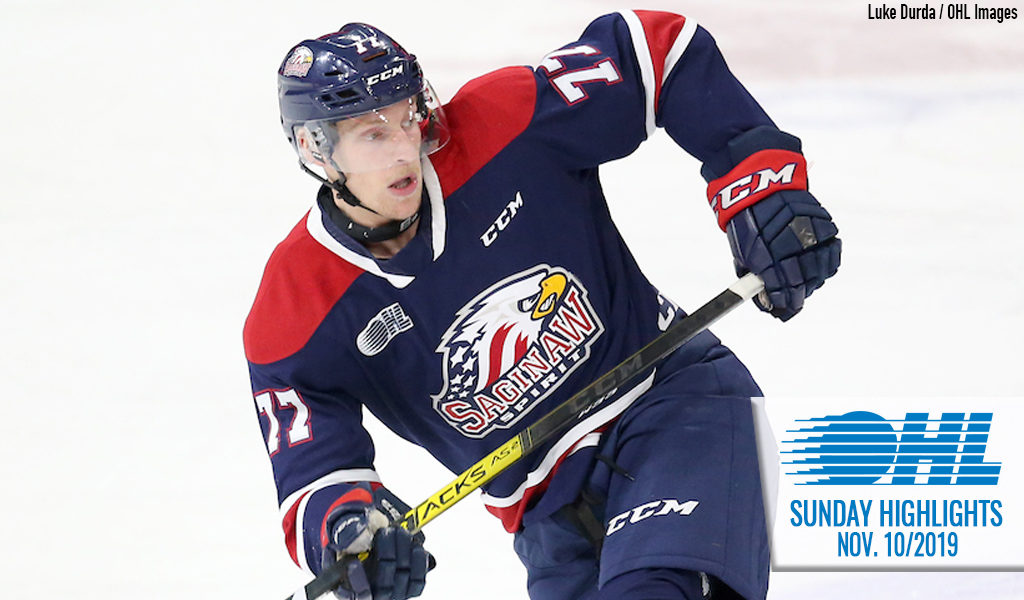 SAGINAW 7, WINDSOR 6 – OT
The Saginaw Spirit completed one of the more remarkable comebacks in recent OHL history, rallying from down 6-3 with three goals in a span of 1:18 to tie things at six before veteran defenceman Reilly Webb (2) scored the game winner 2:26 into overtime. Damien Giroux (14) scored the tying goal with just two seconds left in the third period as the Spirit stunned the 5,163 at the WFCU Centre, ending the Spitfires’ seven-game winning streak. Blade Jenkins (6) recorded four points on the afternoon while Cole Perfetti (6) had a goal and two assists. Other Spirit goals came from Camaryn Baber (2), Cole Coskey (12) and Jake Goldowski (5) while Marshall Frappier made 31 saves for the win. The Spits let one get away but still managed to earn a point as Nashville Predators prospect Egor Afanasyev (7, 8) scored twice while Curtis Douglas (8), Matthew Maggio (2), Tyler Angle (11) and Daniel D’Amico (5) tacked on singles. Angle, who will compete for Team OHL in Monday’s Game 4 of the CIBC Canada Russia Series, had a goal and two assists in the game. Saginaw takes the second of back-to-back weekend wins, improving to 11-6-1-1 while Windsor falls to 11-3-2-0.
GAME CENTRE

OTTAWA 3, PETERBOROUGH 2 – OT
The Ottawa 67’s defeated the Peterborough Petes on their third try this season as Jack Quinn (10) scored a beautiful overtime winner 1:25 into the extra frame. The 67’s took a 3-2 road win in Peterborough, overcoming a 2-0 deficit as Joseph Garreffa (6, 7) scored a pair, helping the Barber Poles net three unanswered. Cedrick Andree made 30 saves for the victory opposite Hunter Jones who kicked out 22. Cameron Butler (7) and Liam Kirk (11) scored Peterborough goals as the Petes were without injured leading scorer Nick Robertson. The 67’s pull to within one point of second place Peterborough in the East Division, sporting a 13-5-0-0 record as compared to the Petes’ 13-5-1-0 mark.
GAME CENTRE

OWEN SOUND 4, ERIE 3 – SO
Mack Guzda made 50 saves before stopping two of three in the shootout to lead the Owen Sound Attack to a 4-3 win over visiting Erie. The Otters tied things up 3:06 into the third period on Brett Bressette’s (1) first OHL goal, forcing overtime and a shootout where the Bears prevailed on home ice. Erie outshot Owen Sound 53-32 but Guzda was the difference in this one. Adam McMaster (4), Aidan Dudas (9) and Brady Lyle (4) scored Owen Sound goals before Lyle and Matthew Philip capitalized in the shootout. Brendan Hoffmann (2) and Danial Singer (6) joined Bressette in the goal-scoring department for the Otters while Aidan Campbell helped his team earn a point with a 29-save showing. The Attack improves to 10-5-1-1 for second in the Midwest Division while Erie trails close behind at 9-6-1-3.
GAME CENTRE

NIAGARA 5, HAMILTON 4
Ivan Lodnia (6, 7) and Akil Thomas (8, 9) combined for nine points as the Niagara IceDogs broke out of their offensive funk in a big way, defeating the Hamilton Bulldogs 5-4 on the road. The IceDogs, who entered play off consecutive shutout losses, wasted little time getting things going as Thomas and Lodnia both scored first period goals before the host Bulldogs rattled off three of their own to take a 3-2 lead after 20 minutes. The IceDogs pulled ahead once again, this time with three straight capped-off by Andrew Bruder’s (2) third period game winner on the power play. Payton Vescio (2), Arthur Kaliyev (21), Jan Jenik (12) and Tag Bertuzzi (7) scored Hamilton goals in the loss as they outshot Niagara 41-20. Jenik led the way with a goal and three assists to his credit. Niagara’s Tucker Tynan earned the win in goal with a 37-save performance that included a penalty shot denial of Hamilton’s Liam Van Loon. The IceDogs end their drought, returning to the win column to improve to 6-11-2-1. Hamilton drops a third straight, falling to 8-11-1-0.
GAME CENTRE

OSHAWA 4, KITCHENER 2
Florida Panthers prospect Serron Noel (6, 7, 8) led the Oshawa Generals’ charge to victory on Sunday as they doubled-up visiting Kitchener 4-2 behind his first hat-trick of the campaign. Brett Neumann (15) also scored for Oshawa while Noel picked up an assist, giving him points on all four Oshawa goals scored in the win. Rookie netminder Zachary Paputsakis came up with 36 saves to earn his third consecutive win while Winnipeg Jets prospect Giovanni Vallati had two assists on the back end. Liam Hawel (6) and Riley Damiani (8) provided Kitchener goals as the Rangers lost their third straight to fall to 6-6-2-2. Kitchener outshot Oshawa 38-30 but the CHL’s fourth-ranked Generals found a way, improving to 14-3-0-1 atop the East Division.
GAME CENTRE

SARNIA 4, NORTH BAY 2
The Sarnia Sting won their fourth straight and ninth game in the past 10 as Sean Josling (17, 18) scored twice in a 4-2 victory over visiting North Bay. Anthony Tabak (5) and Theo Hill (4) tacked on Sarnia goals while Jamieson Rees had a pair of assists and Ethan Langevin made 27 saves. Brandon Coe (5) and Mason Primeau (6) accounted for Battalion goals as the Troops’ woes continued in their 10th straight loss. The Battalion limited Sarnia to just 21 shots on Sunday but return home pointless on their weekend road trip, falling to 3-16-0-0. The Sting are now up to 9-8-0-0 on the season.
GAME CENTRE