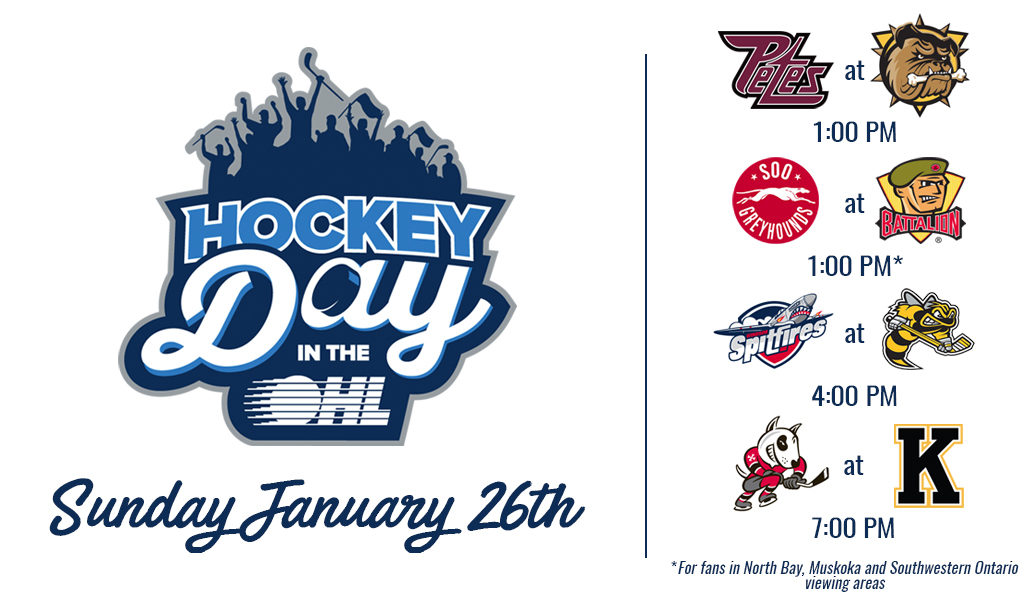 Get ready for a Sunday triple-header of OHL action with YourTV’s Hockey Day in the OHL!

The broadcast begins at 1:00pm when the Peterborough Petes visit the Hamilton Bulldogs. Fans in North Bay, Muskoka and Southwestern Ontario viewing areas will take in the Soo Greyhounds visiting the North Bay Battalion. The action continues province-wide at 4:05pm when the Sarnia Sting play host to the Windsor Spitfires.  The day concludes with the Niagara IceDogs travelling to take on the Kingston Frontenacs at 7:00pm.

All games will be part of a full day of continuous OHL coverage on YourTV in markets across Ontario, on Cable 14 in Hamilton, and on the OHL Action Pak.

In addition to the on-ice action, the broadcast will include feature stories from across the OHL.

We’ll get to know North Bay’s Christopoulos twins, who are suiting up for the Battalion while carrying on the legacy of the Don Mills Flyers who were 2019 OHL Cup Powered by Under Armour Champions. We will also get to know more about Peterborough Petes goaltender Hunter Jones and his charitable efforts over the Holiday break, take a behind-the-scenes look at the job of an OHL equipment manager, join the Niagara IceDogs in distributing the stuffed animals collected in their annual teddy bear toss, learn more about the Hamilton Bulldogs Foundation and its work in the Hamilton-Wentworth Region as well as get to know several of the League’s top NHL Draft prospects.

OHL Director of Player Recruitment Kyle Pereira will join host Terry Doyle in studio to chat about some of the League’s player programs and development initiatives.

Hockey Day in the OHL is available exclusively on YourTV. For more information and scheduling details in your community please visit www.yourtv.tv.