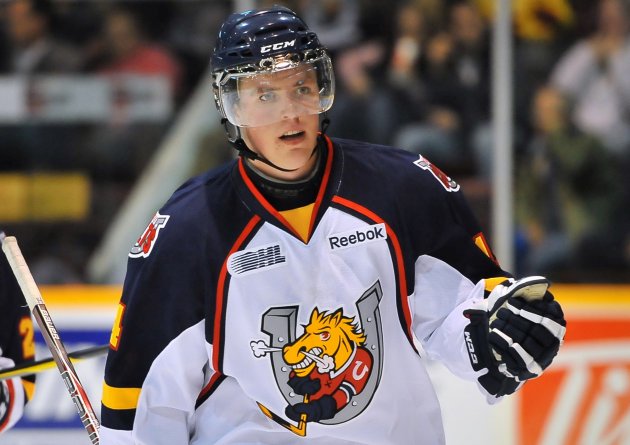 Toronto, ON – The Ontario Hockey League today announced that for the second time this season Tanner Pearson of the Barrie Colts is the OHL Player of the Week.  For the week ending November 20 Pearson led the OHL with 10 points in three games scoring three goals and seven assists with a plus-minus rating of plus-3.

Pearson helped the Colts win three straight games for the first time this season beginning Thursday night with a 5-3 win over the Sudbury Wolves where he picked up one assist.  On Friday night Pearson had the best game of his career recording his first six-point game as part of a 6-5 overtime win over the Ottawa 67’s.  In that contest he was named first star with his second hat-trick of the season which included the game-winner just 48 seconds into the extra frame, and chipped in three assists which included a set-up of Ivan Telegin’s game-tying goal in the final second of regulation play.  Pearson’s week wrapped up on Sunday as third star of a 3-1 win over the Kingston Frontenacs where he had three assists helping Telegin record his first hat-trick of the season.  In addition to his offensive success with the Colts this week, Pearson also scored the opening goal for Team OHL last Monday night in a 6-3 win over Team Russia in the 2011 SUBWAY Super Series in Sault Ste. Marie, ON.

Pearson, a 19-year-old from Kitchener, ON, is playing in his second OHL season with the Colts.  He currently leads the league in scoring with a career-high 18 goals and 33 assists for 51 points in 22 games.  He recorded two goals in two games with Team OHL in the SUBWAY Super Series and was recently ranked 22 among OHL skaters eligible for the 2012 NHL Entry Draft by NHL Central Scouting.

Also considered for the award this week was Tyler Toffoli of the Ottawa 67’s and Tobias Rieder of the Kitchener Rangers.  Toffoli, a Los Angeles Kings prospect scored five goals and three assists for eight points in three games while Rieder, an Edmonton Oilers prospect, scored four goals and three assists for seven points in three games.  In goal, Toronto Maple Leafs prospect Garret Sparks went 2-0-0-0 recording his first career OHL shutout and posted a goals-against-average of 1.00 and save percentage of .962.