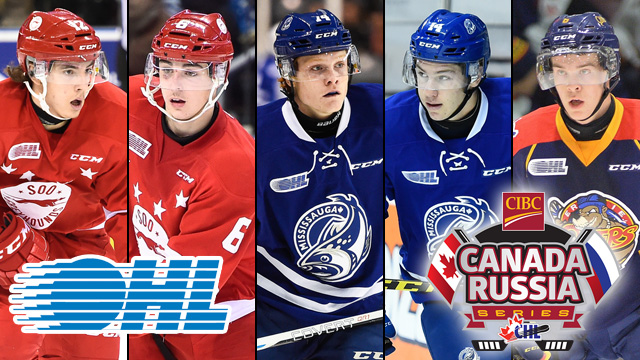 Toronto, ON – The Ontario Hockey League in association with the Canadian Hockey League today announced the addition of five players to rosters for 2016 CIBC Canada Russia Series games hosted by the OHL’s North Bay Battalion and Hamilton Bulldogs.

Boris Katchouk of the Sault Ste. Marie Greyhounds has been added to Team OHL for both games taking place November 10 in North Bay and November 14 in Hamilton.  Two players, including forward Owen Tippett of the Mississauga Steelheads and defenceman Colton White of the Greyhounds, will suit up for Team OHL’s game in North Bay, while Steelheads forward Nathan Bastian and defenceman Jordan Sambrook of the Erie Otters will dress in Hamilton.  In addition, the league has announced that Greyhounds’ captain Blake Speers scheduled to compete in both games will be unable to participate due to injury.

Of the group, Bastian has prior experience competing in the series as a member of Team OHL’s 3-0 victory last season in Owen Sound.  Both Katchouk and Tippett have international experience representing Canada at the 2016 IIHF World Under-18 Championship, while Tippett also competed with Canada’s Under-18 team at the 2016 Ivan Hlinka Memorial Cup and won gold at the 2015 World Under-17 Hockey Challenge.

The 2016 CIBC Canada Russia series is supported by title sponsor and Official Bank of the CHL, CIBC, and CHL associate sponsors Cooper Tire, autoTRADER.ca and Sherwin-Williams.  All games will be broadcast nationally on Sportsnet and TVA Sports.

For event information including how to purchase tickets please visit www.chlcanadarussia.ca.