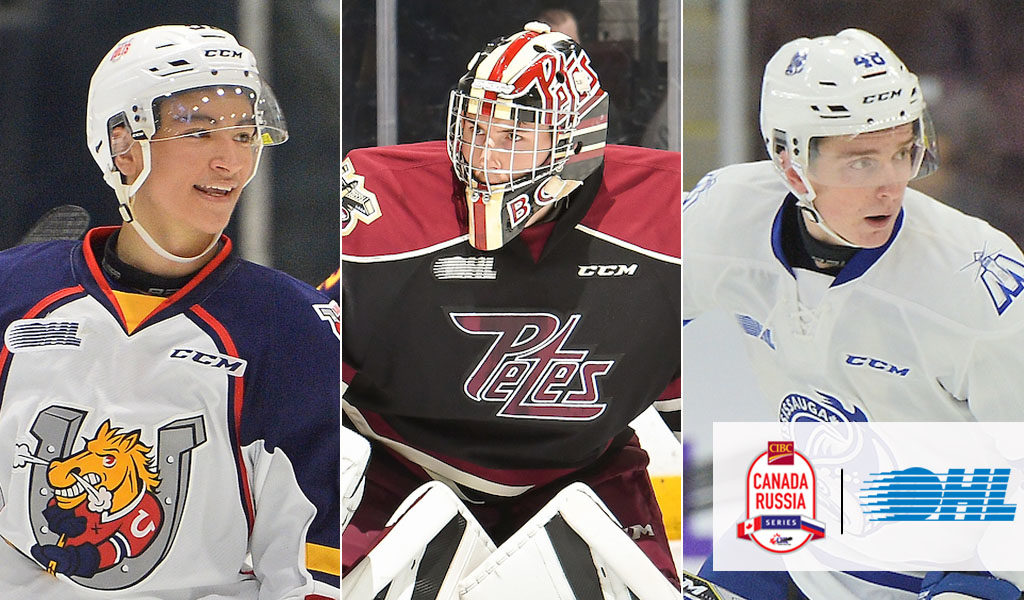 It’s not often that three draft eligible OHLers get into the same game in this event. With NHL Central Scouting’s 2018 NHL Draft November ‘Players to Watch’ List released on Monday, the young trio is looking to make the most of the opportunity.

“We have a lot of talent on this team, and to see these fans wearing the Canadian jersey and come out to support you, it’s just amazing. I got chills every time I stepped on the ice.” — Ryan Suzuki#HlinkaGretzkyCup https://t.co/1PWUPI2hcB pic.twitter.com/QPjtSDCoLV

“It’s an honour to wear the OHL logo and play in this event,” said Suzuki, who follows in the footsteps of older brother Nick (Owen Sound Attack) who captained Team OHL to a 3-1 victory in Game 3 on Thursday. “There’ll be a lot of people watching, but I think I speak for all of these guys when I say I’m just here to play my game and see what I can do.”

Suzuki was one of three ‘A’ rated OHL players on Monday’s release, joining forward Arthur Kaliyev (Hamilton Bulldogs) and blueliner Vladislav Kolyachonok (Flint Firebirds) at the top of the list.

The former first overall pick of the 2017 OHL Priority Selection welcomed words of wisdom from his older brother following Game 3.

“He just told me that it’s fast, and that my style of play should translate well,” he recalled. “It really comes down to playing fast and thinking quickly and beyond that, having fun and enjoying the moment because these games don’t come around too often.”

Jones and Harley were both listed as ‘B’ rated prospects on Monday, forecasting them as potential second or third round NHL Draft candidates.

The 6-foot-4, 194Ib. Jones, who shares the hometown of Brantford, Ont. with the ‘Great One’ Wayne Gretzky, leads the OHL with 1074 minutes played. He came into his draft year ready for a workload.

“The Petes were pretty open with me right from day one that I’d be given every opportunity and would be playing a lot,” said Jones, who took over the starting role in Peterborough after Dylan Wells turned pro in the Edmonton Oilers organization. “I think the whole development process has been really important for me though. I had a chance to play some Tier II, experience playing for Hockey Canada at both the Under-17 and World Junior A Challenge events, and got my feet wet in the OHL. Now I want to make the most of my chance to be a part of Team OHL.”

Harley joins Mississauga Steelheads teammates Owen Tippett and Ryan McLeod in tonight’s lineup. The Syracuse, NY native is the son of Canadian parents. Harley’s father, an orthopaedic surgeon, attended the University of Alberta before relocating to upstate New York where Thomas grew up playing before moving to Toronto at the age of 15 to suit up for the GTHL’s Vaughan Kings.

Mississauga’s first round pick in the 2017 OHL Priority Selection has already exceeded his point total from last season, recording 16 points (3-13–16) over 19 games.

“It’s always great to be recognized for your accomplishments,” he said. “I think it speaks volumes to the whole organization in Mississauga, our coaches and the time they’ve put in to have the three of us playing in this game tonight.”

Catch all of tonight’s action on Sportsnet or streaming live at CHLLIVE.com. The puck drops at 7 ET/4 PT.