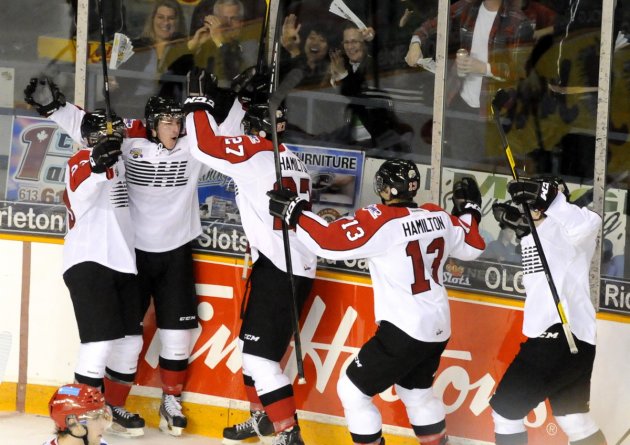 Toronto, ON – The Canadian Hockey League in association with the Ontario Hockey League and the Guelph Storm and Sarnia Sting Hockey Clubs today announced the Team OHL rosters for the 2012 SUBWAY® Super Series.

Team OHL will face the Russian National Junior Team in Game 3 of the series in Guelph on Thursday November 8 with Sarnia hosting Game 4 on Monday November 12.  The series also includes two games in the QMJHL prior to both OHL games, with the series wrapping up with two games hosted by the WHL.

34 players have been selected for Team OHL rosters including five members of Canada’s National Junior Team that won bronze at the 2012 IIHF World Junior Championship.  That group includes defencemen Dougie Hamilton of the Niagara IceDogs, Scott Harrington of the London Knights, and forwards Boone Jenner of the Oshawa Generals, Mark Scheifele of the Barrie Colts, and Ryan Strome of the IceDogs.  Seven more players also competed in the summer’s Canada-Russia Challenge and will represent Team OHL including goaltender Malcolm Subban of the Belleville Bulls, defencemen Cody Ceci of the Ottawa 67’s, Adam Pelech of the Erie Otters, and Ryan Murphy of the Kitchener Rangers, along with forwards Lucas Lessio of the Generals, Sean Monahan of the 67’s, and Thomas Wilson of the Plymouth Whalers.  Subban, Ceci, and Wilson are among six players on Team OHL that were selected in the first round of the 2012 NHL Entry Draft along with the Bulls’ Brendan Gaunce, Slater Koekkoek of the Peterborough Petes, and the Generals’ Scott Laughton.

Team OHL enters the tenth anniversary of this event with a perfect 18-0 record against Team Russia following a 10-7 win last season in Ottawa, and a 6-3 victory in Sault Ste. Marie.

The 2012 SUBWAY® Super Series is supported by CHL associate sponsors, Bank of Montreal, Old Dutch, and Post.  All games will be broadcast nationally on Sportsnet with QMJHL games shown on TVA Sports.

The schedule for the 2012 SUBWAY® Super Series is as follows:

Game 3 – Thursday November 8 at Guelph, ON

Game 5 – Wednesday November 14 at Vancouver, BC

Game 6 – Thursday November 15 at Victoria, BC

For more information including how to purchase tickets please visit www.subwaysuperseries.ca.