Team OHL too much for Russia in Game 3 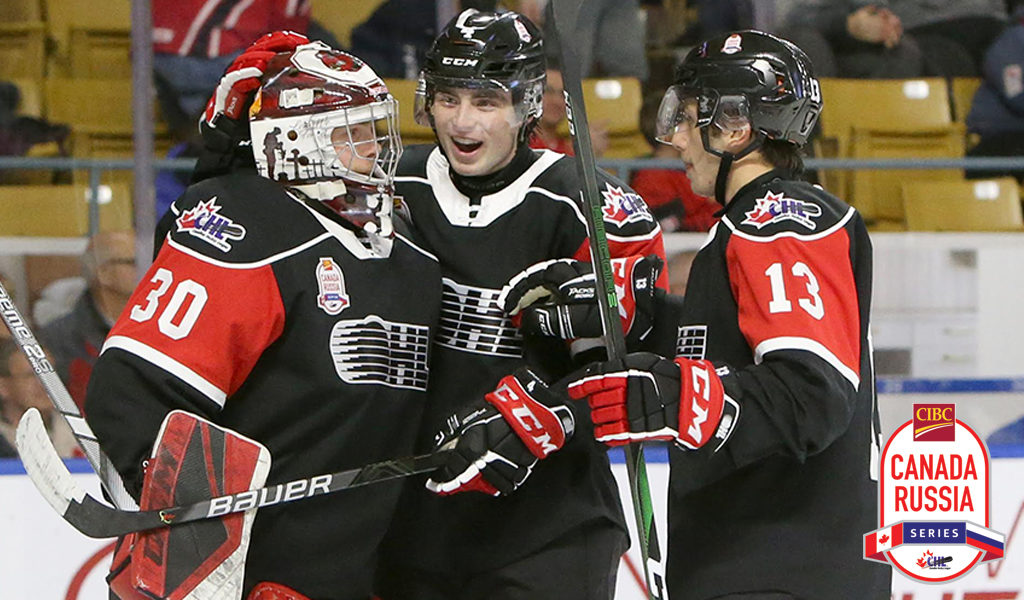 Kitchener, Ont. – Skating in its first game of the 2019 CIBC Canada Russia Series, Team OHL showed little sign of needing time to come together as a group as the squad cruised to a 4-1 victory over Russia.

Opening the scoring just over five minutes into the initial frame, Team OHL capitalized on the man advantage and grabbed an early lead courtesy of Flint Firebirds captain and Dallas Stars prospect Ty Dellandrea who knocked a rebound by Russian netminder Daniil Isayev.

Team OHL then pushed its lead to two less than four minutes later when Saginaw Spirit centre and 2020 NHL Draft hopeful Cole Perfetti cashed in from the doorstep to net the eventual game winner and help his squad carry a 2-0 margin into the first intermission.

Not yet finished, Team OHL then built a three-goal cushion at the 6:40 mark of the middle frame when London Knights forward and Washington Capitals up-and-comer Connor McMichael wired home a perfect shot from the slot. The tally drew an assist from Sudbury Wolves centre Quinton Byfield, who notched his second helper of the game after first getting his name on the scoresheet upon setting up the game-opening goal.

Byfield joins Perfetti – as well as Erie Otters defenceman Jamie Drysdale – as one of three draft eligibles from Team OHL who project as first-round selections in the coming 2020 NHL Draft per NHL Central Scouting. Meanwhile, the accolades continued for Byfield as the budding talent also wrapped up the night with Player of the Game recognition.

“They’re playing well,” Team OHL head coach Dale Hunter said following the victory. “The Russians are a big, heavy team and (Byfield and Perfetti) held the7ir own against big, strong guys who are a lot older than them, so that’s a credit to them.”

A snipe if there ever was one 🎯@Capitals prospect @con91mcmichael of the @GoLondonKnights rips it top shelf to put Team #OHL up 3-0 after two. @cibc #CANvsRUS 🇨🇦🇷🇺 pic.twitter.com/w2KbuH6Mzv

Team OHL then punctuated the victory late in the final frame on a goal by Niagara IceDogs captain and Los Angeles Kings prospect Akil Thomas who found the back of the cage at the 16:50 mark. Not to be outdone, however, the Russians got on the board with 42 seconds remaining in the game on a goal by KHL forward Vladislav Mikhailov who put a puck by Ottawa 67’s netminder Cedrick Andree to spoil a shared shutout after Nico Daws of the Guelph Storm turned aside 13 shots by the halfway mark.

The win makes it three straight for Team OHL at the event in Kitchener, following other triumphs in 2005 and 2007. An energetic sold out crowd of 7,436 cheered Team OHL onto victory.

Team OHL will now look to secure its second straight victory when the tournament shifts to London on Monday for Game 4 of the 2019 CIBC Canada Russia Series.