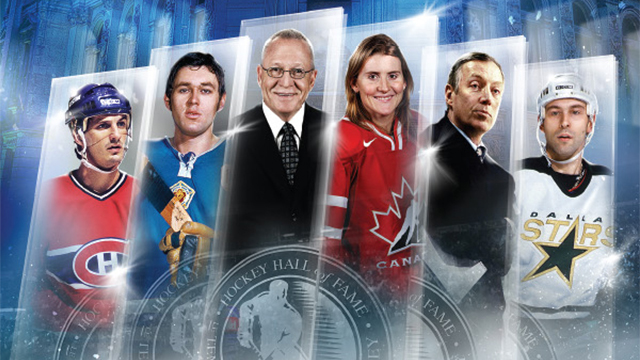 Six new members will be welcomed into hockey’s most exclusive club this November, including former OHL champion Jim Rutherford in the Builder Category alongside NCAA coach Jerry York, while Guy Carbonneau, Vaclav Nedomansky, Hayley Wickenheiser and Sergei Zubov will enter the Hall in the Player Category.

Though he played 13 years as an NHL goaltender, it’s been Jim Rutherford’s contributions from front offices that have truly made a mark. Following retirement from his NHL playing career, , Rutherford won the 1987-88 OHL championship as the GM of the Windsor Compuware Spitfires. As GM of the NHL’s Carolina Hurricanes, Rutherford went on to win the Stanley Cup, followed by back-to-back Cup championships with the Pittsburgh Penguins.

Jerry York is entering his 46th season of coaching – a staggering accomplishment. York was the first NCAA Division 1 coach to reach 1,000 wins, and has won numerous Coach of the Year awards. In 2010, he was named one of the recipients of the Lester Patrick Trophy for his contributions to hockey in the U.S.

A former captain of the Montreal Canadiens, Guy Carbonneau was celebrated by fans for his defensive play, and was awarded three Frank Selke Memorial Trophies for his efforts as the league’s top defensive forward. Carbonneau was a member of three Stanley Cup-winning teams in Montreal, and also played for the St. Louis Blues and Dallas Stars.

Vaclav Nedomansky played 12 seasons with Slovan Bratislava before his move to North America to join the WHA and NHL. Internationally, he won one gold, five silver and three bronze medals at the IIHF Men’s World Ice Hockey Championships, and added silver and bronze Olympic medals to his collection.

Hayley Wickenheiser is a name synonymous with women’s hockey. Her career with Canada’s National Women’s Team spanned 23 years as she won seven gold and six silver medals at the IIHF Women’s World Ice Hockey Championship, and four gold, plus one silver medal at the Olympics.

Leading the New York Rangers with 89 points during the 1993-94 regular season, Sergei Zubov captured the Stanley Cup in his sophomore season. He spent time on the Pittsburgh Penguins, and captured his second Stanley Cup with the Dallas Stars. Internationally, Zubov is both a World Junior Championship and Olympic gold medalist.

Hockey fans will have the opportunity to be a part of the excitement throughout the weekend with tributes, including guest appearances, an exclusive Inductee Q&A Fan Forum, photo op with Legends Classic captains Mats Sundin and Nicklas Lidstrom, and the Haggar Hockey Hall of Fame Legends Classic at Scotiabank Arena, where the Class of 2019 receives their official Honoured Member Blazers at centre ice. The weekend’s events will culminate with the Induction Celebration Gala taking place during the evening of Monday, November 18.

Visit HHOF.com for more information on tickets and VIP packages, as well as the full weekend itinerary.