The Week That Was – CHL talent well represented at World Juniors 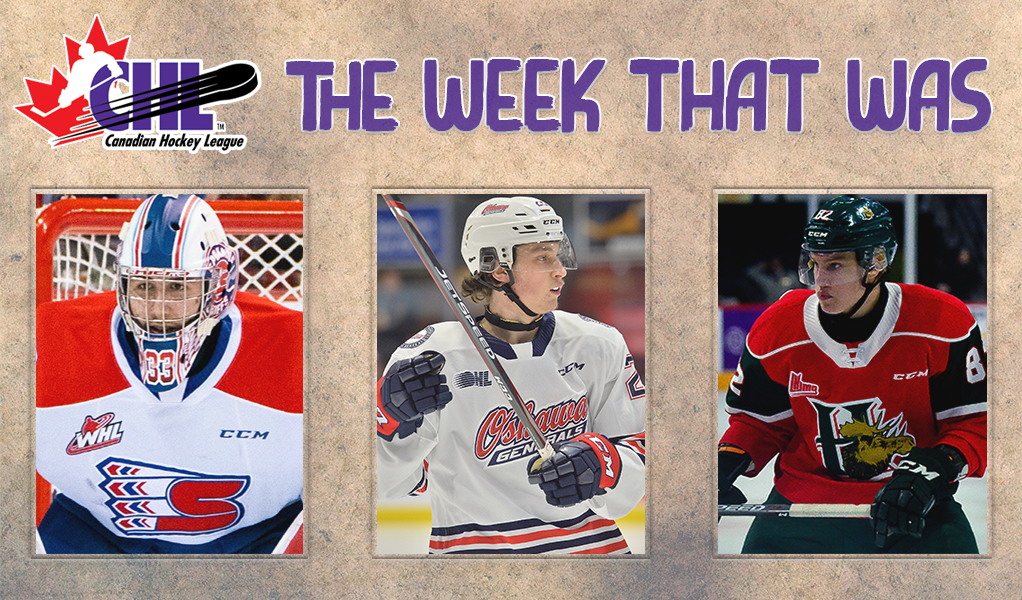 Following the news that Chicago Blackhawks forward and Saskatoon Blades graduate Kirby Dach would be sidelined for the entire 2021 World Junior Championship after sustaining a wrist injury in Canada’s lone pre-tournament game, one positive takeaway was that his absence would create an opportunity elsewhere.

Enter Philip Tomasino. Skating as the additional forward prior to the round-robin opener versus Germany, the Nashville Predators first-round pick and Oshawa Generals forward has be an offensive force for the Great White North since stepping in.

Skating on a line with Ryan Suzuki of the Saginaw Spirit and Dawson Mercer of the Chicoutimi Sagueneens, Tomasino has registered at least one point in all three games to stand with four goals and two assists, good for third in team scoring behind only Dylan Cozens (Lethbridge Hurricanes) and fellow OHL forward Quinton Byfield (Sudbury Wolves).

As @Oshawa_Generals star Philip Tomasino (@philtomasino26) looks to impress on the #WorldJuniors stage, he recalls the advice he was given from future @PredsNHL teammate and three-time @HC_WJC member Ryan Ellis.

“It’s tough seeing what happened to Kirby. He’s a great player and he’s our leader so that is obviously a tough situation,” Tomasino told reporters prior to the round-robin opener. “But it has given me an opportunity to be here so I am looking forward to it and it is going to be a lot fun.”

Chosen fifth overall by Niagara in the 2017 OHL Priority Selection, Tomasino skated two seasons with the IceDogs prior to joining the Generals last January. Following the deal, the Mississauga, Ont., native needed little time to adjust to his new surroundings, putting up 18 goals and 25 assists in 26 games with the Generals marked by a five-point debut before ultimately becoming one of just six CHL talents to reach the 100-point plateau last season, and the first Oshawa skater since 2008.

Tomasino now hopes he can add his latest accolade in the coming days as Canada continues its pursuit for its leading 19th gold-medal victory at the World Juniors.

Lukas Parik was all smiles.

Turning aside all 30 shots he faced, the Spokane Chiefs netminder made an impressive debut on the World Juniors stage in guiding his native Czech Republic to a 2-0 victory versus a favoured Russian squad in round-robin play Sunday.

“We played great as a team. We held to our system really good and I think that helped us,” Parik said postgame. “It was a great feeling. I can’t even describe it. I was just imagining this game could happen and the guys played great.”

The result was a familiar feeling for Parik who last year watched from the bench as the Czech Republic defeated Russia in a 4-3 final that saw countryman Lukas Dostal record the win.

Chosen in the opening round of the 2019 CHL Import Draft, Parik put together an impressive first season with the Chiefs last year in which he won 22 of his 32 appearances. He also made national headlines in March when he became the first Chiefs netminder to score a goal in a 3-0 victory versus the Kamloops Blazers in which he also stopped 36 shots to record his first career shutout.

Parik was selected in the third round of the 2019 NHL Draft by the Los Angeles Kings.

Call it a year of invaluable experience for Senna Peeters and his Austrian teammates.

With relegation not part of this year’s World Junior Championship, that ruling means all 10 teams will return for the 2022 rendition. In all, it also means the teams that do not realize as much on-ice success as hoped will gain a better idea of what to expect next winter.

Among those teams is Austria, a new entry to this year’s tournament following Kazakhstan’s relegation last year. Featuring key talents like Minnesota Wild first-round draft pick Marco Rossi of the Ottawa 67’s – and the reigning CHL top scorer who wrapped up last season with 120 points counting 39 goals and 81 assists in 56 appearances – the budding squad also features other talented up-and-comers like Peeters.

Austria is on the board! Senna Peeters gets his country's first goal of the 2021 #WorldJuniors on a great feed from Marco Kasper, cutting @russiahockey 's lead to 4-1 pic.twitter.com/c5QrA1kMpt

Passed over in the 2020 NHL Draft following a modest rookie campaign with the Halifax Mooseheads in which he recorded 33 points including a team-leading 23 goals in 57 games, Peeters remains determined to be a part of the 2021 class and knows that another strong season with the Mooseheads marked by an offensive uptick can help him make that dream a reality.

With travel restrictions and paused play forcing Peeters to begin the season competing in Finland, he plans to return to the Mooseheads following the completion of the World Juniors.

“We’re thrilled to have Senna back with the team,” Mooseheads general manager Cam Russell told The Chronicle Herald. “I think we already have a very talented group of forwards and his addition will make us that much better.”