The Week That Was – Making a mark at NHL camps 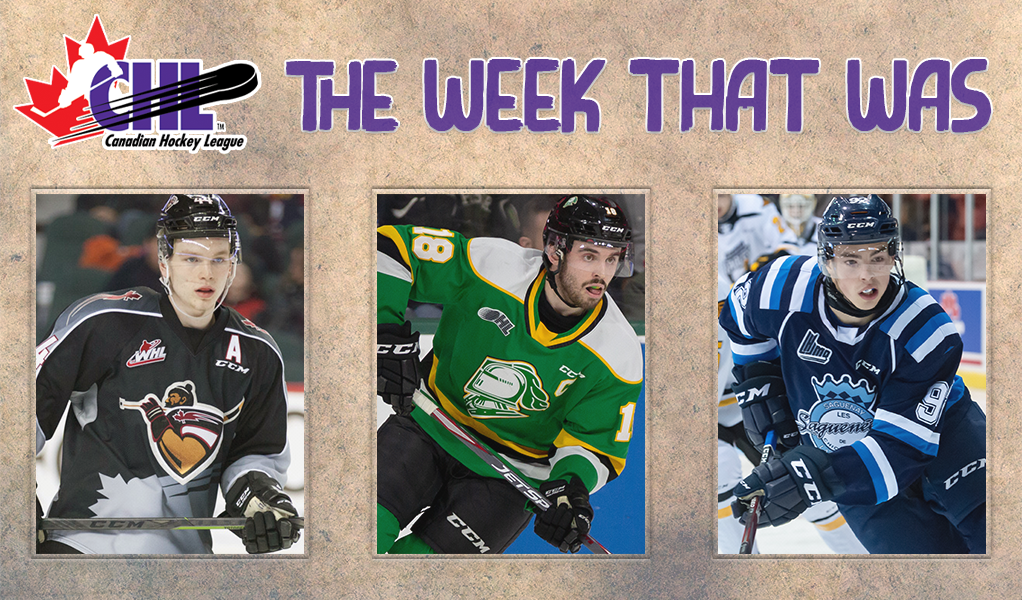 Bowen Byram is ready for his opportunity. He just has to wait a little longer.

Quarantining in Denver since Friday, the Vancouver Giants blue-liner and first-round pick of the Colorado Avalanche is attending his second NHL training camp, equipped with the lessons learned over the past season and after co-captaining Canada to silver at the 2021 World Juniors.

Eligible to join his future teammates on Friday – when the Avalanche will play their second game of the season in a back-to-back with the St. Louis Blues – Byram has already made a strong impression despite being prohibited from participating in training camp due to COVID-19 protocols.

“He was really making a push to help Canada try to get back in that (gold medal) game. I thought he was a play-driving defenceman,” Avalanche head coach Jared Bednar told Mike Chambers of the Denver Post. “He was up and involved in the rush. He was trying to be a difference-maker and that is exactly what we want to see from him here.”

Through seven appearances with Canada, Byram was a key offensive threat from the back end, leading all team defencemen with one goal and four assists for five points, a continuation of the strong puck skills he demonstrated over three full seasons with the Giants, including a career-high 71 points in 2018-19.

“He’s gotten way bigger and stronger, more confident, a little bit more relaxed,” Bednar added. “I’m excited to get him and see what he can do.”

Liam Foudy has had a little more time to prepare for his latest showing with the Columbus Blue Jackets.

Recalled from the London Knights last season on an emergency basis, the budding left-wing made a pair of appearances with the Blue Jackets in mid-February and recorded his first NHL point in his second contest, coming against the Buffalo Sabres. Evidently, the Knights’ co-captain made an impression as he was then back with the Blue Jackets for all 10 of the club’s postseason games when play resumed in the summer.

This time, however, he has had extra time to help him lock down a full-time roster spot ahead of the NHL season beginning Wednesday.

“My goal is to make this team. There is no other goal coming into this camp,” Foudy told Blue Jackets reporter Paul Svoboda. “I am coming in every day here and not getting too comfortable. I know spots are always on the line. I am trying to play the best I can and hold on to a spot and be on this roster.”

"My goal is to make this team. There's no other goal coming into this camp."

Roster spots are on the line, but Liam Foudy is confident he will have a role to play come opening night.#CBJ | @OhioHealthhttps://t.co/Yp2vgh90TE

Wrapping up his fourth season with the Knights with 28 goals and 40 assists for 68 points – and doing so in only 45 contests – Foudy undoubtedly brings a scoring touch, but his play away from the puck is his true pride. Voted the OHL Western Conference’s best skater as well as its top penalty killer in last year’s OHL Coaches Poll, those attributes have already caught the attention of Blue Jackets bench boss John Tortorella.

“We want to look at him, that’s for sure, as a penalty killer,” Tortorella added. “I think with that type of speed, and we all felt in the bubble and in the short time we have been with him, that he has the intelligence to do it. He has done it before, he wants to do it, (and) with that type of speed we want to give him a whack at it and try him with some different people.”

Chosen 18th overall in the 2018 NHL Draft, Foudy has spent his entire junior career with the Knights, collecting 97 goals and 94 assists for 191 points in 230 games played.

It wasn’t the news he was hoping for, but Hendrix Lapierre can’t deny that it was an amazing learning experience.

Among seven players returned by the Washington Capitals earlier this week, the Chicoutimi Sagueneens centre took in all he could in his brief tryout with the NHL club.

Zdeno Chara made his NHL debut a little more than four years before Hendrix Lapierre was even born.

Sharing the same practice ice with Stanley Cup champions like Capitals captain Alex Ovechkin and new recruit Zdeno Chara, it was the latest experience in what has been a whirlwind year for Lapierre who after being limited to an injury-shortened 19-game season in 2019-20 then heard his name called in the first round of the 2020 NHL Draft by the Capitals before auditioning with Canada at the national junior team selection camp.

“It was an incredible and very beneficial experience for me,” Lapierre said of Capitals’ camp, per Kevin Dubé of the Quebec Journal. “Just to see how the players behave and to play at this level, it has been very positive.

“I played for the same team as (Chara) in the two intra-team matches. I introduced myself, we shook hands, and talked a bit. It felt a little weird because I’ve been watching (him) on television for 10 or 15 years. It was special to see him and shake his hand but, at the same time, I was there for a reason. I am part of the same organization.”

Returning to the Sagueneens, Lapierre now looks to continue a strong start to the 2020-21 campaign in which he has recorded eight points on the season after notching three goals and five assists in just five appearances.