Generals’ Thomas Closes In On Savard for 5th All-Time 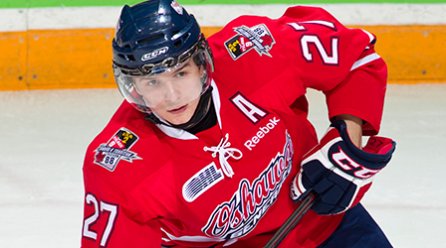 By Alex Headley – Special to www.oshawagenerals.com

Christian Thomas sets the bar high. After a 99 point season in 2010-2011, an encore performance this year was no easy task. Still, the man who was once traded for John Tavares is on the verge of his 3rd straight season with 30 goals or more in the OHL. Even more remarkable, the Rangers’ prospect is just 4 goals shy of Marc Savard for 5th all-time on the Generals’ goal scoring list.

“Last year for me was a really good season point wise,” said Thomas when asked to compare this year to last. “I got to score 50 goals which was one of my major goals.”

Coming into this season, Christian’s focus was slightly different. “I just wanted to develop my game as much as I could and be ready to try to play professional next year. I think I’ve gotten a lot better at aspects of my game that I needed to improve, and hopefully, next season I’ll be ready to make the jump.”

Selected by New York in the 2nd round of the 2010 draft, Thomas knows what the Rangers expect. At past camps, “they were more specific on what to get better at, things like moving the puck quick, give and goes, look up before you get the puck to make a quick play, things like that.”

This year, the suggestions were straightforward but still difficult. “At the end of training camp, the message was get bigger,” Thomas laughed like he’s heard this before. “Get bigger, get stronger and just try to work on every part of my game so that next year, I can maybe play in the AHL or make the NHL.”

Despite a slow start to the 2011-2012 campaign, Thomas’ point production has really heated up in the latter half of the season. Currently sitting at 29 goals and 58 points, the right winger knows that his past success means his days of sneaking up on teams are long over. Thomas sees how the opposition tries to shut him down. “On the power play, there’s always a guy really close to where I stand on the point. When we play on the road, there’s always a really good line or a solid D pairing out against our line.”

But adjustments make Thomas’ game grow stronger. “It makes it a lot tougher, but it challenges you to score against their best. It makes you better, and it will help me in the long run.”

It also helps that Thomas shares the burden with great line-mates like Scott Laughton and Andy Andreoff. “They’re really good players with the puck, they see the ice well, and we tend to find each other on the ice,” explained Thomas. “We really mesh well. They’ll make a good play in the defensive zone to get the puck out and it will translate to good offence.”

Thomas’ snap-shot is a huge part of his success and an endless source of wonderment for Gens’ fans around the water cooler. It turns out that Christian himself is somewhat at a loss to explain how he developed it. “A lot of people ask me that. I always just liked to shoot the puck at home. I guess my dad gave me a couple of tips on how to shoot. I think it’s just the way it comes off my stick. I just try to shoot as hard as I can every time I have the puck. I somewhat know where the net is and try to put it in that area. Sometimes, it goes in.”

It goes in all right. 128 times as a General to be exact. So just how aware is Christian that he’s only 4 goals away from tying Marc Savard for 5th all-time amongst Generals’ goal scorers?

“Actually, I figured that out three quarters of the way through this season,” Thomas admitted.  “Tricia [Leone] who works for the team let me know. That would be awesome to be top 5 in Oshawa Generals goal scoring and to pass someone who had such an amazing career like Marc Savard. I’m going to try my best to pass that and get into some history.”

But Thomas’ main objective still remains doing everything possible to get the Generals into the playoffs. “Everyone’s been saying that the whole year; how amazing our team is on paper,” Thomas acknowledged, talking about Oshawa’s battle to meet expectations. “Everyone thinks we should be first place in the league, and I think the same thing. We should be up there, in the top 5 at least. If we figure it out in the last 10 games here, we should definitely make the playoffs.”

Thomas knows if Oshawa gets in, they could certainly make some noise. “Whatever team we get to face in the playoffs, they should be worried,” predicted Thomas, “because you never know what we can do.”