Thomas on his golden moment, his season, and the importance of representation 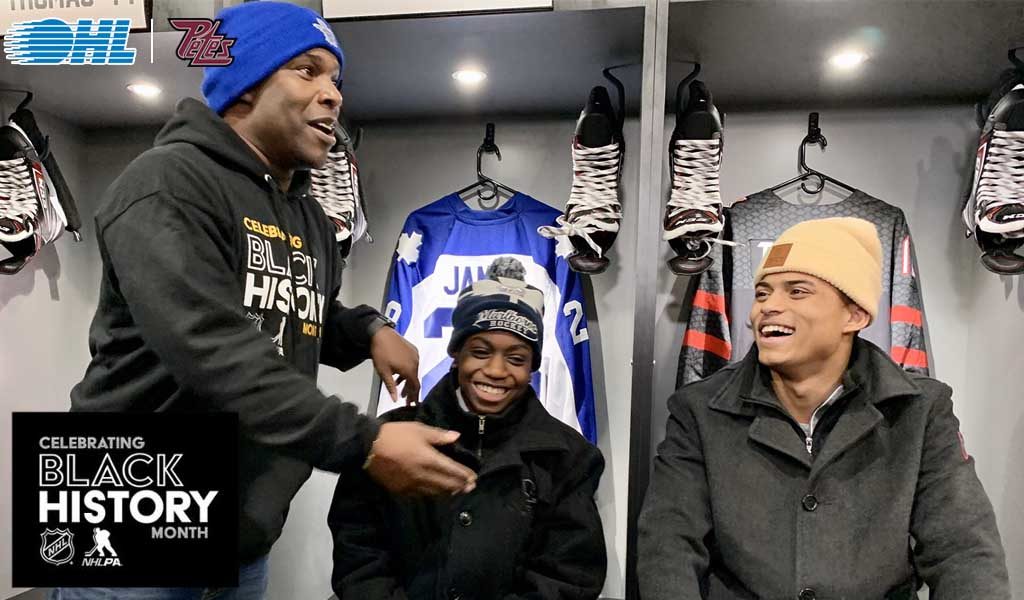 The NHL’s American Legacy Black Hockey History Tour makes a stop at Scarborough’s Malvern Community Centre. In the mobile museum sit two makeshift hockey stalls, and sitting in those stalls are Akil Thomas of the Peterborough Petes and Nathaniel Adams of the Toronto Marlboros.

The stalls are decorated with Thomas’ Petes and Team Canada jerseys, and are lined with corresponding nameplates.

Thomas and Adams chat about a few different things: the fact that it’s Adams’ birthday, Adams’ upcoming game that evening, the team Adams will be facing.

While they chat, Kwame Mason excitedly addresses the room full of people sharing in the Black History Month celebration.

“When we’re talking about diversity and inclusion, it’s all about representation, and this is what it is.”

Mason is the co-creator of the mobile museum that features photos, blurbs, and interactive displays that highlight trailblazing players and members of the hockey community over the course of history.

He’s also the director of the film “Soul On Ice: Past, Present & Future,” that discusses the history of black hockey players and features both Thomas and Adams as younger players.

“Just seeing the game winning goal is going to inspire him to do much better,” he continues.

Thomas describes himself as a player with a lot of heart, who comes alive when the stakes get high. Growing up, he remembers watching players like John Tavares and Jordan Eberle compete at the World Juniors.

“Seeing what they did, it inspired me as a young kid to work really hard to one day be like them,” said Thomas.

He most likely wouldn’t have predicted he’d have his own Eberle moment – or Sidney Crosby moment, or Paul Henderson moment – when he scored the winning goal for Team Canada in January to land them the gold medal in a highly anticipated rematch against Russia. In fact, if you ask him about it, he’ll probably say the whole thing is still a bit of a blur.

Coming through when the stakes are high seems pretty bang on.

“Luckily it paid off and I can’t be much happier with the way things turned out.”

December and January were a bit of a whirlwind for the 20-year-old centreman.

“I was obviously on a high for a couple weeks there and that felt good, but it’s good to come back to reality and just practice, workout, and do regular day-to-day things,” said Thomas of the last couple months.

“It feels like I’m back at life again, and I’m happy.”

Upon returning from his gold medal stint overseas, Thomas was traded from the Niagara IceDogs to the Peterborough Petes only days later.

“It’s been crazy,” he said. “In the last week, that’s when things settled down.”

Now, comfortable with his new teammates, new billets, and new coaching staff, Thomas is focused on the rest of the season – and is confident he can help his team to an OHL Championship.

“I feel really good about [my season]. We have a pretty good team, really, really good coaches, and I think we can win this year,” he said.

“We’re going to have to be a little bit better heading into the last stretch here but I think we have a special team and I don’t think too many teams can beat us.”

Beyond that (and in between maintaining his clothing line, Zale) he’s focused on making the NHL.

But amidst it all, he wants to be a role model for black hockey players like himself.

“I think the black hockey community is pretty tight and pretty close, especially in Toronto,” he said at the event.

“We look after each other and I’m thankful. Just hearing stuff from guys who have made it, it hits a little bit differently and means a lot to me.”

To a large group of reporters, fans, and later, a group of young kids playing hockey in the gymnasium, he spoke about the importance of representation, and how it’s helped him on his journey.

“It’s important because it shows the kids coming up that they can do it and, just to see someone who looks like you doing it, it means the world.”

Among those he’s looked up to are past and current NHL products Anthony and Chris Stewart.

“[Anthony]’s a guy who mentored me a little bit. He talked to me and told me what to expect. I ended up seeing his brother as well this summer, and he said some of the same stuff.”

With an NHL career of his own in sight, the Los Angeles Kings prospect plans on continuing to offer that same mentorship to future players.

“When I was young and wanted to play hockey, I didn’t know anyone I could look up to, and I’m just really happy these guys have the opportunity to have people to look up to,” said Mason.

“If I can hopefully make the NHL one day and do the exact same thing he did to me, that’d be huge for another kid,” Thomas said.

“I’ve had the privilege to have a lot of people impact me and guide me in the right direction, and if I can be someone for another kid, maybe another kid who, in ten, years scores a big goal for Team Canada, then that’d be amazing.”

2019-20 Recaps
Saturday Highlights: Ingham the answer against Firebirds
15 hours ago