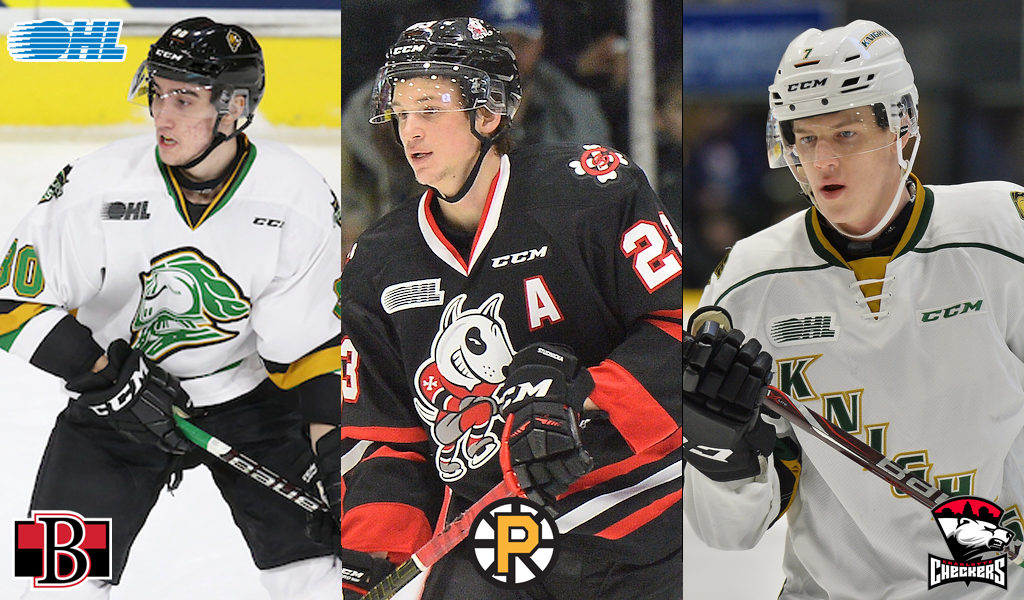 The American Hockey League announced the 2019-20 AHL All-Rookie team as voted on by coaches, media and players from all 31 clubs. The team includes three OHL graduates in forwards Alex Formenton and Jack Studnicka as well as defenseman Joey Keane.

Alex Formenton (London – 2016-19)
In his first full year with the Belleville Senators, former London Knight Alex Formenton put up 27 goals and 53 points in 61 games, finishing second among AHL rookies in both categories. The 20-year-old Barrie native played three seasons with the Knights, putting up 116 points in 114 games. He was a second round pick of the Ottawa Senators in the 2017 NHL Draft and has appeared in 10 games at the NHL level over which he’s scored one goal. Formenton also won gold with Team Canada at the 2018 IIHF World Junior Championship.

Jack Studnicka (Oshawa, Niagara – 2015-19)
Following a four-year OHL career, Jack Studnicka’s AHL entrance was a strong one. A second round pick of the Boston Bruins in the 2017 NHL Draft, the 21-year-old forward led the Atlantic Division champion Providence Bruins in goals (23), assists (26) and points (49) over 60 appearances this season. He also posted seven shorthanded goals, tying an AHL rookie record, and skated in two games with Boston, registering an assist in his NHL debut. Studnicka recorded 233 points in 252 games with the Oshawa Generals and Niagara IceDogs.

Joey Keane (Barrie, London – 2016-19)
Joey Keane also turned heads over his 58-game rookie season split between the Hartford Wolf Pack and Charlotte Checkers, over which he produced 37 points (9-28—37) placing him second among all rookie defencemen and seventh among the league’s blueliners. Originally a third round pick of the New York Rangers in the 2018 NHL Draft, the 20-year-old defender was dealt to the Carolina Hurricanes organization in February. Keane spent time with the Barrie Colts and the Western Conference leading London Knights over his three-year OHL stint where he amassed 102 points in the 195 games he suited up for.