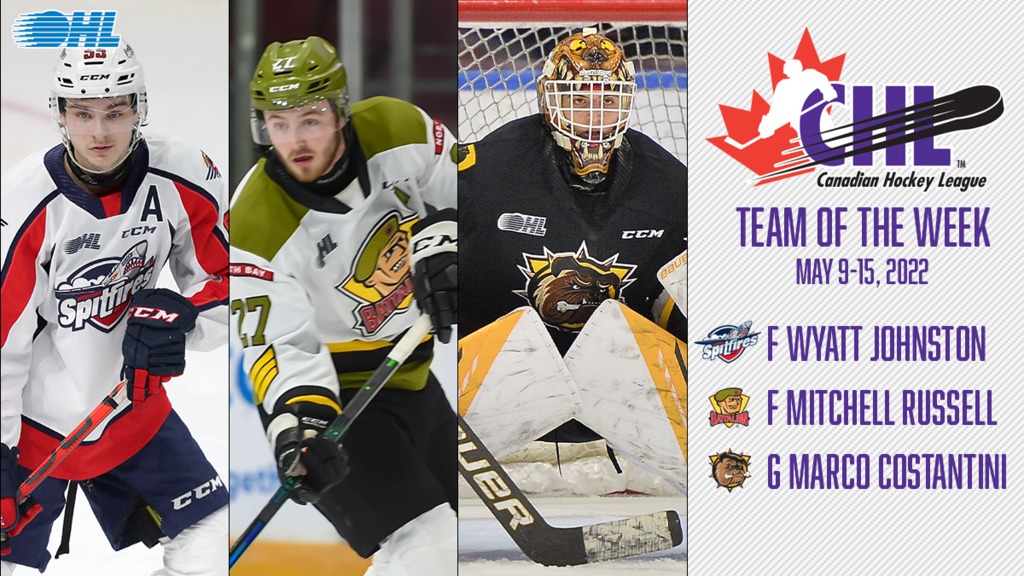 The Canadian Hockey League announced today the 25th edition of the CHL Team of the Week for 2021-22 based on individual performances from May 9-15.

Leading the forward ranks is Dallas Stars 2021 first-round pick Wyatt Johnston of the Windsor Spitfires who through three appearances collected 10 points counting four goals and six assists underscored by Tuesday’s 6-2 road win in Kitchener in which he scored twice and added a pair of assists. For his efforts, the 19-year-old Toronto native was named the OHL Player of the Week. Through the postseason, the budding centre and 2021-22 Eddie Powers Memorial Trophy recipient leads all OHL skaters with 23 points in 11 contests.

Also up front is North Bay Battalion overage right-wing Mitchell Russell who registered eight points counting three goals and five assists in three outings. Among the highlights was Tuesday’s 6-3 road win in Kitchener that saw the product of Barrie, Ont., put together a four-point performance. In all, Russell sits second in OHL playoff scoring with 22 points through nine games.

Rounding out the forward group is New York Rangers prospect Ryder Korczak of the Moose Jaw Warriors who in three outings picked up one goal and six assists for seven points. Facing Winnipeg on Wednesday, Korczak factored in on all three of his club’s goals, notching an assist on each. The 19-year-old Yorkton, Sask., native was later named the WHL Player of the Week in recognition. In all, the talented centre closed out the postseason first in Warriors scoring with 13 points in 10 appearances.

On the blue line, 2022 NHL Draft prospect Tristan Luneau of the Gatineau Olympiques shined as he put up six assists in three outings including a trio of helpers coming in Monday’s 8-5 road win in Val-d’Or. In all, the budding rearguard leads all Olympiques defencemen in playoff scoring with six points in as many games. An 18-year-old native of Victoriaville, Que., Luneau ranks 24th among North American skaters per Central Scouting ahead of the 2022 NHL Draft.

Also on the back end is Charlottetown Islanders overage rearguard Noah Laaouan who registered one goal and three assists for four points in a pair of appearances highlighted by a one-goal, two-assist effort coming in Monday’s 5-0 road win in Moncton. Through five postseason appearances, the Halifax native sits tied for second among Islanders defencemen with five points in as many outings.

Between the pipes, Hamilton Bulldogs 2002-born netminder Marco Costantini found the win column in a pair of outings in which he combined for a .969 save percentage and 0.99 goals-against average underscored by Tuesday’s 35-save performance in Mississauga en route to a 5-0 victory and his first career playoff shutout. Costantini was later named the OHL Goaltender of the Week for his efforts. Throughout the postseason, the hometown product remains undefeated in eight outings while leading all OHL netminders with a 1.87 goals-against average and sitting second with a .931 save percentage. Costantini ranks 29th among North American goaltenders per Central Scouting ahead of the upcoming NHL Draft.