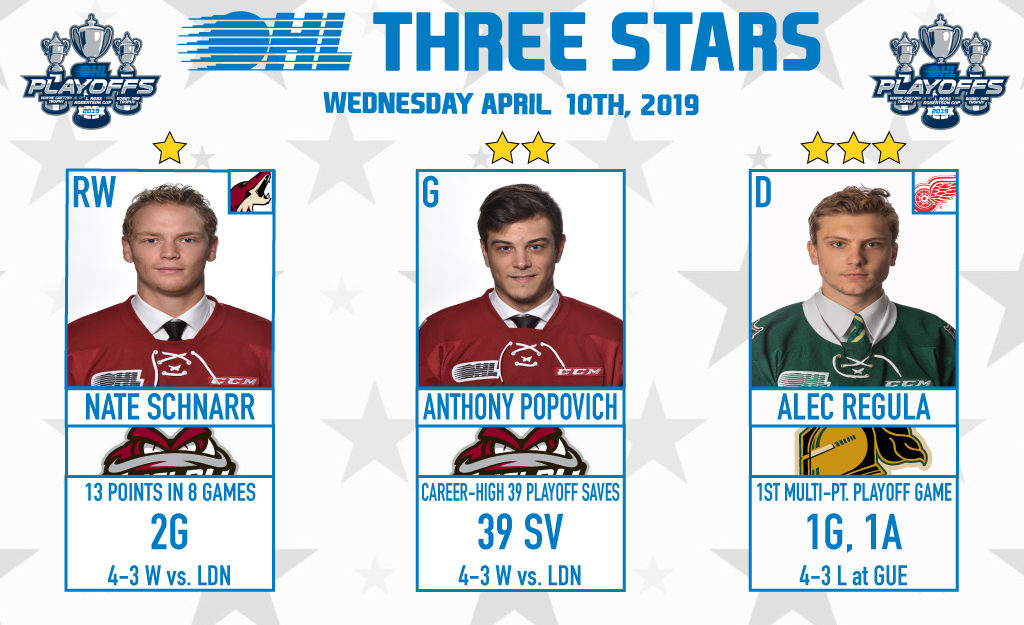 1ST STAR: NATE SCHNARR (GUELPH STORM):
Guelph Storm regular season scoring leader Nate Schnarr netted his third and fourth goals of the postseason on Wednesday, helping his team stay alive in the Western Conference playoffs with a 4-3 win over the London Knights. Schnarr also won 15 of his 22 faceoffs on the night and finished with a plus-2 rating. The 20-year-old from Waterloo, Ont. has 13 points (4-9–13) over eight playoff contests as the Storm now trail the London Knights 3-1 in their Western Conference semi-final series. Schnarr was Arizona’s third round pick in the 2017 NHL Draft.

2ND STAR: ANTHONY POPOVICH (GUELPH STORM):
Guelph Storm netminder Anthony Popovich turned in a 39-save performance, backstopping his team to a 4-3 win over the London Knights in Game 4 of their Western Conference semi-final series. Popovich was particularly strong in the third period, turning aside 16 of 18 London shots as the Knights attempted a late comeback. The 19-year-old from Belleville, Ont. has played to a 5-3 playoff record with a 3.13 goals-against average and .901 save percentage. He attended training camp with the Dallas Stars back in September.

3RD STAR: ALEC REGULA (LONDON KNIGHTS):
Detroit Red Wings prospect Alec Regula scored a goal on Wednesday and set up another as the London Knights fell just short in Guelph, dropping Game 4 by a score of 4-3. The 18-year-old native of West Bloomfield, Mich. has four points (2-2–4) over eight playoff contests. He put up 39 points (11-28–39) over 66 games on the London blue line this past season and was Detroit’s third round pick last summer.

2019-20 Recaps
Saturday Highlights: Ingham the answer against Firebirds
2 hours ago