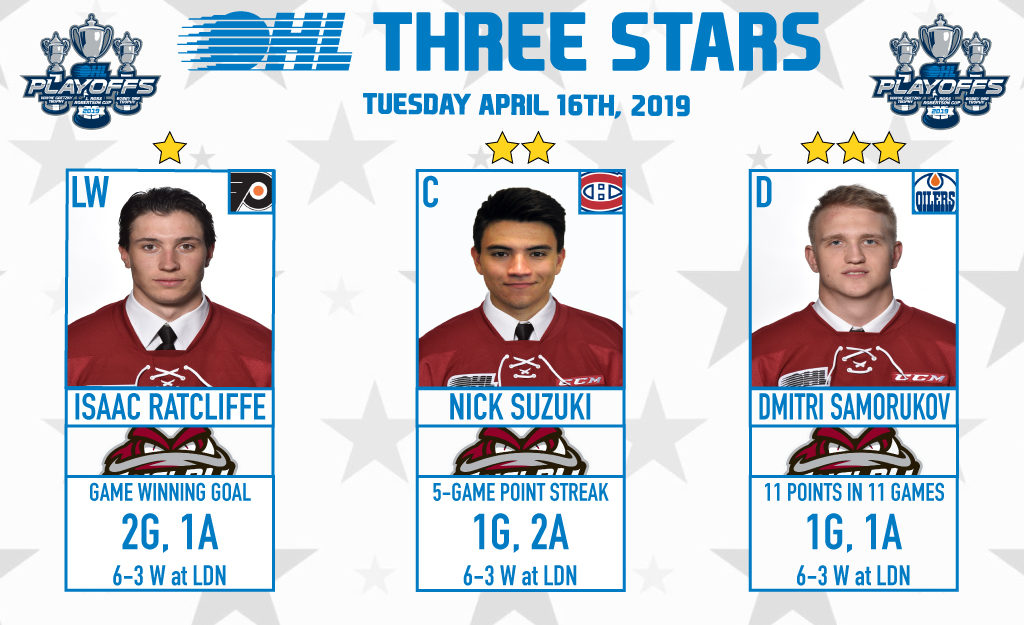 1ST STAR: ISAAC RATCLIFFE (GUELPH STORM):
Philadelphia Flyers prospect Isaac Ratcliffe showed up to play in his hometown of London on Tuesday, scoring twice while adding an assist in a 6-3 Game 7 win over the London Knights. Ratcliffe scored the game winner 3:59 into the third period to help the Storm erase a 3-1 deficit in the contest along with a 3-0 hole in the series. The 6-foot-6 winger has registered 13 points (5-8–13) over 11 playoff contests, helping the Storm reach the Western Conference Championship Series for the first time since their last OHL Championship in 2014. Ratcliffe put up 50 goals and 82 points over 65 games this past season. He was Philadelphia’s second round pick in 2017.

2ND STAR: NICK SUZUKI (GUELPH STORM):
CHL Player of the Week Nick Suzuki continued his tear across the scoresheet on Tuesday in his hometown of London, helping the Storm double-up the Knights in a 6-3 comeback victory. The Game 7 triumphs sees the Storm rally from a 3-0 series deficit thanks to Suzuki’s goal and two assists in the finale. The 19-year-old leads the Storm in playoff scoring with 20 points (10-10–20) over 11 contests, placing him second in OHL postseason scoring. The Montreal Canadiens prospect is in the midst of a five-game point streak, with all five contests resulting in multi-point outputs. Originally a first round pick of the Vegas Golden Knights in 2017, Suzuki joined the Canadiens in a trade in September 2018. He represented Canada at the 2019 IIHF World Junior Hockey Championship.

3RD STAR: DMITRI SAMORUKOV (GUELPH STORM):
Edmonton Oilers prospect Dmitri Samorukov opened the scoring for the Guelph Storm on Tuesday and later added an assist, helping them defeat the London Knights 6-3 in Game 7 action. The Storm climbed all the way back from a 3-0 series deficit and Samorukov saw plenty of action, increasing his playoff point total to 11 points (4-7–11) in as many games along with a plus-9 rating. The 19-year-old from Volgograd, Russia put up 45 points (10-35–45) in his third season with the Storm while also winning bronze with Russia at the IIHF World Junior Hockey Championship. Samorukov was Edmonton’s third round pick in 2017.