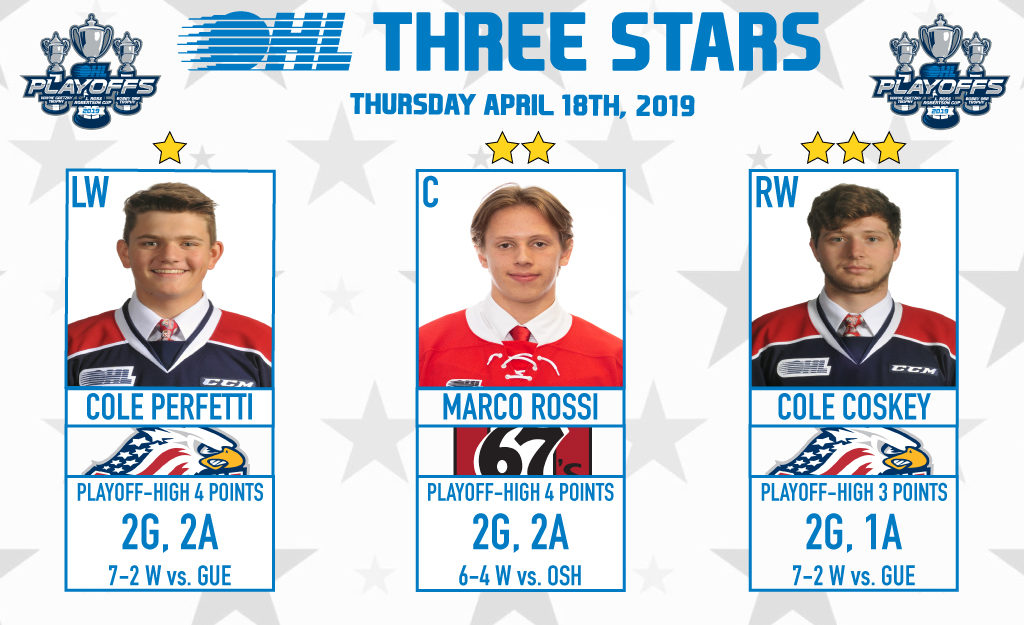 1ST STAR: COLE PERFETTI (SAGINAW SPIRIT):
Rookie winger Cole Perfetti was in fine form Thursday night, scoring twice while adding two assists as the Saginaw Spirit rolled over the visiting Guelph Storm in a 7-2 win. The Spirit open the Western Conference Championship Series with a win thanks in large part to Perfetti’s contributions. The 17-year-old from Whitby, Ont. has 10 points (5-5–10) in as many playoff contests after setting a Spirit single season record among rookies with 37 goals this past season. Perfetti was the fifth overall pick of the 2018 OHL Priority Selection from the Vaughan Kings Minor Midgets. He’ll be eligible for the 2020 NHL Draft.
• GAME HIGHLIGHTS

3RD STAR: COLE COSKEY (SAGINAW SPIRIT):
Veteran winger Cole Coskey scored twice and added an assist as the Saginaw Spirit poured it on, defeating the visiting Guelph Storm 7-2. Coskey scored just beyond the midway point of the second period before striking again with 26 seconds left in the frame to give the Spirit a 6-2 lead. Coskey pitched in with an assist on a goal by Brady Gilmour 2:55 into the second period. The 19-year-old from Zion, Ill. has seven points (3-4–7) over an injury-shortened seven playoff contests. Coskey put up 63 points (31-32–63) over 52 games this past season. He was Saginaw’s third round pick in the 2015 OHL Priority Selection.
• GAME HIGHLIGHTS