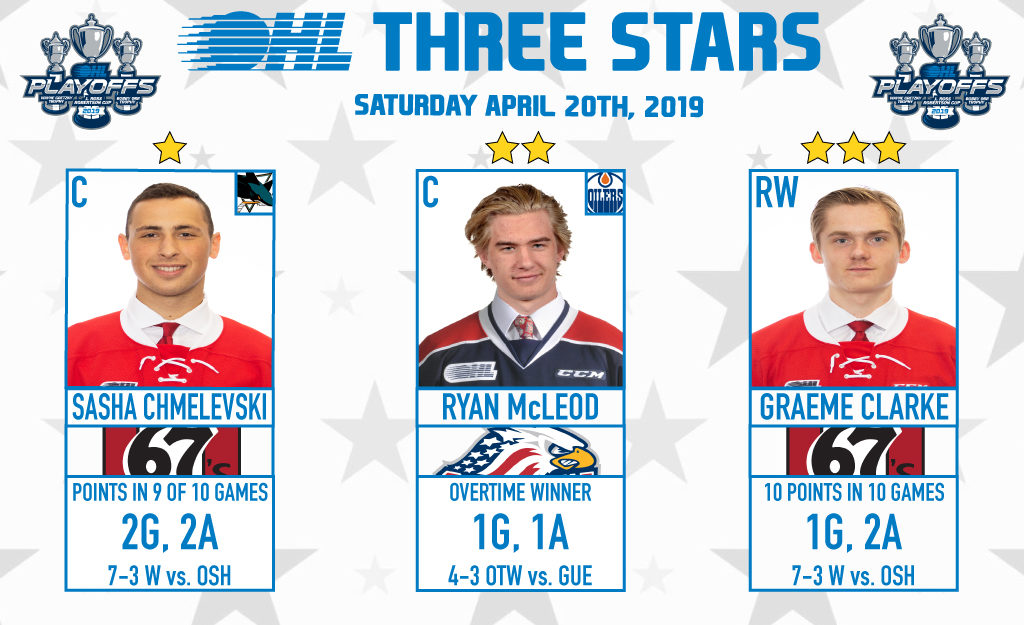 1ST STAR: SASHA CHMELEVSKI (OTTAWA 67’s):
San Jose Sharks prospect Sasha Chmelevski racked up four points, scoring twice while adding two assists as the Ottawa 67’s took a 7-3 win over the Oshawa Generals in Game 2. Chmelevski hit a goal post to be denied a hat-trick in the latter half of the third period and was a force in the faceoff circle, going 15-for-19. The 19-year-old from Northville, Mich. has points in nine of his 10 playoff contests for a total of 19 (6-13–19). A former OHL Scholastic Player of the Year, Chmelevski recorded 75 points (35-40–75) over 56 games this past season. The sixth round pick of San Jose in 2017 won silver as a member of the U.S. National Junior Team this past January.

2ND STAR: RYAN McLEOD (SAGINAW SPIRIT):
Edmonton Oilers prospect Ryan McLeod stepped up as the overtime hero on Saturday night in Saginaw, scoring unassisted 6:52 into the extra frame as the Spirit defeated the Guelph Storm 4-3 in comeback fashion. McLeod danced around three Guelph opponents before chipping a puck under the arm of Anthony Popovich to give the Spirit a 2-0 series lead. McLeod finished the night with a goal and an assist and was 12-for-21 in the faceoff circle. The 19-year-old from Mississauga, Ont. has 12 points (5-7–12) in as many playoff contests following a 62-point (19-43–62) regular season split between Saginaw and Mississauga. The 6-foot-3, 205Ib centreman was an Eastern Conference champion with the Mississauga Steelheads in 2017. McLeod was Edmonton’s second round pick last summer.

3RD STAR: GRAEME CLARKE (OTTAWA 67’s):
2019 NHL Draft prospect Graeme Clarke joined forces with the aforementioned Chmelevski to put up a goal and two assists on Saturday afternoon as the Ottawa 67’s defeated visiting Oshawa 7-3. Clarke assisted on Chmelevski’s first period tally before having the favour returned to him prior to the end of the first frame. Clarke chipped in on Chmelevski’s second of the afternoon midway through the third period. The 17-year-old Ottawa, Ont. product has 10 points (6-4–10) over as many playoff contests. Clarke put up 34 points (23-11–34) over 55 games this past season. He was Ottawa’s first round (6th overall) pick in the 2017 OHL Priority Selection.