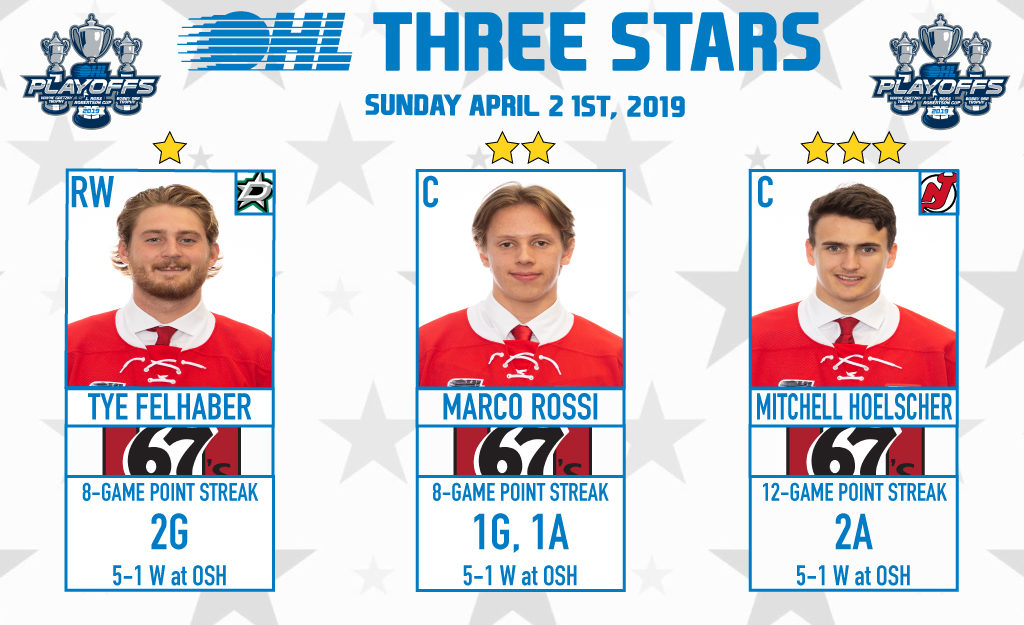 1ST STAR: TYE FELHABER (OTTAWA 67’s):
Dallas Stars prospect Tye Felhaber opened and closed the scoring in Oshawa on Sunday as the Ottawa 67’s skated to a 5-1 victory to take a 3-0 series lead. The Pembroke, Ont. native took a feed from rookie Marco Rossi to tip a puck past Kyle Keyser 10:06 into the opening period before finishing off a nice set up from defenceman Kevin Bahl early in the third frame. Felhaber is riding an eight-game point streak and has 19 points (9-10–19) over 11 playoff contests. The 20-year-old put up 59 goals and 109 points this past season, signing a three-year entry level contract with the Stars.

2ND STAR: MARCO ROSSI (OTTAWA 67’s):
Rookie centreman Marco Rossi continued an eight-game point streak, scoring while adding an assist as the Ottawa 67’s took a 5-1 road win in Oshawa. Rossi found Tye Felhaber alone in front to give Ottawa a 1-0 lead before later stuffing in a rebound on the power play. The 17-year-old native of Feldkirch, Austria had an impressive rookie season in the OHL, putting up 65 points (29-36–65) over 53 games before proceeding to register 15 (5-10–15) over 11 playoff outings. Rossi is considered a top prospect for the 2020 NHL Draft.

3RD STAR: MITCHELL HOELSCHER (OTTAWA 67’s):
New Jersey Devils prospect Mitchell Hoelscher had a pair of assists, setting up a shorthanded goal as the Ottawa 67’s climbed into a 3-0 series lead on Sunday. The 19-year-old from Elora, Ont. has brought energy and grit to the Ottawa lineup throughout the playoffs, registering a point in each of the team’s 11 games. Hoelscher put up 40 points (10-30–40) over 68 regular season games and is a big part of Ottawa’s penalty killing corps. He was New Jersey’s sixth round pick last summer.