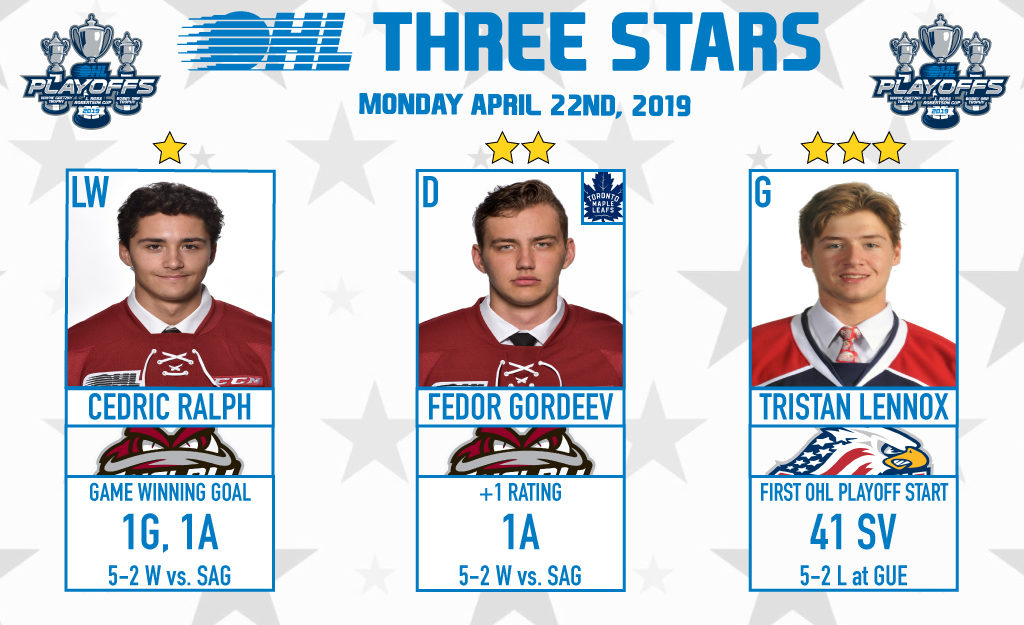 1ST STAR: CEDRIC RALPH (GUELPH STORM):
Cedric Ralph‘s first goal of the OHL Playoffs broke a 2-2 tie 2:20 into the third period to put the Guelph Storm ahead for good in a 5-2 win. The Storm earned a much-needed victory after dropping Games 1 and 2 in Saginaw. Ralph also picked up an assist on Zachary Roberts’ opening goal with 4:11 remaining in the first period. The 20-year-old native of Peterborough, Ont. had 50 points (21-29–50) over 65 games this past season. Ralph was Guelph’s seventh round pick in 2015.

2ND STAR: FEDOR GORDEEV (GUELPH STORM):
Big 6-foot-7 Toronto Maple Leafs prospect Fedor Gordeev set up the opening goal of Monday’s 5-2 Guelph Storm victory and was a physical presence all over the ice, blocking shots to help his team earn its first win of the Western Conference Championship Series. The 20-year-old defenceman from Toronto, Ont. put up 32 points (7-25–32) over 63 games between Guelph and Flint this past season. He was a fifth round pick of the Maple Leafs in 2017.

3RD STAR: TRISTAN LENNOX (SAGINAW SPIRIT):
Saginaw Spirit netminder Tristan Lennox was thrust into action on Monday and handled himself admirably, turning aside 41 shots in a 5-2 road loss to the Guelph Storm. The 16-year-old takes over the Spirit crease after starter Ivan Prosvetov was issued a five-game suspension resulting from actions in Game 2 of the series. Lennox became the first goaltender in his 16-year-old year to start a game in the Conference Finals since Plymouth’s Alex Nedeljkovic back in 2013, keeping his team in the game despite their being outshot 46-22. Saginaw’s second round pick in 2018, Lennox played to a 7-2-1-1 record this past season with a 2.79 goals-against average and .907 save percentage.