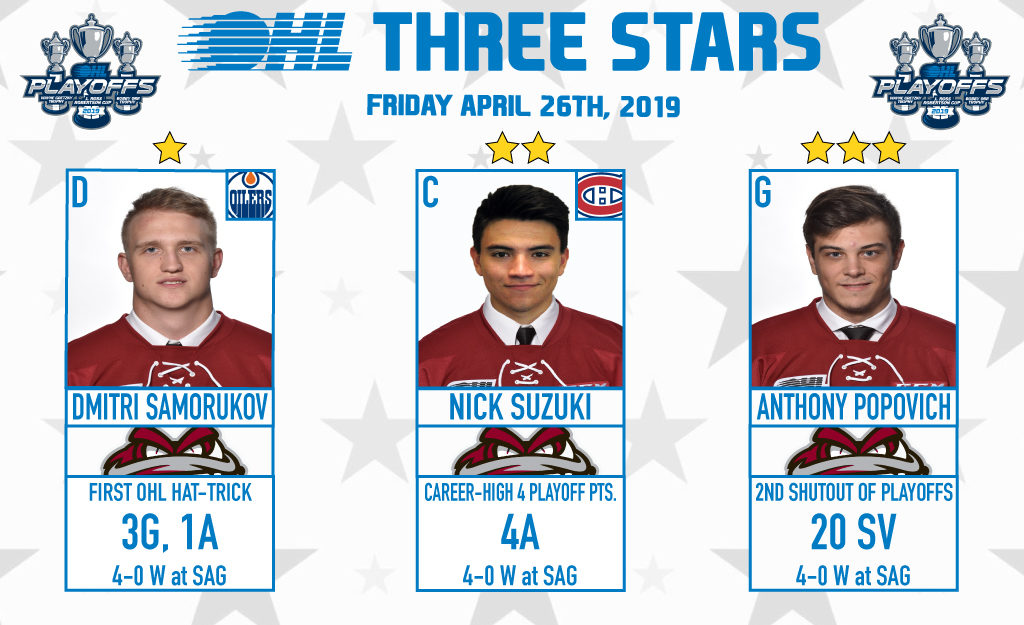 1ST STAR: DMITRI SAMORUKOV (GUELPH STORM):
Dmitri Samorukov enjoyed a career night, posting his first OHL hat-trick as the Guelph Storm skated to a 4-0 win in Saginaw. Samorukov added an assist to get in on all four goals as the Storm stayed alive, extending the series to a sixth game coming up in Guelph on Sunday. The Edmonton Oilers prospect scored twice in the second period before completing his hat-trick 1:44 into the third. The 19-year-old native of Volgograd, Russia has 18 points (8-10–18) over 16 games in the playoffs after posting 45 points (10-35–45) over 59 regular season games. Samorukov was Edmonton’s third round pick in 2017. He won bronze with Russia at the 2019 IIHF World Junior Hockey Championship.

2ND STAR: NICK SUZUKI (GUELPH STORM):
OHL Playoff scoring leader Nick Suzuki registered a career-high four playoff points, picking up assists on all of Guelph’s goals in a 4-0 road win over the Saginaw Spirit. The Montreal Canadiens prospect stretched his point streak to 10 games to give him 29 points (11-18–29), the most by a Storm player in the OHL Playoffs since Kerby Rychel (32 pts.) and Zack Mitchell (30 pts.) exceeded that figure in the club’s 2014 Championship run. Suzuki’s 71 shots on goal also lead the OHL Playoffs as he’s helped the Storm come back to trail the series just 3-2 headed back home for Game 6 on Sunday. The 19-year-old London, Ont. native was acquired by the Montreal Canadiens in a September 2018 trade with the Vegas Golden Knights after he was the 13th overall pick of the 2017 NHL Draft.

3RD STAR: ANTHONY POPOVICH (GUELPH STORM):
Veteran netminder Anthony Popovich stopped all 20 shots he faced on Friday to register his second shutout of the 2019 OHL Playoffs. Popovich was tested in the early going and provided the saves his club needed to take a second period lead. The 19-year-old Belleville, Ont. native is 10-6 with a 3.05 goals-against average and .900 save percentage over 16 playoff outings. He is wrapping up his third season in the Guelph crease after being the club’s seventh round pick in 2015. Popovich attended training camp with the Dallas Stars last September.