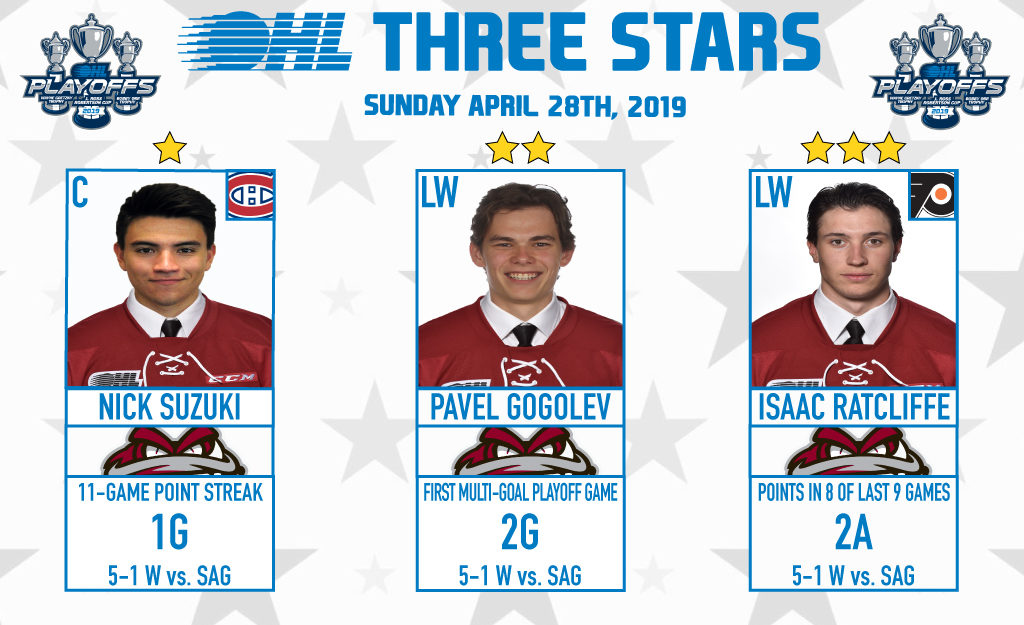 1ST STAR: NICK SUZUKI (GUELPH STORM):
Scoring arguably the finest goal of the 2019 Playoffs, league scoring leader Nick Suzuki earned Sunday’s first star honours as the Guelph Storm defeated the Saginaw Spirit 5-1 to force another Game 7. Suzuki made the score 3-0 with his highlight reel marker 7:52 into the second period, giving him points in 11 straight games for a league-leading total of 30 (12-18–30). The Montreal Canadiens prospect went 15-for-21 in the faceoff circle as the Storm controlled the pace of the game, earning their second straight win to carry momentum into Monday night’s Game 7 matchup in Saginaw.

2ND STAR: PAVEL GOGOLEV (GUELPH STORM):
Guelph Storm winger Pavel Gogolev scored twice in his club’s 5-1 Game 6 victory over the Saginaw Spirit. The Russian flank was a plus-3 on the afternoon and collected six shots on goal to give him seven points (3-4–7) over 17 playoff contests. The 19-year-old had 28 points (10-18–28) over 37 games between Guelph and Peterborough this season. He was originally the Petes’ first round (8th 0verall) pick in the 2016 OHL Priority Selection. Gogolev attended training camp with the Detroit Red Wings last September.

3RD STAR: ISAAC RATCLIFFE (GUELPH STORM):
Guelph Storm captain Isaac Ratcliffe collected a pair of assists on Sunday afternoon to bring his club one step closer to a second-straight playoff round comeback. The Storm defeated the Saginaw Spirit 5-1, coming back from a 3-1 series deficit to force Game 7 on Monday in Saginaw. The 6-foot-6 Philadelphia Flyers prospect has 21 points (9-12–21) over 17 playoff contests after putting up 82 points (50-32–82) over 65 games this past season. Ratcliffe was Philadelphia’s second round pick in 2017.