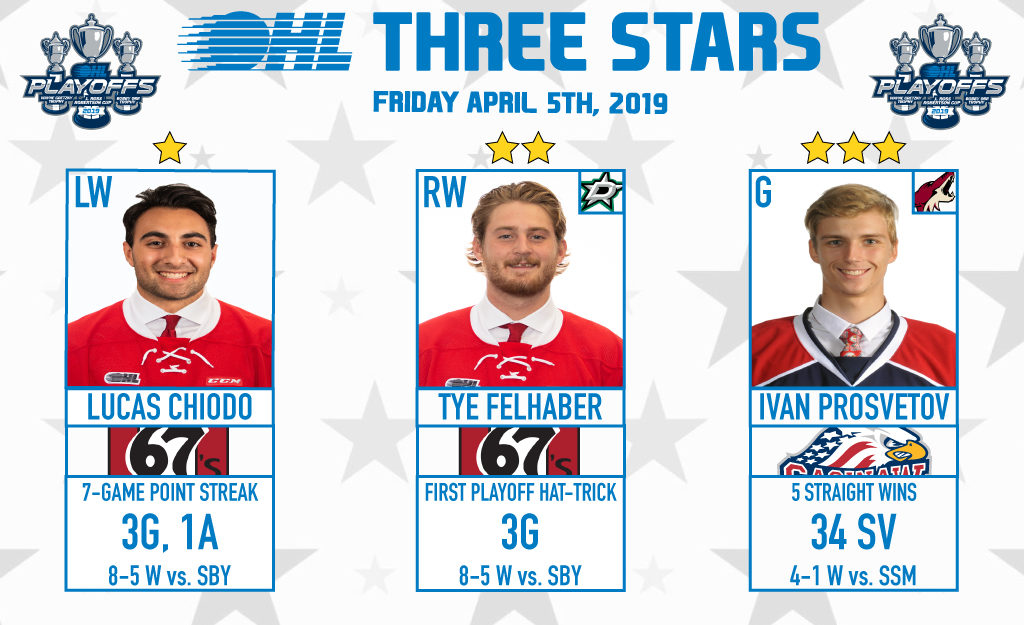 1ST STAR: LUCAS CHIODO (OTTAWA 67’s):
Overage winger Lucas Chiodo extended his point streak to seven games, netting three goals along with an assist as the Ottawa 67’s solved one of the league’s top netminders in an 8-5 victory over visiting Sudbury. The 67’s took a 1-0 series lead, chasing Ukko-Pekka Luukkonen from the crease as Chiodo got the scoring started 9:45 into the first period. He’d strike again 5:41 into the third before completing the hat-trick less than five minutes later. The 20-year-old product of Churchill, Ont. put up 79 points (29-50–79) this past season between Ottawa and Barrie. Chiodo was originally Barrie’s 15th round (293rd overall) pick back in 2014 before skating to a 221-point OHL career over four full seasons. He has 11 points (4-7–11) over five playoff contests this year.
• GAME HIGHLIGHTS

2ND STAR: TYE FELHABER (OTTAWA 67’s):
Dallas Stars prospect Tye Felhaber scored 59 goals this past season and he kept them coming to open up the second round of the OHL Playoffs on Friday night. Felhaber bagged a hat-trick as the Ottawa 67’s skated past visiting Sudbury 8-5. The 20-year-old from Pembroke, Ont. scored twice in the latter half of the second period before finishing his trio on the power play with 5:43 left in the third. Felhaber’s first OHL Playoff hat-trick comes on the heels of scoring three over the course of the past season. Felhaber, who signed with Dallas in early March, racked up 109 points (59-50–109) this past season, finishing his regular season career with 285 (145-140–285) over 311 career contests. He has seven points (3-4–7) over five games in the 2019 OHL Playoffs.
• GAME HIGHLIGHTS

3RD STAR: IVAN PROSVETOV (SAGINAW SPIRIT):
Arizona Coyotes prospect Ivan Prosvetov continues to provide the Saginaw Spirit with what they need to win games. The Russian netminder earned his fifth straight win, making numerous high quality saves as Saginaw defeated visiting Sault Ste. Marie 4-1 to take a 1-0 series lead. Prosvetov, who backstopped the Youngstown Phantoms to an appearance in the USHL Championship Series last spring, turned aside 34 of 35 on Friday as the Spirit held the Hounds to 0-for-7 on the man advantage. The 20-year-old is now 5-0 in the postseason and owns a 1.93 goals-against average and .944 save percentage. He was Arizona’s fourth round pick last summer.
• GAME HIGHLIGHTS