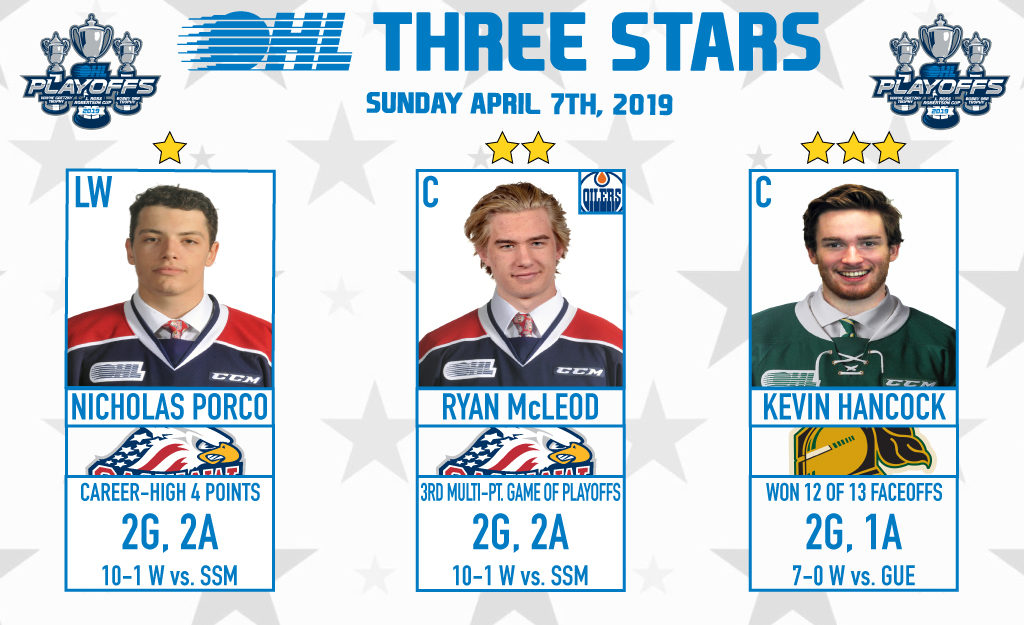 1ST STAR: NICHOLAS PORCO (SAGINAW SPIRIT):
Nicholas Porco opened the scoring in Saginaw’s 10-1 rout of the Soo Greyhounds on Sunday, finishing the night with a career high four points. Porco scored twice and added two assists as the Spirit took a 2-0 series lead. Porco had four shots on goal and was a plus-4 on the night. The 18-year-old from Sault Ste. Marie, Ont. registered his first four points of the playoffs in the game after putting up 36 points (20-16–36) over 67 games this past season. The Vaughan Kings Minor Midget grad was the fourth overall pick of the 2017 OHL Priority Selection. Porco is eligible for the 2019 NHL Draft.
• GAME HIGHLIGHTS

2ND STAR: RYAN McLEOD (SAGINAW SPIRIT):
Edmonton Oilers prospect Ryan McLeod enjoyed a four-point night, scoring twice while adding two assists as the Saginaw Spirit bludgeoned visiting Sault Ste. Marie 10-1 to take a 2-0 series lead. McLeod had six shots on goal, went 9-for-14 in the faceoff circle and was a plus-4 on the night. The multi-point effort is McLeod’s third of the 2019 playoffs, giving him eight points (3-5–8) over six games. The 19-year-old from Mississauga, Ont. registered 62 points (19-43–62) over 63 games between Saginaw and Mississauga this past season. He was Edmonton’s second round (40th overall) pick in the 2018 NHL Draft.
• GAME HIGHLIGHTS

3RD STAR: KEVIN HANCOCK (LONDON KNIGHTS):
London Knights overage centreman Kevin Hancock scored twice and added an assist as the London Knights defeated visiting Guelph to take a 2-0 series lead. Hancock opened the scoring 3:23 into the first period on a set up from Liam Foudy. He scored his second of the night and fourth of the playoffs 2:33 into the third period. The 21-year-old from Mississauga, Ont. was 12-for-13 in the faceoff circle on Sunday, registering five shots on goal and a plus-2 rating. Hancock played in his 40th career OHL playoff contest and has nine points (4-5–9) over six games in 2019. A former fifth round pick by the Owen Sound Attack in 2014, Hancock recorded 107 points (52-55–107) over 70 games this past season.
• GAME HIGHLIGHTS