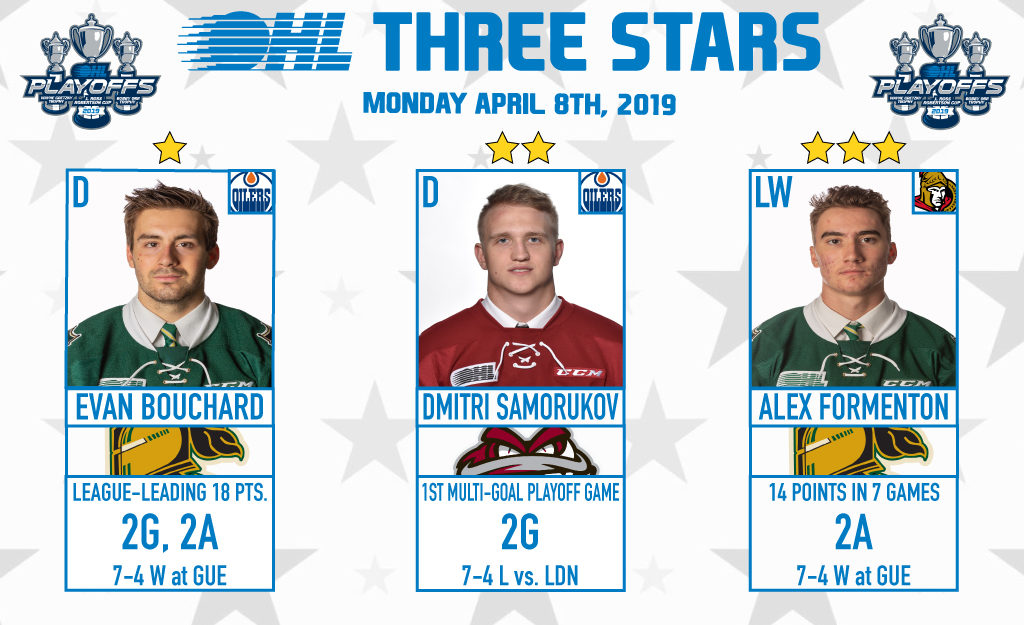 1ST STAR: EVAN BOUCHARD (LONDON KNIGHTS):
Edmonton Oilers prospect Evan Bouchard extended his point steak to nine games, putting up four points in a 7-4 London Knights road win over the Guelph Storm. Eight of Bouchard’s nine games on the current run have been multi-point performances and that trend continued on Monday as Bouchard scored twice and added two assists, helping the Knights take a 3-0 series lead. The four points match a career-high for Bouchard in the OHL Playoffs as he leads the league in scoring with 18 points (4-14–18) over seven games. The 19-year-old from Oakville, Ont. already won a Memorial Cup with the Knights in 2016 and has a total of 32 points (8-24–32) over 35 career playoff contests. Bouchard was Edmonton’s first round (10th overall) pick last summer.

2ND STAR: DMITRI SAMORUKOV (GUELPH STORM):
Another Oilers prospect, Storm defenceman Dmitri Samorukov scored twice in Monday night’s loss. The Russian blueliner fired a pair of shots in from the point, with the first coming midway through the first period before he struck again 4:22 into the second. The 19-year-old has eight points (3-5–8) in seven playoff contests after putting up 45 points (10-35–45) over 59 games this past season. Samorukov was Edmonton’s third round pick in 2017.

3RD STAR: ALEX FORMENTON (LONDON KNIGHTS):
Ottawa Senators prospect Alex Formenton picked up a pair of assists on Monday, giving him 14 points (2-12–14) over seven playoff contests. The 19-year-old from King City, Ont. put up 34 points (13-21–34) over 31 games this past season after he missed time due to a combination of NHL service, World Junior duty as well as an injury. Formenton now has 21 points (7-14–21) over 25 career playoff contests. He was Ottawa’s second round pick in 2017.