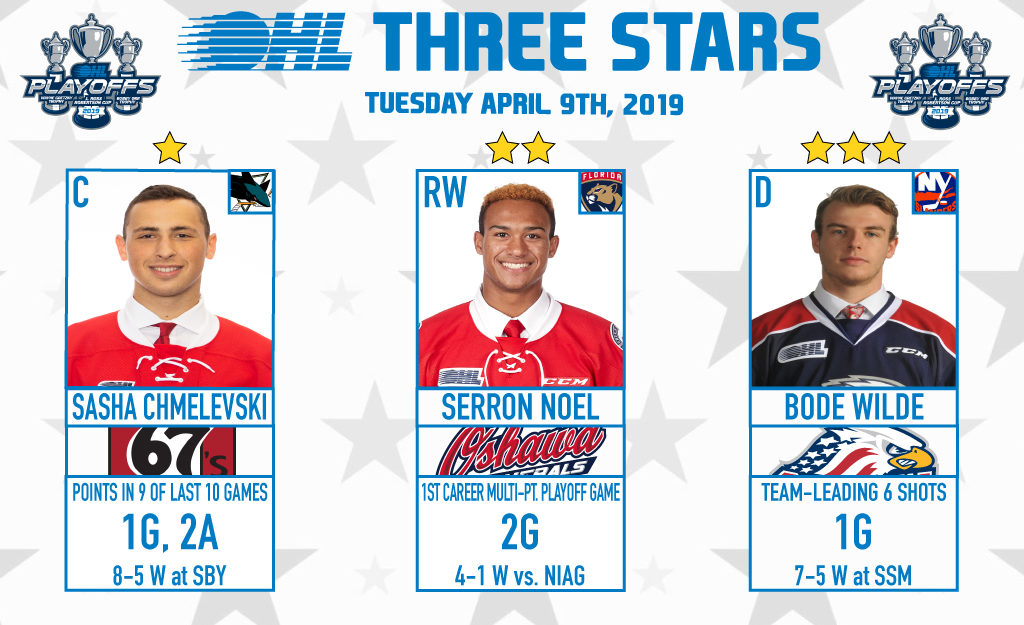 1ST STAR: SASHA CHMELEVSKI (OTTAWA 67’s):
San Jose Sharks prospect Sasha Chmelevski scored and added two assists in Ottawa’s 8-5 road win over the Sudbury Wolves on Tuesday. Chmelevski deked-out Wolves netminder Ukko-Pekka Luukkonen from in-tight 6:05 into the second period for his third goal of the playoffs. He also set up teammates Lucas Peric and Tye Felhaber in the win as the 67’s took a 3-0 series lead. The 19-year-old native of Northville, Mich. has 12 points (3-9–12) over seven playoff contests after putting up 75 points (35-40–75) over 56 games this past season. Chmelevski won silver with the United States at the IIHF World Junior Hockey Championship this past January. He was San Jose’s sixth round pick in 2017.
• GAME HIGHLIGHTS

2ND STAR: SERRON NOEL (OSHAWA GENERALS):
Florida Panthers prospect Serron Noel crashed the net for a pair of goals on Tuesday, helping the Oshawa Generals defeat the Niagara IceDogs 4-1 on home ice and earn their first win of the series. The big 6-foot-5 Noel banged in a rebound with 1:45 remaining in the second period before giving Oshawa some insurance 2:47 into the third, finishing off a play in the goalmouth. The 18-year-old Noel has seven points (3-4–7) in as many playoff games after racking up 81 points (34-47–81) in his third OHL season. The Ottawa, Ont. native was Florida’s second round pick in the 2018 NHL Draft.
• GAME HIGHLIGHTS

3RD STAR: BODE WILDE (SAGINAW SPIRIT):
New York Islanders prospect Bode Wilde helped the Saginaw Spirit recover from an early 3-0 deficit as they charged back to defeat the Soo Greyhounds 7-5 on the road. Wilde scored 7:57 into the second period to pull Saginaw within a goal while also leading the team with six shots on goal in the game. The 19-year-old from Plymouth, Mich. has six points (4-2–6) over seven playoff games after putting up 70 points (19-51–70) over 62 games this past season. Wilde was Saginaw’s second round pick in the 2016 OHL Priority Selection. Was a second round pick of the New York Islanders last summer.
• GAME HIGHLIGHTS